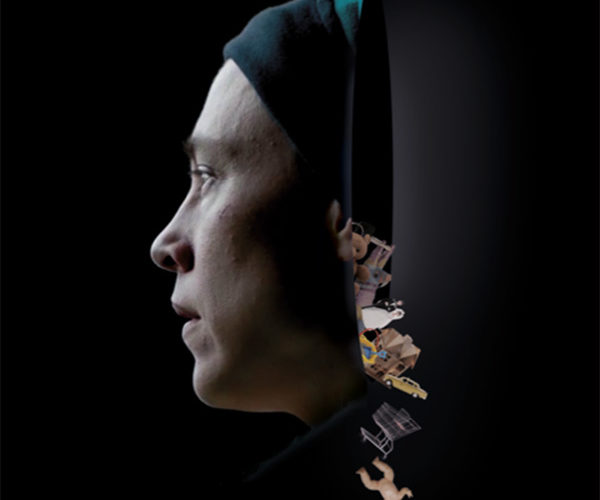 TIFF Review: ‘Retrospekt’ Traps Us in the Prison of a Fractured Mind

I can’t think of a better term to describe Esther Rots’ Retrospekt than her own: “sensory cinema.” We get a feeling for what this means during the opening scene as Dan Geesin’s score and Bas Kuijlenburg’s boomingly operatic baritone drowns out the action onscreen with English lyrics telling a story of which we’re not yet certain is even worth our attention. We don’t know these characters beyond visible traits: a pregnant woman, her husband, and their young girl packed up in an RV heading to who knows where. What this marriage of sight and sound conjures within becomes all we really have to decide to invest in this strange puzzle or frantically seek a quick escape. Hopefully you’ll choose the former because the subsequent ride is worth it.

The woman is Mette (Circé Lethem), a domestic abuse counselor who takes her job very seriously not only because of what it provides her clients, but also how it defines her identity. Her husband is Simon (Martijn van der Veen), by all accounts a loving, supportive husband whose job needs defending whenever it’s mocked or belittled by comparison. The reason this would happen stems from his worrying that their daughter Harrie (Felice and Frederique de Bruijn) is having a difficult time adjusting to her new baby sister. Simon wants Mette to take another three months maternity leave to supervise this adjustment while he goes out of town for work despite the fact her absence sacrifices women desperate for assistance and his “only” postpones numbers someone else can calculate. You may be saying to yourself, “Wait. You said Mette was pregnant. Where’d the new baby come from?” Why express the notion of “sensory cinema” on a scene-by-scene basis when you can wrap the entire film in that aesthetic instead? Rots therefore chose her title with purposeful intent as everything presented is revealed as memories revisited in retrospect. If I’m being completely honest, though, I’m not sure these memories are even wholly real in the sense that they’re experienced as flashbacks from some fixed point in time. The way I see it, we’re trapped within the prison of Mette’s fractured mind as she struggles to find meaning in actions leading towards a tragic accident that might have been prevented if only she had the knowledge hindsight now provides.

Except this incident left her with incalculable physical, psychological, and emotional trauma. After watching that happy family on vacation at the start, we’re taken to an altercation between Mette and an abusive man waiting for his wife amongst the changing rooms of a department store. It’s a harrowing experience to witness, one that finds her tripping over her words when recounting it to her husband. He cracks a joke and suddenly we’re sent down a spiral of anxiety triggered by the return of Kuijlenburg’s voice and an almost hyperventilating rhythm to the imagery before a jump cut sends us towards two futures: one of Mette jogging post-birth and another of her bruised in a hospital bed. Now begins an ever-shifting loop as she furiously attempts to remember. Was that anxiety spiral simply the product of her adrenaline wearing off or was it Mette’s mind recalling the fact that this is where everything started? This was the moment that could have proven the risk she takes at work despite now having children. This was the moment she could have seen the flippant disregard for her wellbeing Simon possessed whether they knew it or not. If she had feared what occurred in that fitting room rather than brushing it off as an anecdote to tell her client/friend Miller (Lien Wildemeersch) — who was struggling to leave her abusive man behind — maybe the nightmares to come would have been prevented. That panicked Mette wasn’t therefore on vacation, but a present-day Mette looking back and horrified at what she missed.

Retrospekt is a series of these types of dual moments existing as both past and present, lesson and regret. It constantly asks questions by showing us the aftermath of scenes we’ve yet to experience as though each traumatic moment of confrontation at the hospital drags Mette down below her mind’s inherent defense mechanisms to prompt a suppressed memory it may not be ready to handle. Who was in the car? (What car?) Why is Miller demanding she remember? (At this point we’ve never even met Miller.) Where’s Harrie and why hasn’t Mette seen her since the accident? (Could she be dead?) These dreadful scenarios haunt us because we’re helpless to do anything but wait as the truth of what occurred slowly comes into focus against the off-putting opera. It really is an experience like no other with each shift in time proving just as easily overlapped as shown in sequence. Heightened states of emotions conjure amplified confusion, the painful moments of pointed inquisition after the accident jumbling Mette’s thoughts in a similar way to her words. Things get so uncomfortably severe that the camera will sometimes push in with a violently swift jolt of contact, scaring her to tears. All these external forces are colliding to metaphorically shake her awake while her brain remains determined to fend off such horrors until she’s better healed. Sex becomes equivalent to abuse as sound is drowned out into electronic noise with pleasure and desperation converging through the physicality of the act. Everything is a provocation, everything steeped in terror.

Lethem delivers a revelatory performance moving back and froth between joy, laughter, frustration, and despair. The jumbled narrative often shows how friendships progressed before learning their rocky starts, recovery before rehabilitation. It’s a choice by Rots that consistently reminds us how appearances never supply the whole story. A smile is just as easily a mask as a genuine expression of happiness or love. Too often we watch both Lethem and Wildemeersch turn on a dime to move from contentment to paranoia, their safety forever in flux at the hands of predators and temperamental men devoid of the patience or understanding to rise above gross generalizations. To look back on one’s mistakes is to too often acknowledge how blinded we are to dangers we easily recognize in others.