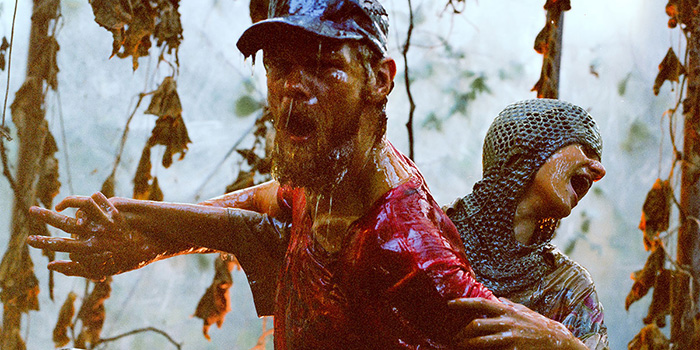 TIFF Review: ‘Resin’ is a Dark Thriller Centered Upon a Close-Knit Family of Hermits

Published in 2015, Ane Riel’s novel Resin found itself the winner of four major Scandinavian literary awards on its way to international bestseller status. It’s no wonder then that it would be optioned as a film so soon afterwards by fellow Danes Daniel Borgman (director) and Bo Hr. Hansen (screenwriter). A dark thriller centered upon a close-knit family of hermits, the story unfolds as though of two worlds: theirs and ours. Jens (Peter Plaugborg) and Maria (Sofie Gråbøl) created this division intentionally as an irrational fear born from some unknown source of paranoia takes hold. Untrusting of the world that bore them, they decide to fake their daughter’s death as a means to sever their societal ties and protect young Liv (Vivelill Søgaard Holm) from its corruption. The opening scene therefore epitomizes this duality as Jens screams Liv’s name from the water. He’s inconsolably distraught with neighbors grabbing at his drenched sweater so as to prevent him from drowning too—if that’s indeed what happened to the girl. More townsfolk arrive at the shore to begin their own searches while Jens lifts himself up to head home. There he meets his wife, a silent expression all that’s necessary to answer her query, “Did they believe you?” Why wouldn’t they after a show like that? They surely did everything possible to help them too before the couple made their isolated home at the top of this small island off-limits to outsiders. Now they could raise Liv without modern dependencies so she’d want for nothing but them.

It might not be an apt comparison considering I didn’t read Resin and didn’t see Terry Gilliam’s Tideland, but having the former’s film and latter’s book together in my mind is making it so I cannot stop thinking of both. The heavy air of death and disrepair that hangs over Jens’ home and this idea that he speaks to his dead father for wisdom, clarity, and premonitions recall the visceral descriptions in Mitch Cullin’s surreal fantasy. We’re simultaneously drawn to the family and their unorthodox existence (Jens teaching Liv to hunt and know everything nature has to offer while Maria lies bedridden, too obese to move) and the girl’s growing curiosity towards that which is forbidden (nightly adventures to town spying upon Amanda Collin’s newcomer Roald). Danger lurks as Liv risks exposure to taste food she’s never eaten and study a woman she’s never met. The same can be said for Jens too, though, as his quest to protect his daughter gradually warps his mind towards a precipice from which he might not be able to turn away. How does he react upon noticing a bracelet around Liv’s wrist that he didn’t give her? How does he cope with the unannounced return of his mother Else (Ghita Nørby) after years apart? The stress of maintaining appearances is rising as new tidings for the future beckon right when the past that so frightens him decides to turn its gaze back their way. And with every impossible choice made, Jens forgets even more of his humanity.

The result can often be tough to watch since Borgman has no desire to soften the atmosphere Fiel’s off-the-grid setting provides. While the title alludes to the metaphoric preservation of Jens’ optimal world—a figurative cocoon surrounding their lone house on a hill from the “liars” and “cheats” in town—it also takes physical form within the plot itself. Resin becomes a sort of medicine he and Liv slather upon Maria to cure her of her ailment, its embalming properties hopefully rejuvenating her body so she may walk again by summer. That which is meant to heal therefore proves poisonous and that which is meant to protect proves threatening until Liv is unsure of everything around her. Who is the villain? Roald’s melancholic innkeeper or Jens’ unpredictable totalitarian? Plaugborg is the easy standout being that he’s the one whose sanity loosens its grip on reality. The warmth his Jens shows Liv and Maria is love incarnate and in some respects his vitriol towards anyone crossing their path uninvited is too. This isn’t, however, his story. He might be the architect of their environment, but it’s Liv who’s struggling to find her place within. Newcomer Holm wonderfully imbues the character with an innocent curiosity that often turns to confusion when the person she trusts most appears to be doing bad things. Jens can write-off his violence as a source of protection and/or easing of victims’ pain, but his daughter’s heart knows something is wrong even if her mind is willing to ignore it without a sufficient alternative.

That comes from Roald with conflicted results. Having her outsider as the key to coaxing Liv from her well-meaning but dangerous prison proves a necessary component to the whole, but giving her a convenient back story with which to force empathy upon her can feel a bit false. Perhaps Borgman didn’t have enough time to sufficiently provide Roald’s innkeeper the depth to earn her tragedy, but it might have been better to just let her be a compassionate soul in the right place at the right time to help the girl without making the act itself become a means of personal atonement. The latter doesn’t affect the natural course of things in the end, though, and this world and its authentic characterizations ultimately prove Liv must save herself.