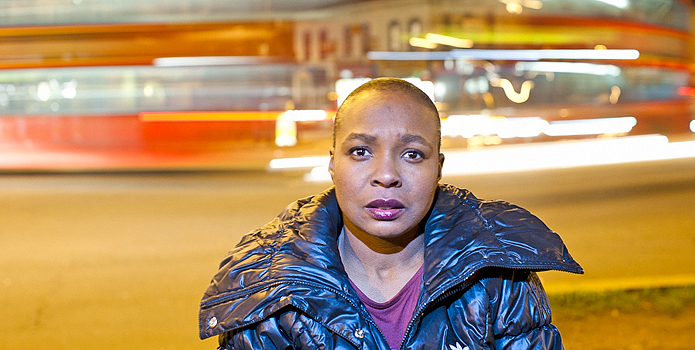 I’m not sure there’s a way to discuss Random, an adaptation of a one-women show, without discussing the random event at the core of the film. A film like this doesn’t require “shock,” so much as the value of the film is in its construction. It’s an effecting emotional journey and if you wish to see it cold (as I you should see anything), than you should know I recommend and avoid this rest of this write-up.

Random is a poetic symphony of images, language and identity. Director Debbie Tucker Green is an English playwright and the winner of 2004 Lawrence Oliver award for most promising in that category. She has delivered on this promise. Random is a short feature film adaptation of a previous work, and it keeps theatrical conventions: it is narrated and performed bravely by Nadine Marshall. The incident at the core of the film concerns a random attack that kills her son. She’s a random women going about a random day, not receiving a text from her boyfriend, hating her bickering co-workers and contemplating if she should have warn heavier clothing (I can relate, I saw it on a chilly night in Toronto).

Much of this reminds me of September 11th, 2001 – I remember waking up, heading to the gym in my small New Jersey town, it was a beautiful day and watching the morning news broadcast from ABC 7 while on the treadmill. I thought, “just a normal day in New York City.” That it was not. Throughout the first 45 minutes of its 58 minutes, we ponder what is Green up to and the film garbles primarily black identity (as well as race relations forced as a result of multiculturalism) in London, having a suspicion of the police and even being racially profiled perhaps. It concludes with some blame and some resentment over life decisions. The process of grieving is dealt with in real-time, that day.

The film, for the most part works: it’s a visual symphony adding flesh and blood characters to the one-women show, which seemingly would be more fit for a radio play. The result is a cinematic hybrid, far less awkward than Tyler Perry’s For Colored Girls which tried to merge the playwright Ntozake Shange‘s poetry with the accessibility of Perry previous melodramas. Theatre and cinema are different beasts, both with freedoms and limits. Random assembles images around a powerful monologue that is sharp in its immediacy and candor. However, I believe I would have preferred to see the performance of this one women play than the film.