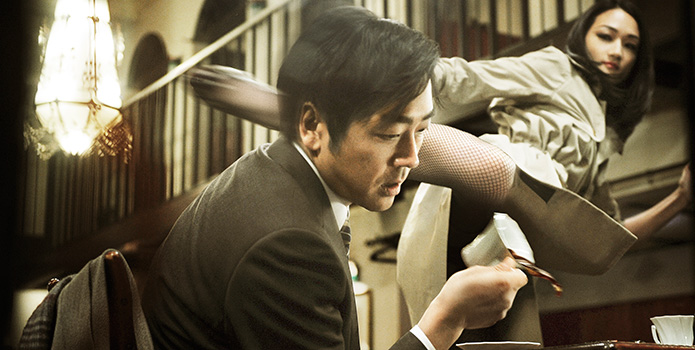 What do you get when you cross one of Japan’s most influential comedians, a premise similar to The Game — but with a zany wild streak of subversive humor — and a whole lot of S&M? The answer is Hitoshi Matsumoto‘s R100, a film following the mild-mannered Takafumi (Nao Ohmori) as he descends into a world of painful pleasure, the likes of which he wasn’t prepared. Similar in tone to his previous film Scabbard Samurai, I fortunately didn’t have to worry about bridging the cultural divide for complete coherence like I did there. It’s not because this one was made with a Western voice or possessed a stronger story, however. No, there was little struggle to figure out what was going on because Matsumoto decided to purposely go as absurd as he possibly could.

Takafumi works a dead-end job while his father-in-law (Gin Maeda) watches his son Arashi (Haruki Nishimura) at home. With the depression from visiting his comatose wife Setsuko (You) at the hospital everyday for three years finally setting, this suburban dad decides to go to the extreme in reigniting his pleasure zone. Such a thought process finds him pressing the intercom button of an all-inclusive kinky club called Bondage wherein a contract is drawn up for one year of service. The rules are simple—no touching, no violence, no initiating contact, and no canceling your subscription—as a slew of dominatrices known as “Queens” become tasked with surprising him in public to whip/punch/kick him into submission until an erotic release visually manifested as blackened eyes and an ethereally rippling aura erupts. And while it’s all fun and games at the start with swift kicks to the head at a coffee shop, brutal beat-downs on the street, and slapped sushi to the point of decimation eaten while onlookers slowly bow their heads in silent embarrassment, the sexual eccentricities inevitably spill into his work and home life too. The dial turns to eleven once Arashi gets involved in the sick and twisted games while new bondage artists appropriately named The Gobble Queen (Hairi Katagiri) and The Saliva Queen (Naomi Watanabe) do their worst to completely humiliate their target. Eventually things go so far that a strange man (Atsuro Watabe) enters the fray saying he’s a secret agent trying to help facilitate an escape. Then come an accidental death and the vengeful wrath of Bondage’s formidable American CEO (WWE’s Lindsay Hayward).

As hilarious as it is disturbing, Matsumoto doesn’t stop at the lunacy of Takafuni’s ill-advised recreational proclivities. He also goes meta on us by positioning a group of film producers into cut scenes, with commentary about R100’s plot holes and outlandish choices, as they watch what we’re watching inside the movie. So, every time you smack your head in utter amazement that any writer or director would ever be so boldly nonsensical as to do whatever earned your self-flagellation, these anachronistic characters arrive to defend your incredulity. The version these “tastemakers” are watching is the product of a one hundred-year old director who believes no one younger than he could ever understand what’s going on (hence the title’s play on the Japanese rating system). Unsurprisingly, they continue to be as confused as us. Matsumoto throws whatever he can at the wall, whether it sticks or not, with parodies of reality television confessionals, Bondage’s comically sexy pool lounge with “Queens” swimming in black, and a high speed chase wherein the predator follows the victim by a trail of Arashi’s slobber shaking out the window like a dog’s. And this is all after it started pretty seriously—save the public abuse and fantastically surreal merry-go-round introduction to Takafuni’s new domineering friends. With the family strife and Setsuko’s coma weighing heavily over everything, you wouldn’t be blamed for thinking there would be some well-intentioned moral coming in due course. But no, Matsumoto is simply giggling to himself as the slow drama makes way into hilarious nonsense—the likes of which he even joins as an overly pragmatic cop.

To give anymore detail would be to ruin the unique experience of diving into this crazed director’s exercise in pushing the envelope. A cinematic interpretation of Beethoven’s “Ode to Joy” filtered through the sexual taboo of Japan—watching bystanders divert their eyes and mind their own business while Takafuni gets his butt kicked is a highlight—R100 will entertain and perplex. Don’t go wasting your time trying to decipher what the overarching message is, though, because you only have to watch the end credits tag to see how your critical doubles inside the film can’t find one either. Just enjoy the escalating departure from reality as Ohmori eclipses masochistic pleasure towards a desire for sadistic fun. When it comes to finding a joke, Matsumoto proves that successful comedians have no limits.

R100 is currently screening at TIFF and one can see our complete coverage below. See the U.S. trailer above.