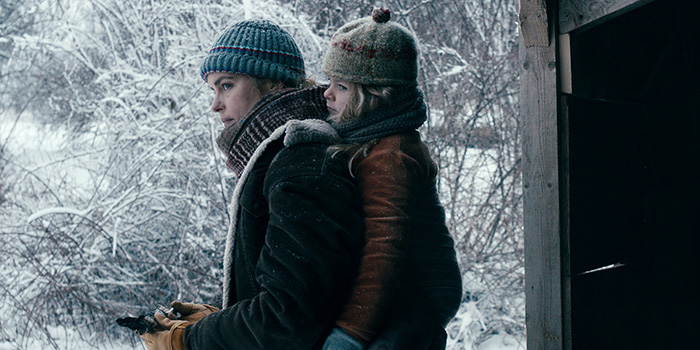 TIFF Review: ‘Pelican Blood’ is a Psychological Supernatural Thriller About a Mother’s Love

Writer/director Katrin Gebbe is not messing around with her latest film Pelican Blood. What starts as a psychological drama about a mother desperate to provide her new daughter the love necessary to free her from the demons of a traumatic past gradually escalates into a supernatural thriller augmenting what science attempts to prove. So while the explanation of a piece of artwork depicting a pelican that pierced its chest to reanimate its dead children with its blood first appears as metaphor, it just might be transformed into a darkly hopeful reality of rebirth. The film is ultimately about a mother’s love refusing to falter after the world has told her enough is enough. When everyone gives up on young Raya (Katerina Lipovska), Wiebke (Nina Hoss) remains stalwart.

Is it strength that keeps her by the girl’s side after everything that happens or irrationality, though? Most gave her the benefit of the doubt at first considering the obvious struggle that comes with adopting a child and uprooting her from another country. But Wiebke had done it before with older daughter Nikki (Adelia-Constance Ocleppo) and their relationship is fantastic. The assumption was therefore that Raya would go through similar growing pains before coming out the other end with just as much love. So smashing a plate is easily dismissed as testing boundaries. Biting her sister gets chalked up to fear. And setting a fire becomes … you get the idea. Raya forever escalates, Wiebke holds her tighter, and the rest search for a hasty escape.

You can’t blame them either once the child begins to impact their lives too. Whether knowing that something happened between Raya and Wiebke’s friend’s young son or listening to the anger in her preschool teacher’s voice after numerous incidents endangered the wellbeing of other students, the moment of saying the other parents are overreacting has passed. It’s time for Wiebke to really see what’s going on by delving into Raya’s history and listening to a psychologist’s recommendation as far as supplying the girl much-needed help. What she hears, however, can and will still be misconstrued by empathy and perhaps a little pride to fit her desire to be the hero. Acknowledging the wounds Raya has endured only makes Wiebke want to heal her more—but at what cost?

There’s Nikki to consider. Already a victim of attacks, her safety must be considered. There’s a potential romance with a mounted police officer (Murathan Muslu’s Benedikt) from the precinct Wiebke has been renting a stable to for training the horses to remain calm during chaotic protests. And there’s her job itself. The captain in charge (Yana Marinova’s Sigrid) sees that Wiebke has become distracted and grows frustrated by her waning professionalism. Is Raya more important than all this? Should she come first before family, love, and career? It’s easy to say yes because she’s in pain and desperately needs stability, but actually doing what’s necessary to provide that security is much more difficult. Survival means Wiebke treating home like a prison (“weapons” lock, motion detectors, etc.). It’s exhausting. And here we are anticipating the worst. All signs eventually point to the type of tragedy that moves beyond the realm of forgiveness. We’re literally waiting for Kaya to kill someone in his/her sleep because it seems nothing less than that horror will get Wiebke to open her eyes. What she does to try and restart her daughter’s brain into feeling emotions again goes well beyond the threshold of “normal” and people have begun noticing. Soon they must worry about her health as well as the girl’s because the anxiety, shame, and panic is making her unable to be the person everyone else who counts on her needs. Wiebke lets Kaya completely take over her life and finds herself willing to try anything to solve what ails her.

This is where the line blurs between reality and fantasy because Kaya is vehement about not wanting to do the things she does (if she admits doing them at all). In her mind a creature she draws on the wall in black perpetually looms above to cajole her into causing trouble—a defense mechanism that protected her from the grim events her young mind refuses to fully comprehend. It’s numbed her from love because the only love she’s ever known was abruptly ripped away. So it works hard to ensure anyone who dares try and get close will eventually run for the hills because pushing them away is less painful than abandonment. The more Wiebke bucks the trend by staying, the worse its suggestions to Kaya become.

There’s a very direct correlation between giving Kaya and a horse (named Top Gun) everyone but Wiebke and the officer riding it has given up on a second chance. At one point that woman puts herself in danger to prove her love just like Wiebke does with her daughter and something clicks—albeit not in the way conventional thinking would presume. The idea that humans must be protected above animals spills over to this family in ways that crudely compare Kaya to a wild beast. Is it apt? Maybe. But that doesn’t render her life and future forfeit. What does it say about humanity that we constantly look for easy answers and comfortable solutions by embracing willful ignorance to desert those who need us and deserve our compassion most?

Hoss is wonderful as this mother who’s unsure of what to do. Her worry for Nikki makes that struggle worse because letting one daughter down is akin to letting both down since she’ll experience it as a failure to fulfill her role as a parent—something for which her desire to be a working single mom already attracts ridicule. Respect in herself might therefore drive her actions at the start, but Kaya’s psychological dependency quickly replaces it. Lipovska delivers an unforgettably intense performance in that role with her ability to change moods on a dime and visibly manipulate her emotions proving scary. So much of what works throughout Pelican Blood hinges on our belief that this girl can destroy them all and she absolutely earns that fear.