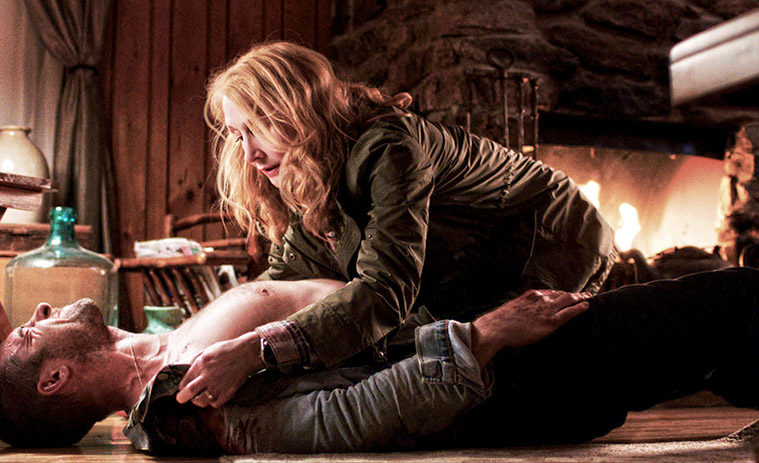 After enjoying Ruba Nadda‘s Inescapable and hearing praise for Cairo Time I was intrigued by her latest effort, October Gale. For whatever reason Nadda doesn’t seem quite certain about what she wants from her plot. Is it a Nicholas Sparks love triangle for the middle-aged between a still grieving widow (Patricia Clarkson‘s Helen), the memory of her husband James (Callum Keith Rennie), and the much younger man (Scott Speedman‘s William) who drifts onto her island cottage’s shore? Is it a Straw Dogs-like thriller where Helen and William must make a last stand against his pursuers in the midst of a giant storm? Or is it simply a tonally all over the place mess?

Sadly I must answer with the latter because when I wasn’t laughing at the absurdity of where things go—helped by an intrusively manipulative score—I was bored out of my mind waiting for long silent stares hiding nothing to finally turn into action. With stilted dialogue and soapy melodrama bolstered by Helen’s recollections of the past that are beyond washed out and unfocused for unnecessary effect, it’s hard to stay attentive. Especially when the inevitable confrontation that’s so slow in coming to fruition reveals itself to be harboring no suspense. It’s a real shame, too, because the first act at least had me invested in an All is Lost one-woman show about coping with loss and moving towards the future. What it became, though, was something completely different. I desired to know more of William’s story–a strange motivating factor considering Helen’s the lead and I should be caring about how she takes the drama unwittingly thrust upon her. The difference between them is that the script purposefully shroads his past in secrecy while conversely sprinkling details about her in faux subtlety. Whereas his tattoo ‘Emily’ as well as the incident that led to a bullet being lodged in his shoulder intrigues, we glean she’s a doctor (“What about your patients, Mom?”) before she helps him for no other reason than the Hippocratic Oath. We never learn how she knows what she does whether surgery, target practice, boating, or cribbage. We only get those things from William because he’s the newcomer. Handled as it is, Helen becomes a pawn in his story rather than vice versa.

A more interesting movie would therefore be going back to Calgary and seeing William’s past as told by Tim Roth‘s not so mystery man. That’s not to say Helen’s backstory isn’t captivating, Nadda simply doesn’t seem to care, so why should we? Everything that works at the start thanks to a strong, emotive performance by Clarkson is rendered moot once the thriller aspect comes in anyway. Speedman could have entered the fray to help her acknowledge James is gone without a revenge thread distraction that’s as convenient as it’s flimsy. Unless her late husband was engaged in a similar out-for-blood scenario to trigger more flashing whiteout memories of him being goofy and loveable. As for the weird chemistry sparking between Helen and William: is it meant to be healthy? To me it has surrogate replacement for true love written all over it.

There isn’t really too much more to say without ruining the one semi-surprising revelation by the end thanks to a screen-chewing Roth having fun in a small role. Helen wants to be alone at the cottage to remember James while doing all the things he used to do. She finds a dying man and nurses him to health. The two end up stranded to await a confrontation that warrants two lonely gunshots and yet provides enough steamy action to coax some adrenaline pumping lust between two strangers who have literally known each other for hours. The rest is silent planning, hot tempers, and a whole lot of buried guilt neither Helen nor William are willing to let go of yet. Unfortunately for us Nadda can let go of the couple cool long shots and pans to finish with a much more conventional aesthetic.

Knowing now what it becomes could help the second viewing I’m pretty sure won’t ever happen, so perhaps tempering your expectations can assist your enjoyment. Honestly, when I compared it to Nicholas Sparks fare at the beginning I wasn’t joking–I think October Gale could find an audience with fans of his work. Those seem to be pretty clunky in their hybridizing genres too and no one seems to mind. I’m just not sure turning a love story into Rambo-lite was an effective way to go.

October Gale premiered at TIFF. See our complete coverage below.