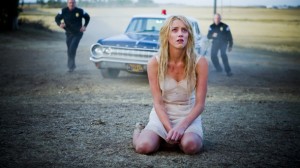 [TIFF Reviews] Meek’s Cutoff, The Debt, and The Ward

As TIFF winds down, I wanted to highlight some of the other films I’ve seen at the fest. You can check out our complete coverage here for most of the big ones, but I’ll be gathering quick thoughts below and in more posts the next few days.

From the opening shot, as the 3-wagon troupe embarks on an agonizingly slow trip crossing the river, director Kelly Reichardt lets us know this is a new take on the Western. Her Wendy and Lucy star Michelle Williams returns for the sparingly bleak look at a 1845 trip through the Oregon desert. The brilliance, aside from the gorgeous cinematography reminiscent of Days of Heaven, lies in the struggle. Reichardt, in an exceptional single shot, shows how long it takes Williams’ character, Emily Tetherow to just load and fire their rifle. Accompanied by the nearly unrecognizable Bruce Greenwood, this is a fascinating look at desperation. [9/10]

From a script by Kick-Ass partners Jane Goldman and Matthew Vaughn, as well as Peter Straughn, one can expect a few flourishes to this otherwise standard thriller. That is pretty much what you get with John Madden‘s latest. It tells the flashback story of three Mossad Agents who need to capture a Nazi war criminal, and how that effects them in the present day. Sam Worthington does drama just fine, but the film really got me intrigued with Jessica Chastain, who will be seen in Terrence Malick‘s The Tree of Life. The story structure is what I found lacking suspense. They attempt an interesting present/past connection but it was difficult to provoke much interest in their mission, especially near the end. It’s a decent thriller thanks Madden’s experienced style, but missing the spark to make it truly excel. [6/10] The question of why John Carpenter picked this project to return to after a 9-year hiatus never left my mind while watching this less-than-TV quality garbage. Following a group of girls at psych ward, this “suspense/horror” flick brings absolutely nothing new to the table. Even if its purpose was to simply recreate the elements the genre is known for, it’s execution is a crushing disappointment. The acting from group, including Lyndsy Fonseca, Amber Heard, Danielle Panabaker and Mika Boorem is completely lifeless and awkward. When I wasn’t praying for their brutal death, Carpenter injects filler after filler scenes that add nothing. To cap it all off, the laughable twist has been done before with much greater weight this past decade. I’m looking at you Scorsese and Mangold. The one point I’ll give is dedicated to the classic John Carpenter‘s The Ward title. [1/10]