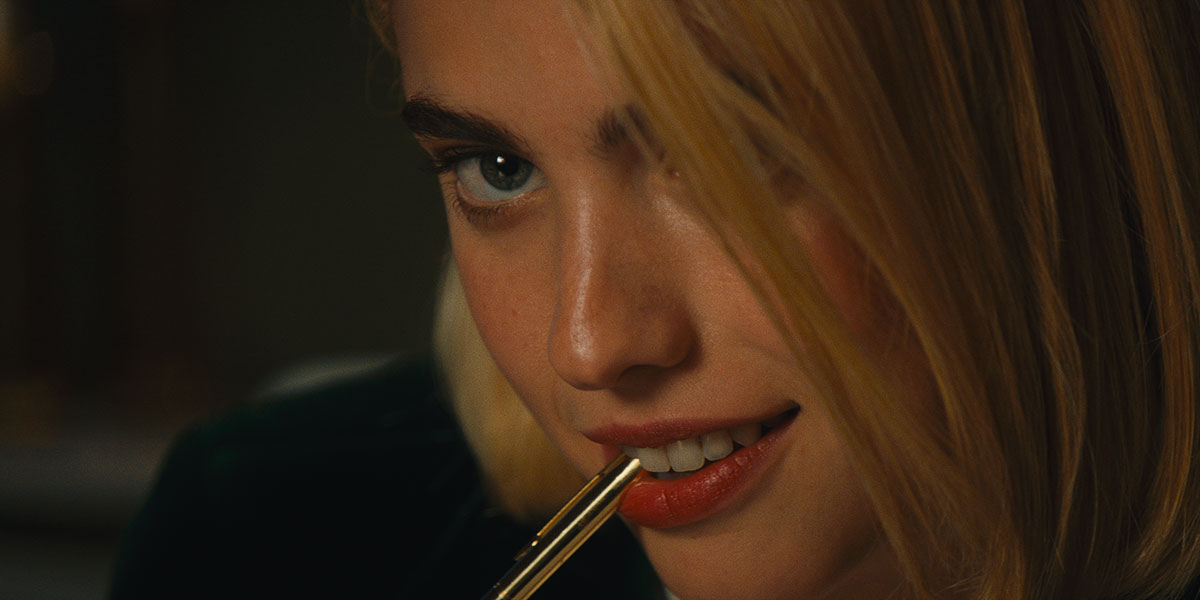 How well do you know your regular sex worker? How well do they know you? What Hal (Christopher Abbott) and Rebecca (Margaret Qualley) share may have begun as a source of fun, but it’s obviously evolved into something much deeper. It’s now akin to therapy and they both know it to be true. The problem, however, lies in how they interpret what these sessions actually provide. Does Hal need Rebecca to come and validate his fetishized insecurities so he can achieve orgasmic release? Or does she do it to empower him with the necessary confidence to lead a company that’s suddenly fallen to him upon the death of his domineering father? Can either of them really know for sure? Not with money involved. Honesty demands higher stakes.

That’s what screenwriter Micah Bloomberg and director Zachary Wigon supply these characters in Sanctuary. They’ve thrust them into the one situation neither can truly control: the dissolution of their relationship. Hal believes he has that power. That he can simply not schedule another appointment and this thing they’ve created over the years will simply cease to exist. Except, of course, that money is where his reach ends. The moment Rebecca enters his hotel room, she takes over. That’s the point of their encounters. She dominates. He submits. So what would it mean to suddenly flip those labels? And if no one uses the safe word, has the session truly ended? I guess we’re about to find out how much the fantasy bleeds into their reality.

Things unfold in a series of vignettes that can either devolve into heated argument or ascend towards mutual respect. Sometimes the former is the goal. Sometimes the latter. We can’t know which until the role-playing ceases; even then, we can never truly know if it’s begun again. Because this dynamic is undefined when we weren’t there at the start. We don’t know what it is Hal wanted when he first hired her nor just how much work Rebecca put into him so that he could even think himself worthy of taking over a publicly traded company. So when things seem to have gone off-the-rails, don’t be so sure. That diversion might be part of Hal’s latest script—unleashing Rebecca’s fiery intensity turns him on.

As soon as she throws the script to the ground, however, we become blind to anything we can’t see with our own eyes. And the pain is palpable: Hal’s sorrow upon relaying the fact that his need to grow up and take greater responsibility means being unable to maintain his proclivities and Rebecca feeling betrayed considering he could so callously toss her aside just when everything she’s done for him is paying off. While both of those things are obviously real, we can’t know if what follows is; Hal isn’t supposed to be so forthright. If he dares to pretend, shouldn’t Rebecca test his resolve to ensure he isn’t just lying to himself? The signs are there that that’s all this is. One more delusional farce.

The emotions inside Hal’s hotel room ultimately escalate beyond either of their control. If, as he says, he’d be nothing without their work together, shouldn’t Rebecca get a cut of his exorbitant salary? And if, as he also says, her role in his life was nothing more than pleasure, shouldn’t he be able to prove himself as cutthroat as he postures? So commences a game of chicken: meet Rebecca’s financial demands or kill her. That’s the choice she presents by admitting to or lying about a hidden camera she installed to film their little no-touching S&M escapades. Put up or shut up, as it were. Be the violent monster his father was or the pathetic nobody his father could barely tolerate. Know when to stop or don’t at all.

The result is equally intense and absurd. She gets him so worked up that he alternates between aggressively tearing the room apart and helplessly screaming “why are you doing this to me?!” He’s so unhinged that she cannot just comply by walking away as his inferior. It doesn’t matter that she’s a nobody by comparison to the outside world. This world counts and here she’s God. She would probably let him kill her to prove her point. She’d smile, too—a twinkle in her eye praising him as though a grade-schooler on moving-up day. Would he do it, though? Maybe. She wins either way; staying alive means he agrees that he’s still that scared little boy inside. Agreeing means he does owe her millions.

Just when we think we have a handle on where things are going, though, Bloomberg and Wigon take another left turn. Love, destruction, sex, and assault are all on the table. These are two feral creatures caught between widely divergent identities inside this room and out—each projecting dominance to see if the other blinks. And it’s not wrong to laugh. This whole ordeal is funny, if for no other reason than the fact that these two will not let go. It’s tantrum after tantrum, wry smiles and loaded provocations. Sometimes Rebecca gives him permission to have what he wants whether it’s masturbating to completion or cancelling her employment. Sometimes Hal’s inherent insecurities and mistrust force him to demand assurances and push her to rescind that hard-won approval.

Around they go leaving broken glass, tears, and pent-up frustrations on the floor. Things get real and then reality shifts. Malicious intent leads to injury and civility implausibly fills the void. Who’s lying? Who’s cheating? Who’s having too much fun to stop? How far will they go? We watch because it honestly feels like the filmmakers didn’t know themselves until it was written. They simply dialed Hal and Rebecca to eleven and let them loose on each other in the most combative states their characters could feasibly reach. Abbott and Qualley unload everything from physical to emotional to psychological abuse, both roles desperate to solidify their respective superiority and restore the status quo. Rediscover balance by admitting their desires. Who knows? They might just fulfill them too.