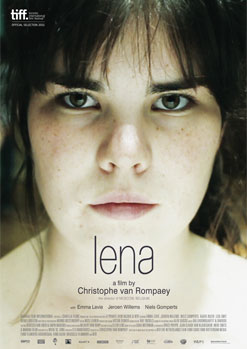 A normal life was never an option for Lena. Whether a translation tick or a telling line throughout the film, the words “Be normal” crop up often as none of the characters traveling in and out of this young girl’s life come close to the definition. Raised by a prostitute mother constantly belittles her for being fat when not on the phone yelling in Polish about her dying, pimp father, Lena has nothing to her name but pain and suffering. Between the ridicule at home and the snickering looks from kids her age outside, the only reprieve she’s allowed is a Thursday night line-dancing class with best friend Hanneke … and sex. But as the opening sequence shows us in what’s eventually proven to be over-used slow motion, this physical act holds no passion or desire. Like her tempestuous guardian, sex serves only to drowning her in the dull, painful white noise of life. A pariah imprisoned within herself, at the mercy of the whole world, Lena never stood a chance.

With sentiments that usually ring false, oftentimes doubling for, “she takes her clothes off”, Emma Levie’s performance at the film’s center is nothing short of brave. This bravery doesn’t come from the fearlessness of stripping naked, but instead a stirring depiction of humanity’s last gasp before extinguishing forever. A dead look of boredom plastered to her face as she shakes quietly back and forth—the pants and moans coming from her sex partners alone—Lena still hopes one of these days the boy exploiting her ‘generosity’ will look into her eyes and feel a connection. She wallows through the nameless men in hopes of finally experiencing how love feels, ending the cycle of abandonment that runs deep within her blood. No matter how hard she tries to bury it behind her Dutch exterior, though, her family’s history of Polish street trash rises to the surface. With each boy’s sudden departure, many without even bothering to learn a name, Lena’s blank stare of sorrow admits the inevitable transformation into her mother.

Screenwriter Mieke de Jong doesn’t stop there, deciding to pile on more strife. Saddling this girl with a thankless day care internship, giving her a selfish friend with the gall to laugh derisively when told Lena spent the night with a boy, and fitting her with self-esteem issues that would keep her at home in solitude if not for the tiny Polish flag designating a ‘John’ was inside, hope for better isn’t something she can fathom. But that’s all before Daan (Niels Gomperts) stumbles into her life at a brisk pace equaled by her moped. Seeing her as a getaway from the flashing lights we spy in the background, this boy hitches a ride to safety and does the unthinkable when dropped off—he asks Lena for her number. Even she doesn’t know what to do, the thought it’s all a joke nestling comfortably at the back of her mind, but the instant sharing of his number back with the ring of her phone proves their rendezvous may have been fate extending an olive branch of happiness.

If that were the truth, Christophe van Rompaey’s sophomore feature screening at the Toronto International Film Festival wouldn’t be nearly as powerful or as unnerving. Existing in the limbo between good and bad, there is a lot to like within the whole that its claustrophobic discomfort never allows to truly soar. But that may be the point—to stir up feelings to make you think, turn away, or shudder at the depths of emotional hell these characters experience. We want a happy ending for Lena and Daan, but our own conditioned preconceptions of an overweight teen refuse to let us believe. Sadly—and to Van Rompaey and de Jong’s credit—we expose ourselves to our own cruelty as we watch this girl finally snag a boyfriend unafraid to be seen with her in public, knowing it’s only a matter of time before the bottom drops. I didn’t expect how far they would fall, though, suspended in the dark abyss of amorality and the absence of compassion with anger so readily available. Lena does bring it upon herself. Hers is a tough life to run from, the people who hurt the most almost always ending up the ones who love her. Daan is the exception—the true anomaly, far from perfect but completely smitten. They meet as he’s running from the police, so we know from the start he isn’t the most upstanding citizen, yet the way he treats her is gentle and without a shred of dishonesty. He takes her in after seeing the volatile relationship with her mother, letting her live with him and his father Tom (Jeroen Willems), a shell of a man without feeling who has let his son call the shots after the death of his wife. It’s a familial bond in direct contrast to Lena’s, but one just as warped and abusive if not as overtly so. Both are kind men—a breed of person she hasn’t met before—welcoming her in despite their secretive lives. She helps make them better men too, but her desire for love forces her to do whatever it takes to retain it.

Her sexuality goes from exploitative escape to empowerment to complete devastation. And with front row seats, we see the chaotic whirlwind of Levie’s performance up close. Dripping with authenticity, this girl is on an emotional rollercoaster: screaming with her only family, Agata Buzek’s Danka heartbreaking in its duality of skanky nighttime escort and cleaned up daytime bus driver; knowing she’s being used by her best friend, Lisa Smit’s Hanneke as loathsome a compassionless teen as one can be; and trapped inside a love triangle spanning levels of father/daughter, boyfriend/girlfriend, and rapist/victim. As such, her brilliance makes the film almost unbearable. Watching the descent into irredeemable darkness, all I could think of was the tragedy of this girl’s life as the only chance she had for normalcy touches upon the deep-seeded waking nightmares of her own oblivion. Dance can’t even give the calm respite it used to in its metronomic count. The numbers are now just a ticking time bomb ready to blow with Lena powerless to diffuse.

Lena plays at the Toronto International Film Festival on September 12, 13, & 17.