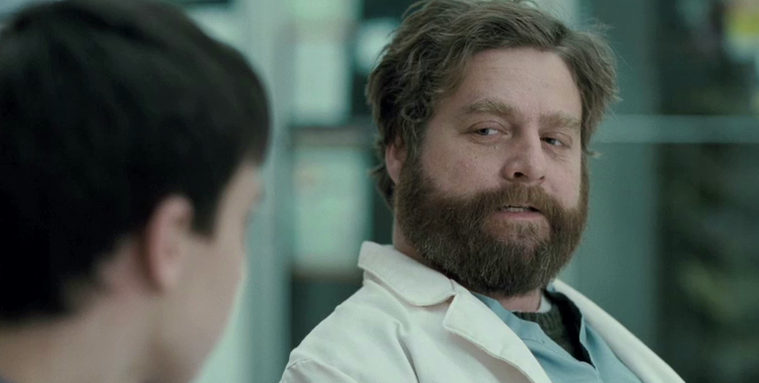 [TIFF Review] It's Kind of a Funny Story

I adore Anna Boden and Ryan Fleck‘s first two features, Half-Nelson and Sugar, but I knew It’s Kind of a Funny Story would be different going in. There was comedy to be found in their previous acute baseball character study, but here they inject much more while still balancing the drama to a various extent.

The coming-of-age dramedy is based on Ned Vizzeni‘s novel, telling the 5-day story of a depressed, confused 16-year-old Craig (Keir Gilchrist) who admits himself into a psych ward for immediate treatment after thoughts of suicide. While at the stay he meets a variety of patients, each teaching him a little something about his situation.

With flashy animations and extravagant dream sequences that delve into the thoughts of Craig, one can tell off-the-bat this is new territory for Boden/Fleck. While not all of it works, the film succeeds in two specific relationships related to Gilchrist, who gives a fine performance as our damaged teen.

Zach Galifianakis is Bobby, a patient with a dark history. He provides the comedic moments as expected, but goes to a much deeper level that I never thought was possible for the actor. His mentor relationship with our lead Craig makes for the most dynamic of the film.

Gilchrist also comes across Noelle, another distressed teen played by the beautiful Emma Roberts. Their chemistry feels the most natural in the film, resulting in a satisfying, albeit predictable arc.

Galifianakis and Roberts are the only supporting actors given more than just a punchline. Gilchrist encounters an array of patients at the hospital from Jeremy Davies to Adrian Martinez, but they are used for strictly laughs or one-note quips. Their bit parts work towards the big picture, but I wish they were a little more fleshed out.

With their previous feature, Sugar, taking such a bold and unpredictable last act turn, this story stays mostly standard throughout. The previously mentioned dream sequences give a little variety, resulting in sprawling animations and glam edition of Under Pressure. At first jarring, these additions eventually weave their way into the story.

Boden and Fleck also handle the mounting pressure of being a teen in this era to favorable results. The idea that after a certain age, the once enjoyable freedom is gone and everything seems to pile on at once definitely hits home. These themes and others like it throughout the film may not connect with those that have long since passed this adolescent phase, but it should speak to others close to Craig’s situation.

The mainstream, commercial flavor found in this duo’s new direction may be too blatant for some to look past, but there is still enough comedy to entertain. The dramatic moments that work are also a welcome reminder that Boden and Fleck haven’t lost their way. While not as audacious as their previous work,  this conventional youth tale has just enough to appease.