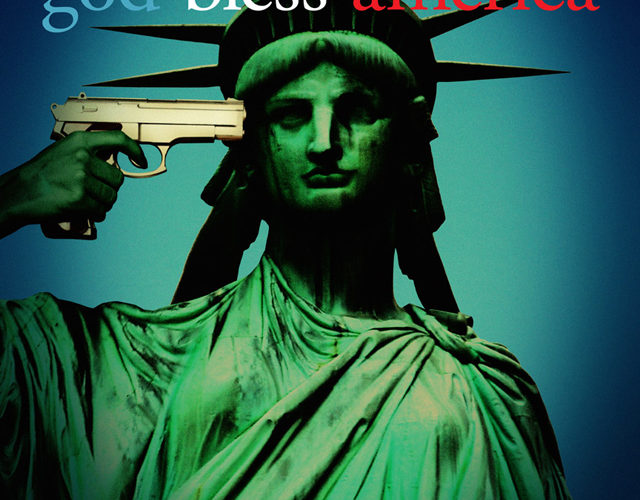 In the age of American Idol, My Super Sweet Sixteen and the Jersey Shore, Natural Born Killers, Oliver Stone’s 1994 film looks quaint. Fred (Joel Murray), the anti-hero of God Bless America lies awake nights watching TV, including a sweet sixteen show featuring a privileged white girl upset her present was a Lexus. To quote Bill Maher, if “a 5-star hotel isn’t good enough, its time to bring back the guillotine.” I have faith not all of America is like the Jersey Shore, a self-obsessed self-contained group, but we do (at least during Midnight Madness at TIFF) cheer on Fred as his violent fantasies lead to a killing spree against “mean people.”.This is perhaps the Coffee Party approach, which seem to stand for nothing other than civility. The Tea Party however stand for all sorts things I can’t understand – true to their principals they should go tell flood victims in the North East the Free Market will solve their problems.

It’s this type of political thinking, quoted seemingly directly from Glenn Beck and Bill O’Reilly that drowns out civility (along with a Bad Girls Club-style TV show where one women throws a used tampon at another). Idiocracy may be on the horizon sooner than Mike Judge scheduled it. God Bless America exists in the same vain, if not of the here and now – I’d say it’s a warning, but above all it is a very funny midnight movie. Truth be told, it should be seen at midnight, as I’m not sure if it’d play as well at a near-empty 3PM matinee.

Fred is a 40-year old man who is fired by HR for sending flowers to a female coworker who was having a bad day. He finds out he has a brain tumor from a doctor who is more concerned about his next luxury car than delivering the news, and he can’t get any rest because his self-obsessed douche-bag neighbors have a baby that constantly cries. The plight of a white middle aged divorcée: oh, and his 8-year old daughter is pissed she her mom bought her a Blackberry instead of an iPhone. This leaves Fred with one option: killing spree. He starts first with the star of a My Super Sweet 16-like show – personally I’d rather see her all the sudden become poor and have to live in an East Buffalo crack-house than get shot in the head, but this is a film for Midnight Madness, not one of TIFF’s more “prestigious” programs. Fred hooks up with a teenage girl (Tara Lynne Barr) who admires his actions and together they travel cross country taking out talkers/texters at the movies, eventually leading them to “American Superstarz” – and a Will Hung-inspired guy they assume is mentally disabled, and they believe they have to save from the mean spirited judges and Americans claiming for more.

The film works as a satire of the here and now. I fear the day when this will all seem quaint, but it’s a wake-up call and bound to be offensive. But then again if you’re the type of person that is offended, you’re probably the type of person comedian writer/director Bobcat Goldthwait is targeting. God Bless America is a post-9/11 wake up call, seemingly fit during the rampant 9/11 nationalism that is dominant now. The problem is not so much with nationalism (a case is made as a douche-bag puts a 9/11- Never Forget sticker on his car just because its popular – remember those ribbons?), but with exceptionalism. Our politicians have to spew American exceptionalism, but when it penetrates the personal level and you believe you’re exceptional, just because. Fans of Snookie’s book A Shore Thing, should probably consider attending a different movie.