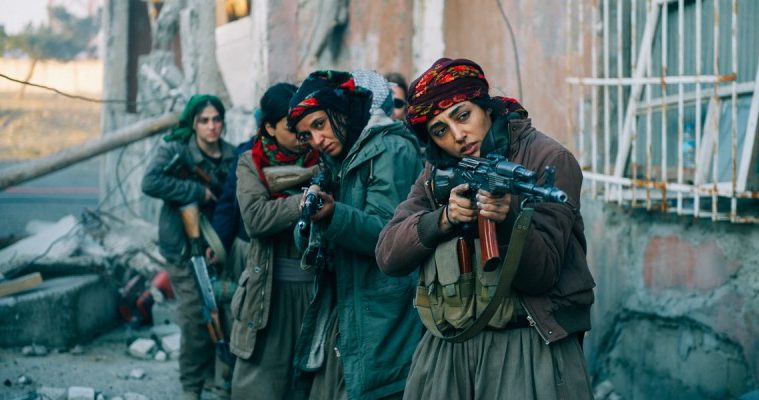 TIFF Review: ‘Girls of the Sun’ is an Oppressively Harrowing War Drama

It’s just like America to document ISIS as a fight we must combat—like the saviors we are. There’s a reason for this from our perspective, but our jingoistic thought process does detract from what’s occurring on the ground. People are engaged in a war that they have no way to avoid. They’ve been displaced from their homes by a terrorist regime that has murdered them, raped them, and indoctrinated their youth into joining the cause. So our hero complex has devastating effects insofar as it erases the victims in a bid to shroud areas like Kurdistan in a blanket of evil. It unwittingly turns Muslims into the enemy as a whole without approaching the nuance of this dynamic at work (and token guides for us to save don’t count). That’s why a film like Eva Husson’s Girls of the Sun is important.

The story follows a French journalist named Mathilde (Emmanuelle Bercot) as she seeks the story of Kurd resistance at the front lines. She’s haunted by her own fresh tragedy—one that leaves her avoiding phone calls from home reminding her of loss and responsibility—so this war becomes the best distraction. And it isn’t long before she finds the perfect subject for her story in Bahar’s (Golshifteh Farahani) determined, confident soldier. Like the women she fights beside, Bahar is a former captive who watched as her husband and son were taken away before being sold as a sex slave. We therefore infer why she’d take up arms despite having been a lawyer with no military inclination, but the details of that trajectory will still devastate. Husson is not about sanitizing what goes on.

This is both a strength and weakness of her film. On the one hand we need to see the abuse. We need to see the tenacious courage of women possessed by rage and revenge—soldiers formed specifically because their enemy did what they did. Mathilde’s type of journalism shines a light on topics and viewpoints we would only know through propaganda. She risks her life alongside fighters resigned to tragic fates because she believes her role as a witness is necessary. It’s not enough to just talk about what’s happening either. We need to see it to understand the malice. So while Bahar leads her troop through mined tunnels in search of a victory as symbolically powerful as it is tactically, we enter her nightmarish memories to experience the pain and sorrow behind her eyes. Her evolution from lawyer to warrior is still ultimately driven by justice.

Where things go too far is in how Bahar is the only victim we see for whom these heinous crimes target. Rather than tell a tale about the entire contingent of women, Husson puts her eggs in this one basket. The result is harrowing to the point of oppressive because the constant worsening of her past becomes almost impossible to believe. But that’s the fine line of what’s happening. All these horrors do happen to single individuals. In a place of genocide there’s never an even distribution of terror and, if we’re being honest, every character onscreen might have suffered an identical sequence of tragedies. To see that they aren’t insurmountable is inspiring and Bahar seemingly becomes a real-life Wonder Woman in the process. It’s simply a tough emotional sell because we can’t take a breath, not even to let another character shoulder some of the trauma.

Where this might lose people due to dramatic fatigue, however, there is purpose to it. Husson is very clearly creating a mirror between Bahar and Mathilde whether their sacrifices, families, or personas. It’s a film about motherhood as much as survival and the struggles that carries. It’s about the unsung women too often overshadowed in both occupations as fragile and how they won’t be dismissed. Mathilde won’t be coddled by those who wonder if she’s here on a death wish and Bahar won’t be silenced when her superiors show a lack of force. They are here to do a job no matter the stakes. They’re here to fight back against tyranny and, let’s face it, toxic masculinity. ISIS is not an organization that affords any type of sympathy. They’re monsters to us and even worse to Muslims forced to always answer for their actions, guilty by association.

Bercot is fantastic, breaking ever so slightly when this distraction takes her thoughts back home to that which she’s desperate to escape. It’s a well-written part too in that Husson lets her be heroic in her own way. This isn’t about the French woman putting down her camera and picking up a gun. Mathilde is very much aware of why she’s here and what she’s willing to do and it never diminishes her function. She’s a witness risking everything to get these unreported stories out into the world regardless of whether they’ll be read. We live in a time where truth is forever held in question despite incontrovertible proof. But rather than allow that authentic cynicism to break her, she lets it be a reason to reclaim her agency in a dying profession cannibalized by clicks. This is more than an assignment, it’s a moral imperative.

And that’s of course why Bahar is here too—to defeat those who literally ripped her life away in the night. Maybe who she makes her more sympathetic and opportunistic as far as having avenues at her disposal those poorer don’t, but that shouldn’t lessen her truth. Farahani fits perfectly in both worlds, her transformation from altruistic optimist to hardened pragmatist believably dire in its gradual reveal. Bahar becomes a pillar of hope in captivity and combat, never willing to give up when the alternative is death anyway. She knows her only chance is to become that which these men fear most: their downfall. ISIS seeks paradise and being killed by a woman ruins that chance. So these survivors flip the table. They take up arms to reclaim their homes and teach future generations the errors of man.

While it’s not as stylish as Husson’s Bang Gang, Girls of the Sun is just as assured. There’s a specific political message at its back and it expresses it without compromise for better or worse. That message is also relevant beyond its Kurdistan setting thanks to its integral parts being universal topics like feminism, religious zealotry, and free press. It says it’s okay to fight back. It’s okay to acknowledge the emotional turmoil parenthood stirs when you barely have enough energy to cope with loss on your own let alone walk a child through theirs. Life is messy and it’s ungodly cruel, but we can survive. We can use tragedy not as an excuse to give up, but as a reason go further. Clichéd or not, sometimes our greatest superheroes are the ones in the newspapers—black and white rather than color.

Girls of the Sun screened at the Toronto International Film Festival.