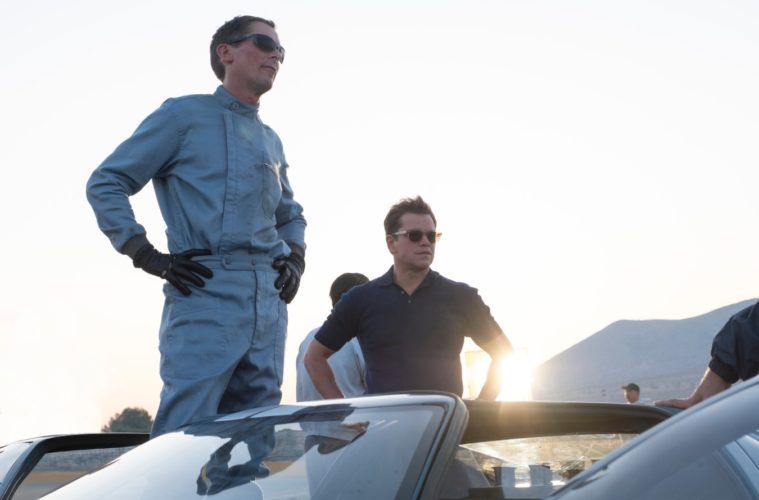 James Mangold’s Ford v Ferrari is, in a word, sturdy. It’s the kind of airtight drama that could never be called groundbreaking or even original. But it offers ample pleasures in performance—from stars Matt Damon and Christian Bale—and design. While it could be a bit nastier, this is unquestionably intense grade-A Hollywood entertainment. The racing sequences are genuinely thrilling, and even the boardroom and back-office battles are compelling.

While the story itself—the Ford Motor Company hires auto racing legend Carroll Shelby (Damon) and brash driver Ken Miles (Bale) in an attempt at taking down Ferrari’s dominance at the legendary Le Mans—will be new to some audiences, the structure is undoubtedly familiar. That is an issue, especially at 152 minutes. But Mangold and screenwriters Jez Butterworth, John-Henry Butterworth, and Jason Keller keep this baby humming–there’s little time to ponder structural issues when we’re moving too quickly to care.

This sense of storytelling efficiency is present from scene one, in which we watch Damon’s Shelby win the grueling, 24-hour Le Mans in France. Soon, however, health issues left the driver unable to race, and he moved into auto sales and a behind-the-scenes racing role. Beyond one shot of a messy trailer, we learn next to nothing about Shelby’s personal life, yet the film spends plenty of time on that of Ken Miles, a Brit racer struggling to keep his repair shop afloat. While the audience gets to know Miles’s wife (Outlander star Catriona Balfe, who gives a fine performance) and son, and hear of his wartime heroics, Ford v Ferrari is not very interested in its characters’ pasts.

It instead immerses us into the crucial collision of these people in the 1960s. The legendary Ford Motor Company, led by the literally and figuratively heavy Henry Ford II (a scene-stealing Tracy Letts) was in dire straits. Executive Lee Iacocca (Jon Bernthal) developed a plan to make Ford appealing to younger drivers, and it hinged on gobbling up the sexy but struggling Italian kingpin Enzo Ferrari. He rebuffed the offer, setting into motion a new plan: strike back by winning Le Mans.

The brilliant, passionate Shelby was an essential hire, but just as important was the driver. It is clear from his first onscreen appearance that Miles is an uncontrollable hothead, but a hothead who can drive, making him the subject of frequent battles between Shelby and an ever-annoyed Ford executive (Josh Lucas). As the design and testing process and eventual early races make clear, there is no driver better suited for the arduous task. It all culminates in La Mans, and this lengthy sequence is pumping with adrenaline. It features some of the best work of director Mangold’s career.

It is interesting to note that Michael Mann was originally set to direct a film with Bale as Enzo Ferrari. That project never came to fruition, and now Mann is listed as a producer, and Bale plays a different role. It is rather intoxicating to wonder what the Collateral director would have done with racing sequences like those found in Ford v Ferrari. Yet Mangold’s work should not be taken for granted. He will never be confused with Mann’s visceral touch, but the Walk the Line, 3:10 to Yuma, and Logan director’s track record is remarkably consistent–a feat that continues here.

The director brings a dependable mix of strong characters in physically intense situations, aided by splendid cinematography (by Phedon Papamichael), full-throttle editing (by Michael McCusker and Andrew Buckland), and especially Marco Beltrami’s stirring score. Bale has the showier role here, as a man seemingly on the verge of eruption at all times. (Ford v Ferrari is the rare film in which his actual voice appears.) Surprisingly, though, it is Damon who stands out. He’s the rock of this story, the figure who must navigate a minefield of relationships and keep the ultimate goal top of mind.

Ford v Ferrari is an easy film to scoff at; there is nothing new here, and there is no debating that fact. Instead, we have a compelling story told in simple, intelligent fashion. It deserves a spot on the list of great racing dramas, and the list of the year’s most entertaining dramas.