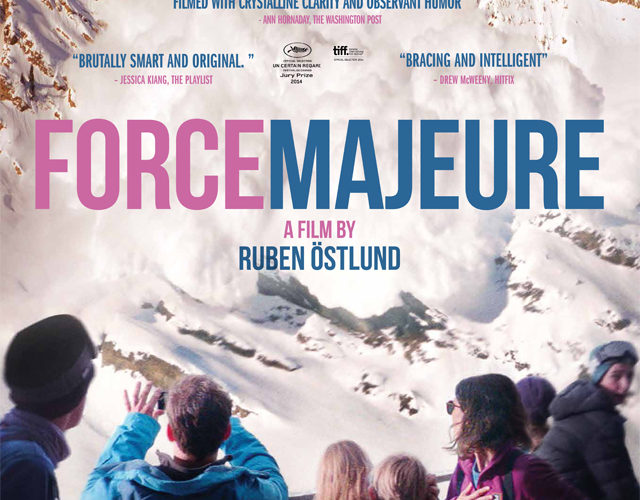 Near the very beginning of Ruben Östlund‘s Force Majeure, we come to understand the impetus for a family’s vacation when the wife, Ebba (Lisa Loven Kongsli), explains that the husband and father, Tomas (Johannes Bah Kuhnke), has been working too much lately to spend time with her and their two young children, Harry (Vincent Wettergren) and Vera (Clara Wettergren). Of course, that they’re at what seems like the nicest French-Alps resort known to man means one can make any number of assumptions about whatever Tomas does that could provide such a lush bourgeois lifestyle, which is likely why it’s never actually revealed. So while a detail like this can essentially seem trivial to some degree, it points to the film’s potential to be purposely vague, which it gladly avoids. Because, after all, is the film’s central conflict Ebba dealing with Tomas abandoning his family during the false threat of an avalanche — this abandonment the result of an individualistic urge formed by his dominant workaday life — or, rather, the titular “force majeure” that is purposed by one character to exist in us all?

While Force Majeure has drawn easy comparisons to Julia Loktev’s The Loneliest Planet — given their somewhat similar couples-torn-apart-by-life-or-death-situation concepts, as well as rigid festival-film formalism — Östlund actually seems more willing to explore his characters. Instead of coming off a mid-film stunt, the inciting incident is upfront in his first act, letting both a moral drama and a comedy of errors ensue as a marriage crumbles. This all points to a tricky balancing act, obviously, and Östlund comes close to mocking his characters a little too much with a number of cheeky classical music cues and each chapter’s concluding night-time shots of the resort’s exterior, all of which are quick and gleeful to establish the family drama’s insignificance within this insidiously punishing locale. Moreso, their children’s attachment to technology establishes the resort as an uneasy interaction between the tenets of modernization and nature — think of it as an updated version of Antonioni’s Red Desert, even. Yet the drama never leaves Östlund’s grasp, and rightly there’s a completely even balance in runtime between Tomas and Ebba’s respective dilemmas, even to unsubtle degrees: a variety of supporting characters egg on what they perceive as dangerous tendencies within their concepts of gender relations.

But late in the film, by the time Tomas tries to defend himself through the disingenuous statement that he, like his own family, is “a victim” of his own flaws, it’s quite clear who’s ultimately at fault. The film’s conclusion — which deceptively comes off as a humane happy ending, but rather leaves Tomas reveling in his own self-delusion regarding redemption – hangs Force Majeure at the right mid-point: the hint of a possibly cyclical series of events, yet at least a brief departure from the comfortable stasis that so fed his cowardice.

Force Majeure screened at TIFF and will open in November. See our complete coverage below and the trailer above.