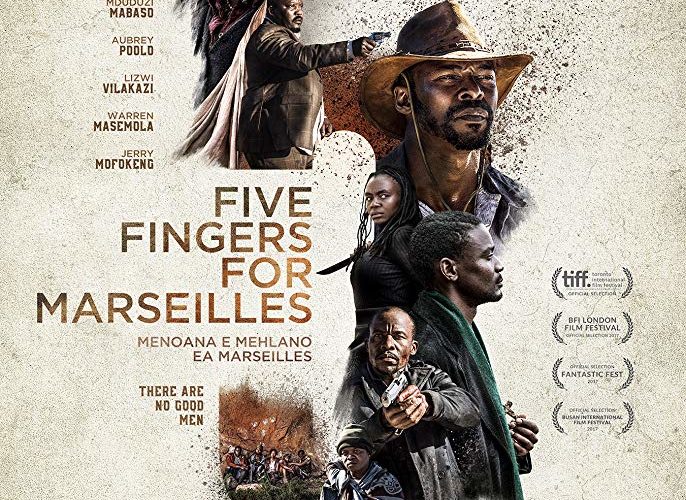 Director Michael Matthews and writer Sean Drummond were drawn to the landscapes of South Africa’s Eastern Cape while traveling their homeland, especially the echoes of classic cinematic western environments. Learning about how its current towns arose — from the ashes of Apartheid-era cities mimicking European capitals by name — only cemented the comparison, each a product of the locals taking control once their oppressors left after their government changed hands and the train lines shutdown. This new frontier became the pair’s setting, their story gelling after seven years of research and development to do right by the inhabitants’ history and struggles. Sprinkle in a bit of legend and lore to create an antihero hidden beneath rage and Five Fingers for Marseilles was born. The title describes a quintet of childhood friends caught within Apartheid’s grip. Too young to feel the effects as greatly as their defeated parents, they’re old enough to understand what it took to instill change. But while Zulu (their unofficial leader) knew fighting the corrupt police force with more than sticks and rocks would only make things worse, his brother Tau readied for war. And with Bongani, Unathi, and Luyanda caught in the middle of this tug-of-war between mind and heart, a tragic incident occurs to ensure there’s no turning back. Afraid of the ramifications his actions personally wrought, Tau flees — leaving his “brothers” (and love Lerato) to endure the fallout. Nobody would be the same afterwards, a truth Tau (Vuyo Dabula) only learns twenty years later.

We meet his adult self as he’s being released from jail alongside partners in violence Congo (Anthony Oseyemi) and Slim Sixteen (Brendon Daniels). Haunted by the demons of who he has been since that first kill, Tau decides to leave his gun behind and return to what he hopes is a peaceful retirement in a land he knows: Railway, the hill-top community formed for the natives once Afrikaners took the land below and named it Marseilles. When he arrives, however, things don’t seem that different except for the color of his peoples’ persecutors. Where the white policemen once ruled with iron-fists and extortion now exists a gang of black men known as the Night Runners, their leader “The Ghost” (Hamilton Dhlamini). What’s worse is how they’ve taken power. It’s time now for Tau to recognize those who see him as a stranger. Lerato (Zethu Dlomo) works at her father’s (Jerry Mofokeng’s Jonah) bar The Grey Lady; Unathi (Aubrey Poolo) has taken his nickname “Pastor” to heart by becoming a man of the cloth; Bongani (Kenneth Nkosi) has anointed himself savior as mayor of Marseilles’ remnants presently rechristened as New Marseilles; and Luyanda is Railway’s police chief, keeping shopkeepers such as “China” (Kenneth Fok) under thumb just like his white predecessors did. Each is in this role as a direct result of Tau leaving them behind. How they combated what followed led them to loyalty, altruism, prosperity, and corruption respectively. And as Tau threw a wrench in the antagonistic but peaceful “equilibrium” before, he does so again.

Five Fingers for Marseilles becomes the fight that should have been two decades earlier as children, now as adults. As “Ghost” threatens those he loves, Tau must weigh whether or not to let the demon within out once more. The former banks on history repeating itself with the latter running away to leave Railway’s slum (in comparison to Bongani’s utopia) vulnerable. But Matthews and Drummond’s obvious love for the western couldn’t let things end so easily. So they provide their flawed hero the exact motivation necessary to finish what he’s started this time: blood. And with the unlikely help of a drunken salesman (Dean Fourie’s Honest John) and angry teenager in Lizwi Vilakazi’s Sizwe, Tau hopes to unite a new Five Fingers to save the day. The filmmakers really let South Africa look and feel like America’s “Wild West” here. Their characters wear hats and bandanas, bad guys wear black with surly attitudes and guns at hips (Warren Masemola epitomizes the remorseless heavy quick to conjure a yet unseen superior’s infamous reputation before finally getting his own hands dirty), and the relative connection between a town going under while a city rises is hardly coincidental. Dabula does his best Clint Eastwood to fit right in, his Tau proving formidable despite his calm demeanor when confronted by murderers. Maybe Matthews and Drummond rely on genre cliché a bit too much to have their film stand apart rather than with as an effective retread in fresh contextual surroundings, but their goal is met nonetheless.

Everything you want from a western thematically is present with arch stereotypes of good and evil prevalent but never detrimental to the characters. Dhlamini goes as far over-the-top as Dabula stays reserved, their dynamic as vessels of immense strength converging for a winner take all scenario obvious from the moment they meet. Drama is born from family stubbornness and regret, lost friendships ravaged by the horrors time introduced, and of course redemption. But just as the filmmakers seek to color things with an authentic spin courtesy of local heritage and real emotional (and physical) scars, they refuse to demean the complex psychology of their story by delivering anything but a melancholic ending wherein redemption doesn’t automatically earn salvation. True heroes accept when their own actions cannot be forgiven.

Five Fingers for Marseilles premiered at the Toronto International Film Festival and opens on September 7, 2018.