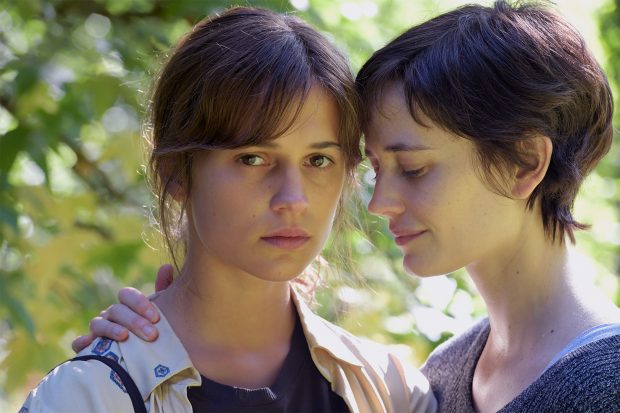 It’s difficult to know what to make of Lisa Langseth’s Euphoria. At times it seems in the cusp of science fiction. But then… it isn’t. At other points it offers some clumsy attempts at social satire, and even dark humor. Yet when this 2017 Toronto International Film Festival world premiere is finally finished, it is clear that the film is no more than a standard drama. And a relatively weak one, at that.

Considering its stars, then, Euphoria must qualify as a disappointment. On paper, the idea of pairing Oscar winner Alicia Vikander and the always-intriguing Eva Green as estranged sisters is delightful. Vikander made her debut in Langseth’s Pure, and also drew raves in the director’s 2013 TIFF selection Hotell. It may not come as a surprise that Vikander fares best here. She, far more so than Green, develops a complex persona. How could audiences not expect more, however?

As Euphoria opens, Vikander’s New York-based artist, Ines, is arriving at the airport for a reunion with her sister, Emilie. As Emilie explains later in the film, this coupling has been delayed for many years. Only know, she believes, that Ines’s art career has taken a turn for the worse, will her sister make the time. For Ines, the point of this visit is shrouded in mystery. Emilie refuses to say exactly where they are headed, only that it’s “the most beautiful place in the world.” And, yes, Ines can get a massage there if she wishes.

If the sisters’ eventual destination is suspicious, so is Emilie herself. She looks gaunt and downright haunted. She seems far too willing to overspend on an epic hotel room and a dinners of lobster and champagne. She refers to selling her flat, which greatly surprises Ines. She leaps at the chance to dance with stranger at dinner. When that experience ends with fierce vomiting, it is clear to Ines (and the viewer) that something dark is happening to Emilie.

Up to this point, Langseth has done a fine job of keeping our attention and explaining very, very little. This is true even after the car transporting Emilie and Ines to their final destination comes to a sudden stop in the woods. Suddenly, several strangely dressed figures emerge, welcoming Emilie and ready to escort the sisters. Is this a cult? Are they descending into Middle Earth? Are we entering Zardoz territory? (Please, can we enter Zardoz territory?)

The answer will underwhelm. Without completely giving away the mystery, our suspicions about Emilie’s health become confirmed, and the location’s role as a kind of gateway to the great beyond is made clear. For Ines, what follows is initial befuddlement, and then horrified disgust over Emilie’s decision to spend what could be her final days at this odd estate deep in the European countryside. And who can blame Ines, really? One of Euphoria’s failings is its assumption that we’ll join Emilie’s anger with her sister over years of neglect. But Ines comes across as the smart one, the sister who left a nest that was decaying and created a new, successful life for herself.

Predictably, Vikander is wonderful, believable, and agreeably upset as Ines. This is another fine performance from the star who is often the best thing in flawed dramas like The Danish Girl and The Light Between Oceans. Green is saddled with the drearier role, the “other sister” who is deeply ill. The Casino Royale star is far more effective when she plays a character in control of the situation. In Euphoria, things are beyond her grasp, and that makes for a less interesting performance. Emilie has good reason to be frazzled, but she becomes downright annoying.

Also annoying are the countless verbal and even physical fights between Ines and Emilie. The more we discover about the sisters’ relationship and the family drama that has haunted their lives, the more they joust. Langseth’s dialogue is simply not strong enough here, and the breakthroughs that occur seem too sleight. Moments that should resonate do not, and scenes meant to feel endearing instead are deflating. Even the final moments between the sisters are poorly handled and weakly framed.

Yet, there is Vikander to keep our interest throughout. And, speaking of Zardoz, that delectably wack bit of 1970s sci-fi nonsense is represented here by one of its costars, the ever-luminescent Charlotte Rampling. Her role at the estate is akin to a planner/helper, and Rampling makes the most of this small role. So, too, does Charles Dance, as a sort of Richard Branson-meets-Tyrion Lannister type. He is a delight as a wealthy but lonely power player mapping out the end of his days. If you’ve always wanted to see Dance boogie in front of a garage rock band, your chance has arrived.

Visually, Langseth does a nice job of giving us the geography of the estate, and crafts a few sadly beautiful shots that are emotionally affecting. The music is ludicrously tense and overwrought, although Langseth makes glorious use of David Bowie’s Rise and Fall of Ziggy Stardust and the Spiders From Mars album closer, “Rock ‘N’ Roll Suicide.” The moment in which Rampling’s helper puts that album on and slowly dances with a weeping Emilie is lovely, and the song’s reapparance at film’s end is its most sonically blissful moment.

Euphoria is undeniably a missed opportunity at creating a drama of frayed sisterhood that feels fresh and unique. The film is also too restrained and unambitious to make a grand statement on mortality. We’re left with Alica Vikander, and that’s something. But it’s not enough to make this a success. It needed to be a bit more unhinged and a lot less dreary. Let’s hope Langseth and Vikander team up again soon on a more enticing project.