TIFF Review: Encounter is a Sci-Fi Thriller with Strong Performances and a Superficial Message 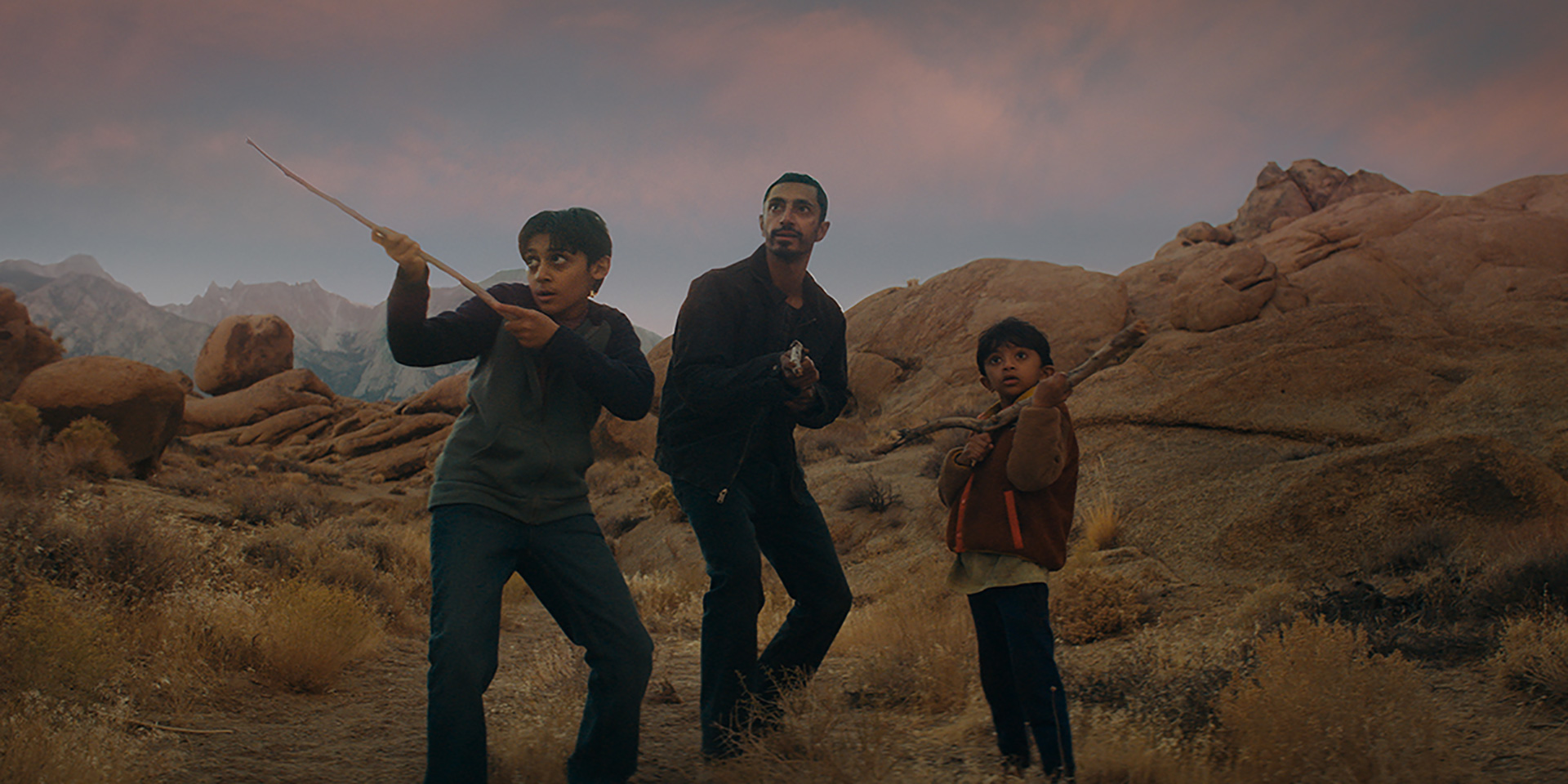 A meteorite falling to Earth disintegrates into stardust that subsequently permeates everything it touches. It hits the soil, enters a bug, is consumed again, and then injected into human flesh by a mosquito while feeding on a microscopic tardigrade about to explode. So the computer-generated prologue to Michael Pearce’s Encounter sets the table for its struggle between man and neurological parasite. Have he and co-writer Joe Barton thus shown that their protagonist has been infected while sleeping? Malik Khan (Riz Ahmed) waking up right after hints at it, but he quickly checks his eyeballs, douses his skin with insect repellent, and wards off bugs wriggling through his motel’s peeling wallpaper anyway. Perhaps his hyper-vigilance saved him this time, but everyone’s luck eventually runs out.

Pearce tries so hard to ensure we know this threat is real that he’s almost daring us to believe it’s not. There’s Malik’s toxic shower, his son Jay (Lucian-River Chauhan) drawing soldiers shooting giant insects like he just watched Starship Troopers, and a letter between them explaining how Dad has been away on a “top-secret” government assignment. Cue the broadcast warnings to stay inside and we can dive head-first into the science fiction conceit, but we’re instead shown a scene with Jay’s mother Piya (Janina Gavankar) telling her son to go outside on his stepfather’s (Misha Collins’ Dylan) tractor with his younger brother Bobby (Aditya Geddada). Then she slaps a bug on her neck after it drew blood. It might be that the parasites have already taken control.

In swoops Malik. He’s breaking protocol to save his boys before it’s too late by pitching them a road trip. After two years apart, they can’t agree fast enough. It’s only when they hit the interstate that they start asking questions and Malik begrudgingly starts providing answers. What reason do they have to disbelieve him? He’s their father. He cares enough to whisk them away, so they give him the benefit of the doubt and agree to follow his rules. A violent encounter with a policeman later leaves them all a bit shaken, but they’re still on the move. If they can get to his Nevada base while avoiding the bugs crawling out every air vent as meteors continue penetrating the planet’s atmosphere, they can hopefully save everyone.

It’s a tense ride that ultimately leads Malik to call his superior. What we assume will be a person in uniform sitting behind a desk, however, is revealed as someone completely different: Octavia Spencer’s Hattie. Suddenly we’re thrown for a loop, wondering what to believe with the film spiraling into Jeff Nichols’ usual territory as a hybridization between Midnight Special‘s adventure and Take Shelter‘s mysterious ambiguity. And it initially works, thanks to Ahmed’s captivatingly intense performance and authentic turns by Geddada (pure child-like excitement and impatience) and Chauhan (skepticism, fear, and hope) by his side. We forget that there’s a potential body-snatching conspiracy completely in lieu of experiencing the increasingly sad interactions of a family torn apart too long. And Dad’s ex-Marine twists tight enough to pop.

I wish Pearce had stayed with this notion by dialing the thriller aspects down to turn the dramatic import up. The trio is fantastic together through good times and bad as tempers flare too fast to avoid needing contrition later. Ahmed and Chauhan are particularly great, the former trying his best to instill courage and confidence in the latter despite him still being too young to truly understand everything that’s going on. This journey has its fair share of violence, Malik constantly keeping his head on a swivel to protect them from parasite victims and law enforcement both. Introducing the fact that the FBI (Rory Cochrane’s Shepherd) are on his tail is enough to start a clock for the big question’s (aliens) reveal.

The wheels had sadly already come off by then. While I didn’t think twice about that aforementioned encounter with the police—it’s plausible, under the circumstances—putting Malik in the path of the white-supremacist militia Three Percenters is pretty hard to swallow. The reason is simple: nothing about Encounter deals with race on any level beyond the superficial (main characters are POC and cops are white) until that point. Malik could have found himself on anyone’s doorstep, so choosing racists seems intentional for a message-based mission despite one never coming to fruition. Pearce and Barton set up this heavy emotional narrative dealing with mental illness, PTSD, and familial love only to undercut it with loud overtures of systemic violence devoid of textual basis.

That everything comes to a head in a way that tugs heartstrings anyway shows just how effective the Khan’s Three Musketeers are. We want them to thrive together and find a way to work through all the trouble brewing; we commend their mutual need to protect each other when things get tough, no matter what (even little Bobby gives Malik the stink-eye when hurting his brother). What we must wade through to get there, though, is all manipulative noise—serious issues cosplayed as convenient plot turns rather than implicit, involuntary concepts that don’t just disappear when the filmmakers think it serves their goals. And don’t even start with Spencer’s role. She’s great and her purpose is sound, but the script uses her without remorse.

It uses everything that way. Characters, parasites, FBI protocols, etc. It even gives Malik a badass Marine action sequence because it needs something fresh for us to look at—despite already saying he was a badass and proving he’d die for his sons. Pearce is building this house of cards higher and higher with excessive bluster meant to distract us from the previous bluster until none of it feels real enough to care about besides the Khans’ ability to save each other. So we don’t care about the characters enough to hope they survive. We simply don’t want the performers to have to portray the guilt of being the reason they don’t. Ahmed and the boys are too good for that, too good for this film.

Encounter played at the Toronto International Film Festival arrives in theaters and Amazon Prime in December.