TIFF Review: Drunken Birds Centers on a Romance That Unfolds with Mystery and Style 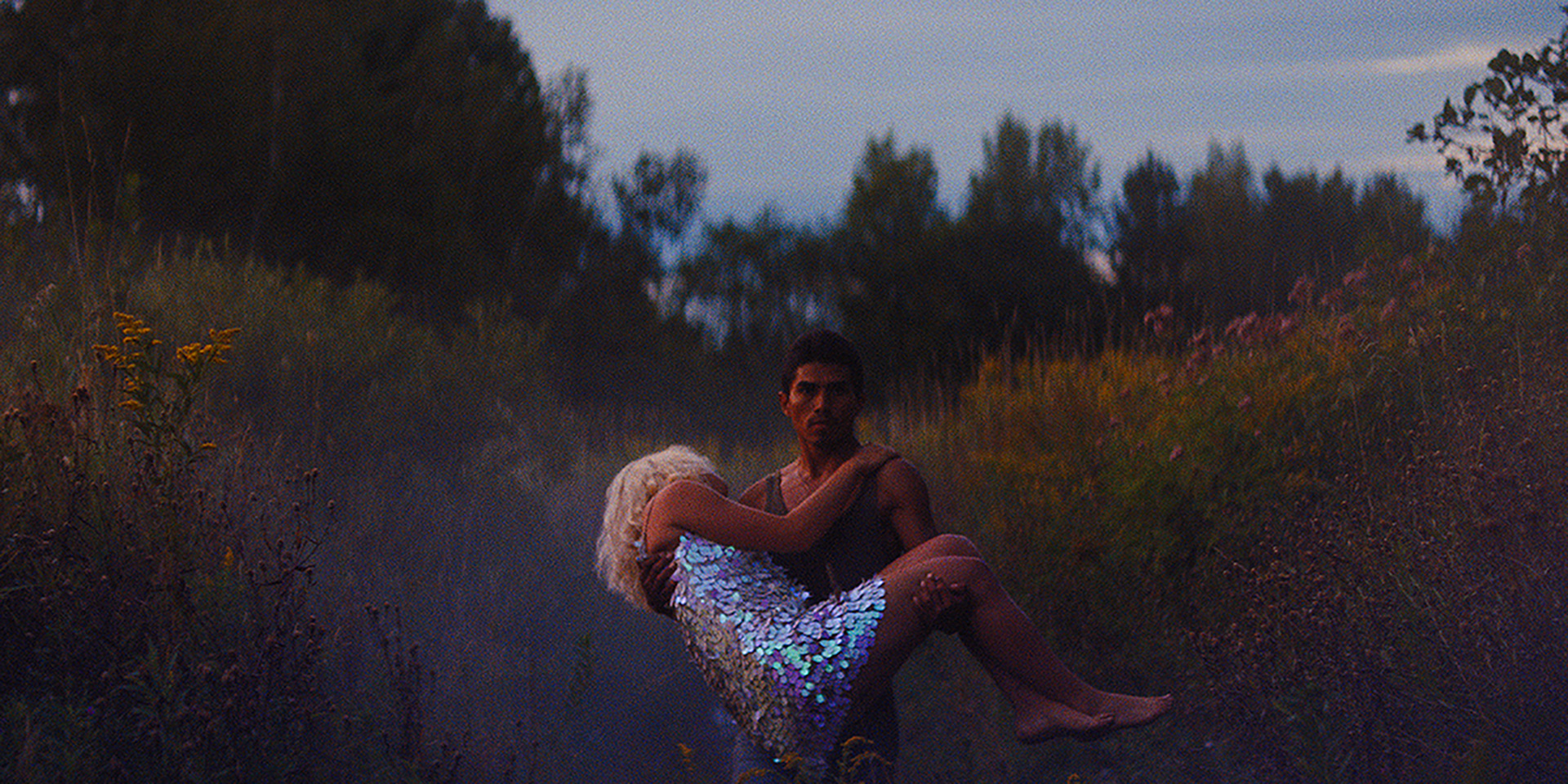 We start at the end—the end of a cartel. Men climb the walls to go inside the now abandoned estate, walking amongst paintings and sculptures before stripping naked to take a dip in the indoor swimming pool while a giant portrait of their unwitting (and now imprisoned) benefactor looks on. One decides to don a fur coat as he rifles through the papers sitting on the kingpin’s desk. He picks up a note and begins to read before discarding it out of boredom. The voice of its author, however, continues to speak. Talk of a shootout, love, and emancipation follow until the smooth swoop of a tarp covering an expensive car transports us back to the moment the letter was composed within. The present provides the past.

Writer/director Ivan Grbovic and co-writer/cinematographer Sara Mishara seamlessly take us back and forth through time so the romance at the center of their Les oiseaux ivres [Drunken Birds] can unfold with mystery and anticipation. After all, the first scene we witness isn’t even in Mexico. We instead enter the apartment of an older woman in Montreal as she misses a call and watches a young man in the street below almost get hit by a car. We don’t know who she is nor the woman exiting the bathroom wondering who was on the phone. And just when it seems answers will appear as someone darkens the peephole on their door, we’re whisked away to a desolate desert road in hot pursuit of a car engulfed by flames.

What an opening sequence of events. The calm serenity of Canada. The violent action of a Mexican cartel clean-up. The humor of inert wealth left behind to be collected by the exploited masses upon which it was built. They’re snapshots for a story we’ve yet to even enter beyond piecing together that the man inside the burning car (who is ultimately spared by his pursuer) is the man that letter’s author loves. He (Jorge Antonio Guerrero’s Willy) is the big man’s driver. She (Yoshira Escárrega’s Marlena) is the big man’s wife. The idea is to leave Mexico separately in hopes no one suspects, vowing to find each other later despite ensuring neither could give up the other’s whereabouts if interrogated. A necklace becomes the only clue.

More than one romance, however, Drunken Birds reveals itself as a tapestry of life’s unfortunate penchant to keep lovers apart. There’s Willy and Marlena. There’s his new boss on a Montreal lettuce farm (Claude Legault’s Richard) who can’t bridge an ever-widening chasm between himself and his wife. There’s the latter (Hélène Florent’s Julie) and her excitement that the latest harvest will potentially bring back the migrant worker with whom she had an affair last summer. And, of course, there’s an old stalwart who’s made this journey north for the past fifteen years to support his family in Mexico. He comforts Willy when the newcomer laments how he’s starting to forget Marlena with each passing day. He tells him that their reunion will inevitably bring it all flooding back.

Grbovic weaves everything in and out of each other as he moves forward, playing with time both through jump cuts and hallucination. One moment sees Julie walking outside into the field to steal a kiss with her lover and the next pans up to show her alone in melancholic revelry rather than in his arms. Another sequence finds her in the greenhouse during a rainstorm, watching as Willy walks on the outside of its walls as a translucent form shifting into that of the man she wishes were there instead. And when that non-linear storytelling lacks a bit of panache, he turns the dial to darken the frame and slow down the pace for an unexpected soundtrack-fuelled interlude that gets us salivating for whatever might come next.

That the answer comes in the form of Richard and Julie’s daughter (Marine Johnson’s Léa) being caught in a teenage rebellious streak that leads her to the big city for a scenario well beyond her imagination may prove extreme, but you cannot deny the impact of its mirrored look at domineering men en route to perhaps setting the stage for everyone to get what they desire. Another chase begins. Another example of exploited men watching their employers grow wealthy from the sidelines. Another act of charity doubling as proof that not everyone can pull the trigger so easily regardless of how much rage has been acquired in the build-up. In the end, everyone on-screen is finding themselves overcome with emotion to reclaim that which they lost.

Does it get melodramatic at times? Sure. Never so much that it feels like the soap opera Willy and his coworkers watch in their downtime, though. It’s more to do with embracing the hyper-stylized potency of love at first sight being just as wonderful in its manifestation as it is chaotic in its execution. Maybe, like an anecdote describes, that love will come at the cost of some unforeseen speedbump. Or perhaps, like with Willy, it arrives in a fashion that ensures death if ever discovered. Grbovic lives and dies by these costs. He makes everything an all or nothing exercise with gunfire, infidelity, posses, and a pimp all too happy to send a message when betrayed. Will the characters balk at the price they’ll have to pay?

One thing’s for sure: Willy won’t. Guerrero is the heart and soul of the film and he’s moving to and from completely different worlds to finally put his arms around the woman he loves. It’s an emotional journey with multiple starts and stops composed by varying degrees of danger. And if it’s not the cartel mowing him down for his transgression, it could very well be Julie (Florent doesn’t get nearly as much screen-time, but she makes the most of it) as her longing for affection—both as a means towards comfort and to ignite a long-since dormant passion from her husband—risks dragging him into the crosshairs. Grbovic ultimately crafts more snapshots to follow Willy to his destination, wrapping us back around to end at the beginning.