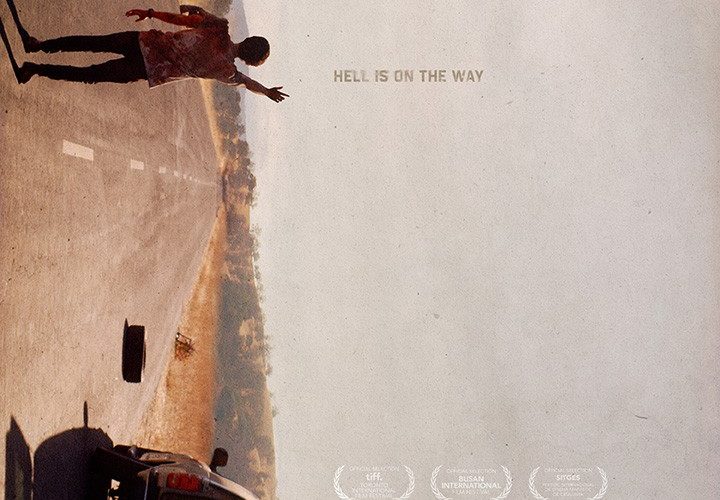 A car slams on its breaks at the pop of a flat. Inside is Todd (Rod Hernandez) and Sara (Alexa Yeames), a young couple toting around a bunch of strangers who pitched in gas money to reach everyone’s shared destination. Putting on the spare this SUV is thankfully equipped with should only take around twenty minutes—or less thanks to a friendly bet for bragging rights. But that would be too simple. The heat gets to Jodi (Kelly Connaire) and Keren (Stephanie Pearson), Eric (Anthony Kirlew) is going to the bathroom off the road, and Todd and Sara sit to rest. So the hard work is left to Jeff (Jason Tobias), a good-natured gent who doesn’t seem to mind until hearing the clink of a fallen rifle slug. Writer/director Ryûhei Kitamura alongside co-writer Joey O’Bryan places us in the open expanse of a deserted road miles from any help and riddled with cell reception dead zones. We become a part of this group that barely knows each other’s names—the perfect fodder for twists and turns as to why they’ve ended up here. We’re forced into a paranoid state similar to their characters, unaware of the situation’s severity or anyone’s motivations. That shell is evidence their tire didn’t merely blow and with the silent release of two more this sextet is whittled down to four. Someone’s toying with them, picking them off one by one at his own personal whims. Is he alone? Does he have an accomplice amongst our victims? What carnage will be delivered?

This is the simple premise behind Downrange, a low-budget suspense horror focusing on the fears, anxieties, and impatience of a few twenty-somethings stuck in a desperate situation. One is caught yards away behind a tree stump and three are hyperventilating on the far side of the car. The hope is that their assailant is happy in his perch, this consistent sense of place an advantage as far as affording them the time to think. Can they move the car without getting shot? Can they find the faintest of signals to call 911? Is running for the tree line worth the certainty that not everyone will survive? They could also wait for another car to come by, but what are the odds they survive his wrath? The minimalist plot is pulled taut so that the tension can keep us on edge despite any obvious shortcomings in production. With some acting that leaves us wanting and the excruciatingly slow reveals of gore to fool us into thinking we experienced impact and not aftermath at the start, Kitamura must use everything at his disposal to lead us into the high stakes arena of predator and prey. Here things look up, his characters ravaged with fear. Emotions and instinct replace the awkward joviality of lust and those artful displays of violence become more brutal and instantaneous. Minds begin racing to conjure solutions as each attempt is met with extreme force. Limbs explode and blood pours as the gunman ensures they stay exactly where he wants them.

What follows is an escalating case of cat and mouse. The survivors look for a way to turn the tables as their would-be murderer boxes them in with well-placed bullets. Hope comes in the form of time whether the setting sun or prospect for another vehicle. But waiting also increases the chance someone makes a mistake or gives up. Another dies and then another. Explosions destroy potential escape routes, a steel hammer is used to cauterize a wound, and anyone popping up from behind their barrier has just as much chance of getting a limb blown off as being ignored. Their antagonist bides his time, letting their actions affect the others until more than one become simultaneously exposed. He likes having a choice. He likes increasing their despair. And that’s exactly what Kitamura does to us. He introduces exposition to make us pity these poor souls as more than mere target practice dummies and makes certain they feel guilt for those who’ve died rather than joy in it not yet being them. The car is filled with specific things to help the runtime continue along without dragging too much and his characters—specifically Keren—have life experiences that allow them to know what their next best course of action is. Sacrifices will be made and rage will morph into futility. The blood never stops flowing thanks to numerous injuries sustained and any help that may stumble into the crosshairs meets the same callous indifference from the man with the gun. Ready yourself for some juicy viscera.

The format keeps things insulated and depending on your investment push you to the brink of patience in a positive (excited) or negative (bored) way. If like me you know Kitamura as director of the underrated Midnight Meat Train, temper your expectations as style and polish are definitely pared down to deliver straightforward malicious intent. Downrange is to the point and devoid of excess so its plot remains captivating. This is why deaths come fast: so we know the stakes are high right from the start. Kitamura and O’Bryan have created a scenario where survival needs a lot of luck and courage, but even then victory is a struggle right down to the last breath. Taking the upper hand won’t be painless, but it might just be rewarding.