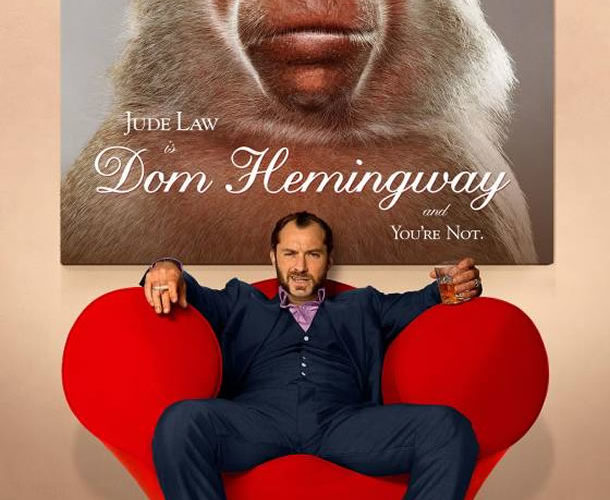 After finding a glut of recent work in television, it’s good to see writer-director Richard Shepard back in theaters with Dom Hemingway. As a big fan of both The Matador and The Hunting Party — despite the somewhat “mainstream” stories to which those films are tethered, their humor is undeniably infectious — to learn that his latest work centered on an extremely short-tempered, alcoholic safecracker just out of prison, all with a vain ego, got me excited. Was he going for broke? Shepherd does that, to a point — every so often to an even greater extent — but while such insanity helps make unique, memorably drawn characters pop off the screen with irreverent hilarity, the story they inhabit needs a bit more depth to captivate beyond the reach of their tomfoolery.

That said, however, Dom is quite the egotistical fool. Played by Jude Law, with obvious pleasure, this British criminal is introduced by a masterfully crude soliloquy regarding his penis: staring directly into the camera at us  –while another inmate satisfies his own member’s needs just below the frame — very quickly do we understand who this guy is. With brimming confidence and self-importance, Law chews the scenery with relish, playing a man who lives by his own rules, minus any fear of consequence. He talks back to the guards, lords over his lunch tablemates in the mess hall, and, of course, earns the type of privacy necessary to get off without an interruption via fear, friendship, or a mix of both. After twelve years locked up, having not learning a thing, he’s ready to hit the streets as though nothing ever changed. But, on the outside, too much has shifted for his lack of personal ambition to withstand. With that in mind, what better way to re-acclimate than a prerequisite beat down of the man who married his wife while in jail? This is Dom in a nutshell: dealing with the anger of truths through the only means he knows. Is he mad at this poor bloke? Sure. The larger story, however, is that he was divorced when arrested. He, therefore, is really pissed at missing his daughter’s (Emilia Clarke) childhood, along with the ability to say goodbye to his ex-wife before she succumbed to cancer. Since her new husband got both, he was always going to be Dom’s first stop. The second? The man he quietly served his time for: boss Ivan Fontaine (Demian Bichir).

This point in the narrative is not only where the craziness takes full control, but the moment when all thoughts of Dom Hemingway‘s plot delving deeper than some inevitable family reunion with his daughter are dispensed. Taking best friend and fellow criminal Dickie (Richard E. Grant) along for the ride, Dom ventures to Fontaine’s French villa to collect the money he’s owed for not turning rat. Being the ornery, entitled mad man he is, however, Dom’s just deserts aren’t enough in the heat of the moment. He wants to lord his superiority over a man who could have him killed with a finger snap — a truth Dickie knows all too well, considering his brilliantly orchestrated facial reactions to Dom’s increasing hostility. It’s merely one of the many fast-paced, profanity-laced diatribes Dom entertains us with before calming down as if nothing at all occurred.

Shepard’s script only gets more random with hedonistic parties, fatal car crashes, oddly omniscient characters setting Dom’s fate, and two comically violent exchanges with a former adversary’s son (Jumayn Hunter) who’s hoping to earn some work. They’re all carefully manipulated events with which Dom can run amok while Dickie looks on in equal parts amusement, boredom, and disbelief — but there aren’t enough mini adventures for the film to become a full-fledged road trip comedy, and still too many for this to be taken as some genuine three-act presentation of an ex-con’s redemption. Instead, Dom Hemingway is simply the showcase for a character that could endure in subsequent stories if Shepard and Law decided he was worth revisiting. I don’t necessarily think anyone involved saw this project as being more than that, though, so it’s by no means a disappointment. I just can’t ignore the potential to go further into the dynamic with Evelyn and her new family, all so Dom can show growth. By the time an attempt to do so is made, all with the sole intention of changing his luck, we’ve already realized he’ll never not be the immature brute we met receiving sexual favors at the outset. No, Dom is a laugh because his temper gets the best of him during insane situations which he, somehow, escapes unscathed. We revel in watching him gruesomely beat someone up before carrying on a nostalgic conversation with those staring on the periphery, and we enjoy his lewd innuendo when cocky sarcasm causes trouble.

But the real coup isn’t the character; it’s Law’s impressive performance bringing him to life. While Bichir and Grant are fantastic supporting players — doing exactly what you’d expect with roles similar to those the two have inhabited before — Law tackles a part at the other polar extreme of what we’re used to him trying. He’s a Cockney prick with mutton chops and a bad attitude who engages in the sort of fun wordplay exchanges Stephen Fry and Hugh Laurie used to write for their old British sketch show when not making the ratings board cringe at a relentless shower of four-lettered words. He’s out of shape, incapable of humility or remorse, wildly unpredictable, and, frankly, one of the most interesting characters at the Toronto International Film Festival this year. He is Dom Hemingway — a one-of-a-kind ****.

Dom Hemingway screened at TIFF and hits theaters on April 1st, 2014. One can see our complete coverage by clicking below.