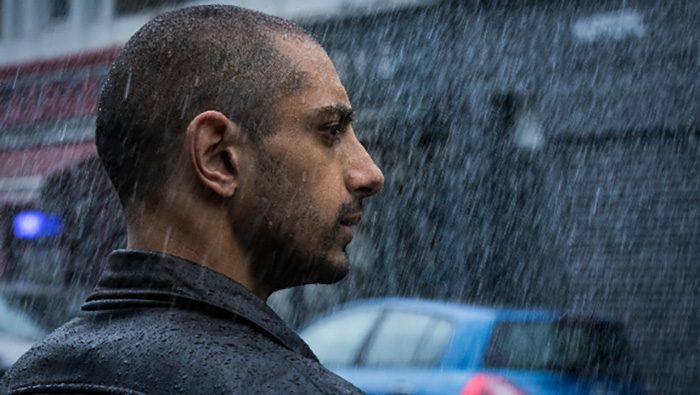 Small-time private detective Tommy Akhtar (Riz Ahmed) has all the swagger of a hard-boiled snoop: leather jacket on his shoulders and cigarette in his mouth, leaning against London architecture in the darkened night. His office resides above some shops, he makes friendly with local convenience store owner Mrs. Elbaz (Myriam Acharki), and asks new clients where they found him because he’s not advertising in the paper. But while he’s good at his work and enjoys the struggle if only to get out of his father’s (Roshan Seth‘s Farzad) house when the old man starts using cricket metaphors to explain life, Tommy has yet to completely run away from his past. It is the “googly ball” of his life, a blind spot that’s never been more apparent until now.

Based on his novel of the same name, screenwriter Patrick Neate‘s City of Tiny Lights plays perfectly as a modern-day film noir with femme fatales, government spooks, and a wisecracking lead unafraid to deliver witty retorts after having his face bashed with a metal pipe. Everything that occurs pretty much arrives through fate, the prostitute knocking on his door opening up a world of pain well beyond the simple missing persons case she pretends it will prove. Melody (Cush Jumbo) just wants to know what happened to her roommate Natasha. She has a list of hotels they use, a photograph, and the knowledge that the girl was with a brand new John. In less than twenty-four hours Tommy discovers her date dead and shortly thereafter the crime scene disappears. It’s also the anniversary of his friend Stuart’s (George Sargeant) death, a day marked by a visit to his gravesite. There’s always a bouquet from their mate Lovely (James Floyd) already, but this year brings a surprise in the form of Shelley (Billie Piper). She was Stuart’s girlfriend back then, leaving after his passing to escape the pain and raise their daughter Emma (Hannah Rae). Now returned with a new job as hostess at a hotel bar, the two look to become reacquainted. This entails reaching back through history to discover what actually happened when they were kids. Their quartet was close-knit and loyal then despite how things ended and the trio that remains has new lives just now being re-connected: the PI, hostess, and real estate magnate.

Neate introduces more players in the form of Mrs. Elbaz’s son Avid (Mohammed Ali Amiri), a street punk who helps Tommy under the guise of being set straight, and Al-Dabaran (Alexander Siddig), the head of an Islam Youth Center with possible ties to Natasha’s disappearance. It’s surprisingly not difficult to begin piecing relationships together, a fact for which the American agent assigned to the case (Vincent Regan) is aware considering he’s locked local detective Donnely (Danny Webb) out. Unfortunately for Tommy, every lead must be corroborated. So he often tips his hand in hopes of watching the fallout to better gauge what’s going on. It’s not too long before the unknown culprit tries tying loose ends off only to have Tommy discover he’s been added to that list. This isn’t a race against time, though, something I count as a positive to allow Tommy the chance to breath and investigate his emotional landscape as well as the case. He’s able to visit Shelley, give Melody status updates, and suss out Lovely’s role in the chaos. He orders his drink of choice—a double Wild Turkey bourbon—and lights his smoke before contemplating the next move with noir rhetoric painting a deliciously over-dramatic picture through narration. And even when it’s obvious to us what’s happening, he remains blinded by the loyalty he’s always shown despite the guilt of knowing those he cared for thought differently. A bright future may finally be in his grasp, but he’ll have to survive this dangerous ordeal to know for sure.

Ahmed shines in the lead role: something this charismatic actor has deserved since the wonderfully funny Four Lions. He embodies the hard-edged street-wise detective well without erasing the sense of empathy his characters always possess. We see the struggle endured between those worlds and know how Shelley’s leaving widened the void in his soul that Stuart’s death tore open. People like him from Mrs. Elbaz to Avid to Donnely (a rarity in films like this where the “real” police often show animosity towards their competition unless his name is Sherlock Holmes) and he has a good head on his shoulders to do right by his city no matter the consequences. He probably bites off more than he can chew this time, but he’s prone to making things personal. Director Pete Travis lends the evening setting a welcomingly mysterious glow amongst its shadows, visually complementing Neate’s plotting to bring us into the action on the ground floor. My only gripe is that Travis seems to love his slow motion street shots that look as though we’re going warp speed in a vat of molasses to provide tension. It’s an odd flourish that becomes annoying both in practice and memory considering it’s so similar to the effect he used in Dredd when the characters took the drug known as “SLO-MO”. But while that on-the-nose label gave the aesthetic context, it has none here. Rather than add to our immersion it becomes distracting from the otherwise minimalistic, tightly woven narrative beneath. Less would surely be more in this instance.

Considering this gripe doesn’t affect the action—it occurs in transitional vignettes between substantial scenes—it’s easy to forgive when the filmmakers draw their human relationships so well. This is the arena where City of Tiny Lights lives or dies. We must believe Tommy’s love for Shelley and Lovely as well as the motivations, fears, and strengths of periphery roles Farzad, Avid, and Melody. Neate isn’t afraid to shroud his violence in anonymity so his hero never knows exactly what’s happening besides the obvious truth he’s getting too close. The more abused he gets the more intense his desire to solve the case sprawling into terrorist warfare and political espionage. In the end it’s about justice for Natasha and perhaps Stuart. It’s time Tommy defeats his personal demons.

City of Tiny Lights is currently playing at the Toronto International Film Festival.