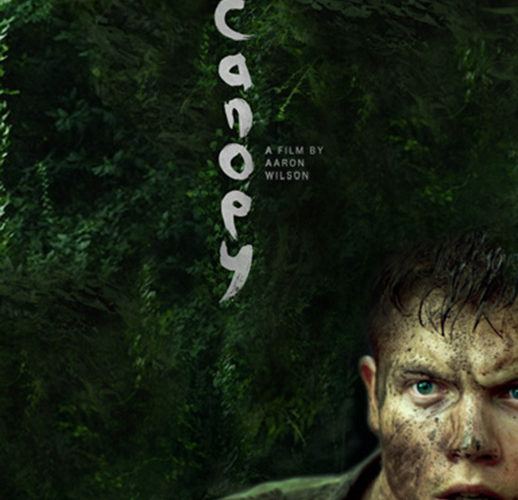 It’s September 9th, 1942 and the Japanese have already invaded Singapore three years before the first atomic bomb will shake them with devastating force and ultimately close out one of the ugliest chapters in Earth’s history. Through an alliance that has held strong even today—this film is a co-production between the two countries—Australia was one of the nations that came to the Southeast Asian island’s assistance in a futile attempt to wrest back control. A British colony at the time of its capture, Singapore retained forces on the ground and in the sky as battles raged on for the final piece to Japan’s Malaysian conquest. Covered in jungle and swarming with troops, survival was hardly a guarantee like with everywhere else caught inside the chaos. Rather than show us another bloody WWII massacre, however, writer/director Aaron Wilson decides to breathe fresh air into the war drama with the virtually non-verbal Canopy. Inspired by first-hand accounts heard from veterans of Australian, Singaporean, and Japanese descent throughout his life, the goal of this feature length debut was to get at the heart of conflict and portray the tiniest sliver of humanity breaking through the wasteland of senseless slaughter. It’s an authentic depiction of what it means to be caught behind enemy lines without a language, sense of direction, or better than slim odds of escaping with life still flowing by the end. It’s about the connections we make and the brief moments of respite to remember what it is the fighting is all about.

Commencing on a pitch-black screen with an aural tapestry of jungle sounds and falling payloads exploding in the distance, we’re enveloped in the soundscape before being allowed to guess where it’s emanating from. Light breaks through and subtly moving trees are lingered upon with the calligraphic characters/text of the title overlaying the deceptive calmness disrupted by the jarring volume of nature explaining how tumultuous life remains behind the stillness of the surface. A swoop of wind flapping against a canvas fabric is heard as the crack of a branch signifies the arrival of Australian pilot Jim (Khan Chittenden) to a disaster area that just seconds ago was miles below. Jostled awake and quick to gain his bearings, the solider hears Japanese voices approaching and thusly escapes with his pack into the woods for shelter. The minutes add up as we watch his trudging through muddy foliage, stopping in silence when hearing sounds of danger and running like hell when close enough to spy the enemy seconds away. It’s on one of these retreats that he sprints headlong into another man with similar ideas in the opposite direction. Poised for a fight, it’s only when the stranger recognizes his foe as a foreigner that he relents and speaks the word, “Chinese”. As good a synonym for “Allie” as Jim needs, the two continue along their aimless walkabout as the Aussie spies his compass and Singaporean relies on a combination of gut feeling and home field advantage. They bond as any men communicating solely in gesture can, hiding from a common evil with no freedom in sight.

It’s this bond between strangers that is so often forgotten as an aspect of war. Jim and Seng (Tzu-yi Mo) are riddled with fear and possessed solely with a heightened sense of hearing that instills an alternating sense of paranoia and comfort in the silence. Birds caw, insects move a steady drone, and the random gunshots and explosions designate areas of to be avoided at all costs. They follow each other as the camera keeps its steady gaze through dense trees, above in a bird’s eye view, or below to catch the shadowy undersides of jets flying through the sky. Jim provides his rations of food as well as a makeshift canteen and when tragedy strikes uses amateur stitching techniques guided by nothing more than the adrenaline pulsing through his veins. Gorgeously meditative — Terrence Malick would applaud Wilson’s patience and eye for detail in rendering miles of greenery into a character of its own — we’re thrust into the action without exposition, meaning, or purpose, besides acknowledging Canopy‘s exercise in mankind’s implicit ability to trust, share, and protect as strength. Day turns to night in a gradual darkening of frame while nightmarish dreams strobe through the transition at a rapid pace. Only the rural recollections of an Australia Jim may never see again sparked by Billie Holiday‘s “Yours and Mine” allows us something beyond the jungle’s dirt-stained and sweaty inhabitants holding tight to what life they have left before their inevitable capture. The majesty of rolling outback fields juxtaposed against green expanses littered by miniature paper Japanese flags expressing his unspoken yearning for home.

You mustn’t forget, however, that this is home for Seng. For him normalcy has been erased in a fight to win back what’s been taken from him. God’s land brimming with the warmth of nature once his birthright now a warzone where his mere presence earns certain death. The jungle with its hidden creatures is simultaneously foreign and familiar, heaven and hell, salvation through its cover and destruction courtesy of its harshness. Its stillness is wrenched in pain with each flash of light and earthquake of mortar shells, shrouded in darkness and impenetrable in light with Chittenden and Tzu-yi subtracting ego and identity into a union for survival. Their bond transcends name, nationality, and language—one to last into the afterlife, as brothers of a shared altruistic experience no outsider can ever begin to understand.