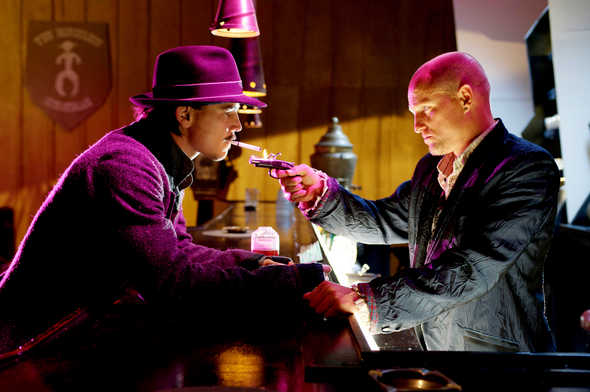 In writer/director Guy Moshe‘s Bunraku, a silent stranger rides into a lawless town on a rickety train. Let’s call this cowboy The Drifter (Josh Hartnett). He heads straight for the bar, looking for The Woodcutter (Ron Perlman), the most powerful man east of the Atlantic. He won’t say why he wants to kill him, only that anyone who gets in his way is going to get hurt.

Another stranger rides into the same lawless town on the same lawless train. Let’s call this samurai Yoshi (Japanese superstar Gackt). He heads for the bar, looking for information about a man named Nicola. Nicola stole a dragon talisman from his family, and Yoshi wants to avenge his father by taking it back. Anyone who gets in his way is going to get hurt.

It just so happens that Nicola the Woodcutter is a shadowy crime lord who rules the town with the help of his 9 head assassins and the nefarious Red Gang. The citizens live in fear,  powerless in the face of their brutal oppressors.

Bunraku is set in a dystopian future where guns are banned and the blade is the weapon of choice. The stylized world, with scenery made of folding paper and lighting that adjusts to moods, is unlike anything ever put to celluloid. Early comparisons to Robert Rodriguez‘s Sin City, are just plain inaccurate. No movie has ever looked like this.

Of course, Bunraku isn’t entirely original. Its two intertwining plotlines are both much older than motion picture technology used here to convey them. The silent stranger cowboy, the deadly samurai who seeks  revenge, both ending up a part of a bigger struggle, these are stories that have been told time (A Fistful of Dollars) and time (Harakiri) again.

By taking these two similar genres and combining them into one narrative, though, Moshe has created a film that very much deserves to be seen. The fact that there are two storylines to first connect and later resolve adds length to the movie that impatient viewers won’t appreciate, but I refuse to complain about a single frame of this visual masterpiece purely on the basis of time. Bunraku is the Reese’s Peanut Butter Cup of eye candy. If you say you don’t like it, you’re either lying or you’re wrong, and you sure as hell won’t ever have enough.

Moshe could easily have sat back and let his breathtaking cityscapes and set pieces do all the work for him, but he didn’t. He swivels and pans and twists the camera around the characters over what looks like a theater stage rather than cutting from one to another. Instead of jumping from scene to scene, he pulls the camera far over the skyline, then races it through the city or out to the forest compound and directly to the next set. This makes the whole movie look like a long, intricate shot filmed on an impossibly huge set in a world where paper scenery is constantly folding and shifting. See it before you believe it.

I’m going to talk about the acting now, but honestly, that’s not why you’re going to see this movie. Hartnett and Gackt, while unremarkable, are entirely competent as their respective archetypes. Woody Harrelson‘s The Bartender is predictably at home in the role. Perlman is enormous and intimidating, and those were probably the biggest requirements for any actor looking to take on The Woodcutter.

Kevin McKidd (Rome) does deserve a bit of special attention for his portrayal of The Woodcutter’s right-hand man, Killer #2. The Scottish actor plays the fearsome assassin like a cross between Fred Astaire and samurai Patrick Stewart. He brings a very specific physicality and personal flair to the role, and his character was a fan favorite outside the film’s TIFF midnight madness premiere.

Depending on viewer opinion, Bunraku‘s plot is either classic or cliched. If you want to fault the film for being derivative, that’s your business. I’m not going to, both because every other film that’s had a similar premise has been equally derivative and because Moshe pulls two such stories off in a single narrative without so much as a single hiccup.  Even if you can’t bear the thought of another nameless cowboy or samurai stranger, the movie’s images will enter your eyes and explode out the back of your open skull like the bullets its characters aren’t allowed to have.  Look for it by the end of 2010.