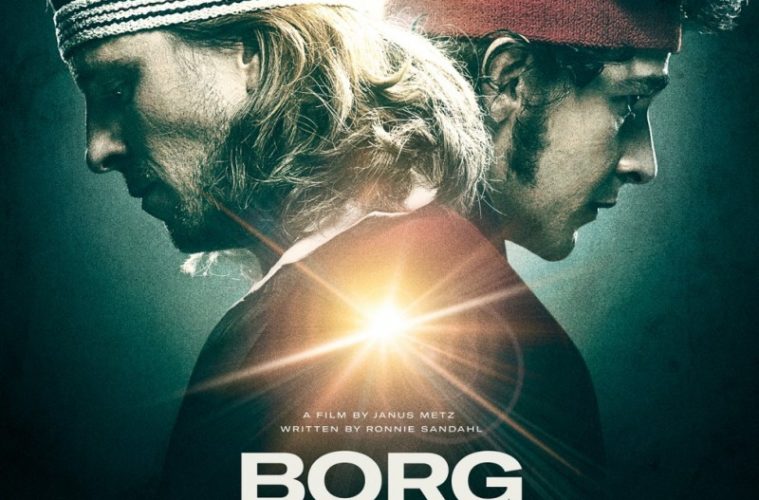 Juan Martin del Potro just ruined the match-up everyone wanted to see at the 2017 US Open—a semi-final pitting Rafa Nadal against Roger Federer. Despite both being in their thirties, their rivalry has never stopped. What’s intriguing, however, is how amiable it has always been (or seemed to be). With the quieter Pete Sampras and emotional Andre Agassi a generation earlier, the same was true despite their differing personalities and server versus returner billing. You could call the former a product of the latter and the latter a product of the explosive combat before them between “ice cold” Björn Borg and New York “superbrat” John McEnroe. The glaring difference of course is that their iconic war was augmented off-court by the media. It may have only really lasted two years, but the effect it had on the sport of tennis was permanent.

Danish director (of documentary Armadillo fame) Janus Metz and screenwriter Ronnie Sandahl look to shine a light on this fact with their biographic art film Borg/McEnroe. I say art film because the result is not your usual sports movie, focusing on one figure through montage until the big match arrives with thrilling victory or devastating but empowering defeat. The whole does focus on a single event—the 1980 Wimbledon tournament—but the tennis itself takes a backseat to the men playing it. We hear a lot of dialogue from broadcasters and journalists playing up the drama of Borg (Sverrir Gudnason) seeking a fifth consecutive championship and McEnroe (Shia LaBeouf) as the brashly talented newcomer hoping to unseat him, but the struggles we watch them face individually come from within rather than the other.

To achieve this, Metz and company must go back to each man’s beginnings. He shows the young Swede hitting balls against a garage door when not letting his rage erupt against other children, his focus tenuous at best. We see the young New Yorker idolizing Borg and adopting his trademarked headband, his own seething rage able to center him with a special brand of calm. Borg is taken under the wing of Lennart Bergelin (Stellan Skarsgård), a coach who sees a winner within if only he can control that anger. McEnroe remains in his father’s (Ian Blackman) hands, someone with the serenity he never could adopt. We move back and forth between them, each memory inferring upon a present-day (1980) feeling. Borg is now a powder-keg ready to blow while McEnroe tightens up to the realization no one (players and fans alike) likes him. One has let himself be ruled; the other cannot be tamed.

It isn’t an equal split since McEnroe wears his heart and emotions on his sleeve, rendering it unnecessary to travel too deeply into his psyche. Borg is where the intrigue lies. He’s a talent who could have easily let his temper rule him, but he found a way to internalize those demons and wield them on the court. A lot more is therefore needed to teach us who he is as a man and player—both exposed as two very different entities, a truth his professional success had yet to let him accept. So while we’ll see quick asides of John yelling, partying, or discovering he may literally be allergic to contrition, we’ll contrastingly receive lengthy spells where Björn is molded, handled, and stifled into the great he became. He’s the one with everything to lose and he’s wondering if perhaps losing is how he’ll find escape.

Both actors do very well embodying their character straight down to the way they move on the court. But as Metz shows during the climactic championship bout, those movements and the actual match are secondary to them as human beings struggling with their identities and fame. We see a lot of close-ups, quick-cut long shots wherein one player is blurred and the other back to camera (assumedly stand-in athletes), and overhead views for an artistic flavor. Demeanor becomes more important than the score—tie-breaks even get fast-forwarded through montage or simple, superimposed graphics. Who wins becomes an afterthought as how the one will take his victory and the other his defeat proves paramount. We learn a lot about each from the result.

And while I would have liked more tennis—even if they used archival footage of the match itself—I understand the decision to focus where the filmmakers do. Because this rivalry was so short-lived and so intrinsically connected to the marketing machine at their backs, the tennis is somewhat inconsequential. This Wimbledon therefore proves a turning point in their maturation as people more than of their careers. You cannot deny the appeal of stripping away the talk so we see the vulnerability swirling beneath. Both men want to win, be the best, and do so without compromising. In the end you may say they each fail at the latter, but something about their decisions ensure we know they made them for themselves and not those suggesting them.

They are made sympathetic, any animosity focused inward rather than out. We feel for their respective trajectories and understand what it is they each face on a daily basis in such an unforgiving spotlight. Their processes (methodically compulsive in Borg’s case and seemingly unpremeditated in McEnroe’s) become a huge part of how we perceive them as well as those judging them onscreen. You almost wouldn’t blame them for forfeiting to just get the circus over with and yet they deliver a match for the ages instead—their professionalism winning out over insecurities and psychological unrest. It’s easy to forget these are twenty-year old kids on an international stage representing nations. How wouldn’t the “fun” of the game be hard to sustain?

The finished product won’t necessarily wow anyone, but Borg/McEnroe is a success nevertheless. It’s a worthwhile document of tennis history and that of two of its greats. And if nothing else I’m about to search YouTube for actual footage of this match and the one from 1981. Metz has portrayed their motivations and the turmoil surrounding them—all context is here to be digested and interpreted as you see fit (depending on your impressions of athletes as human beings under extreme mental and physical duress or celebrities making way too much money to play a game). Their heroics and legendary status as complex and flawed men is cemented. As a tennis fan, however, the duel itself has a lot to say too.

Borg/McEnroe premiered at the Toronto International Film Festival and will be released on April 13.