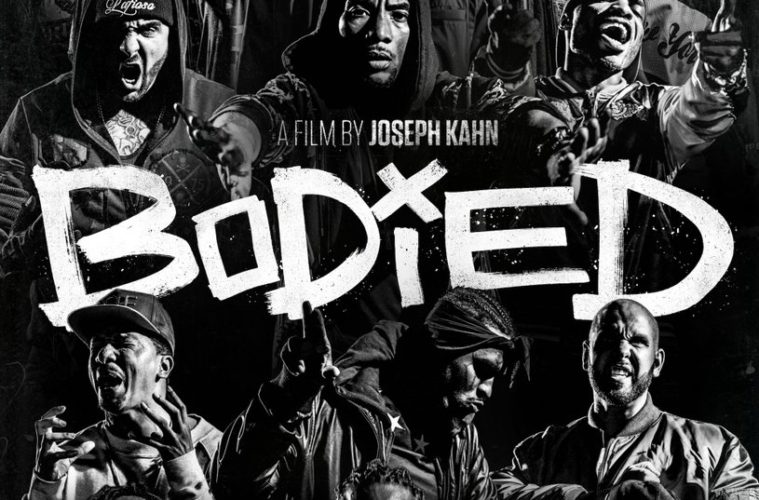 This writer will admit that he joked to a friend recently about music video director Joseph Kahn’s slow feature film output over the last 13 years as almost making him the new Terrence Malick. While don’t take that as anything more than a goof, each of his three features do represent a very specific point in time that’s bound to be dated within a short period. His first feature Torque arrived in the middle of the Neal Moritz renaissance and was Kahn’s stealth attempt to smuggle a parody of The Fast and The Furious beer commercial aesthetic within an actual Fast and Furious knock-off. The second, Detention, came at the dawn of social media dominance, as obnoxious and scatterbrained a millennial anthem one could hope for.

Now arrives the third feature, Bodied, coming at the beginning of “Trump’s America,” and it is, if anything, a middle-finger to “The Movie We Need Right Now” ethos dolloped out on a daily basis. The most ideological of the three, it’s also formally a bit more inconsistent than the previous two, which saw Kahn taking all the skills learned from hundreds of music videos to the extreme for the sake of deconstructionist pop-filmmaking. Bodied is as much a “pop” film, but it definitely feels a little rougher around the edges, if justly suited to its underground California battle rap setting. Though that may have to also do with the fact that the film’s chief concern is words.

Above all a rapid joke machine that targets virtue signaling wokeness, rich kid Marxism, white privilege, cultural appropriation, and the double-edged sword of freedom of speech, the film can at times be as almost as much a furious indulgence in contradictions as the wackiest Spike Lee joints. Though perhaps its viewpoint is less figuring out its ideology as it goes along as it is simply sticking up its nose at everything.

The film finds its way in through the lily white Berkeley student Adam (Calum Worthy, looking like a mix of Tobey Maguire and Caleb Landry Jones), who gets thrust into the world of battle rap when conducting research for his graduate thesis on, yes, the use of the n-word in hip-hop. Taken under the wing of battle rap star Ben Grimm (Jackie Long), Adam is still almost never not the butt of the joke. Armed with a large IQ but more importantly a lack of self-awareness, he crosses a line when battling Korean rapper Dumbfoundead, dropping a number of racist Asian jokes involving eyesight and small genitals. Attaining a level of transgression that gains him both notoriety and a name brand, Adam sets about a path that takes him far out of academia’s “safe space.”

Boasting creative input by Kahn’s past collaborator Eminem, the film functions like something of a revisitation of 8 Mile, though one if its best conceits is in how it flips that film’s lower-class milieu on its head. Looking at this versus that 2002 film, Adam’s privilege seems to point to the lack of class consciousness in recent American cinema. The “white savior,” a concept which again this parodies, is pointed out as a product of something far more insidious within culture.

Though it should be noted that for all of Bodied’s virtues, this writer felt at times that the TIFF version he saw may have been a rough cut; the film feels a little baggy at two hours and the joke batting average is perhaps a little lower than one hoped for. That being said, Kahn’s film taken on its own terms doesn’t seem to be striving for anything beyond an in-the-moment provocation, even if it has the occasional insight.

Bodied premiered at the Toronto International Film Festival and will open on November 2, 2018.