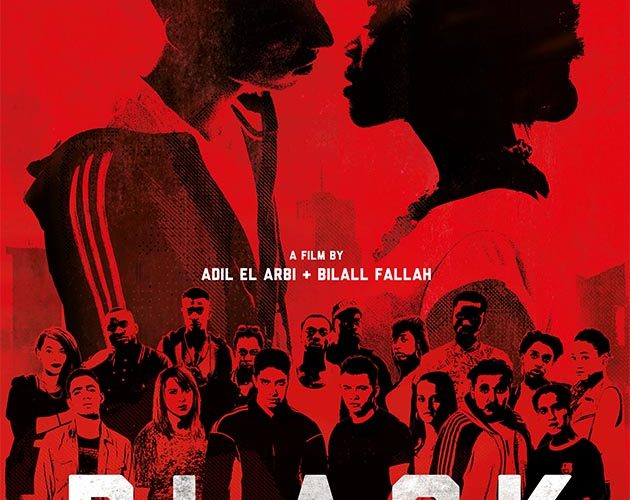 The buzz on Adil El Arbi and Bilall Fallah‘s film Black is that it’s a contemporary take on a Shakespearean classic. Saying as much is an apt description and Romero and Juliet is most certainly an inspiration, but what’s neglected to be mentioned are the two novels by Dirk Bracke on which it’s actually based upon. The author’s Black and Back depict the violence occurring in Brussels as a result of a gang culture raised from youth unemployment rates that are through the roof. Between the Dutch, Flemish, French, and Arabs mixing together like oil and water in a city out of control, it’s no surprise that tensions would mount to ignite them against one another. The lifestyle pays with money, sex, and street cred—no one talks to the police and retribution is eye for an eye. These kids can’t see any other life when it’s impossible for their parents to survive with prejudice and racism blocking them from doing much of anything themselves. Skin color and language become crutches except within each singular community. The 1080s born of Moroccan descent see jail as their only option and the Black Bronx take cruelty and crime to another level with ties to African drug kingpins. Where the former consists of family and friends going wild purse snatching, the latter arm themselves with guns and chips on their shoulders to demand respect from anyone crossing their turf. Unfortunately for Marwan (Aboubakr Bensaïhi) and Mavela (Martha Canga Antonio), members of these aforementioned gangs respectively, once they’re in they’re in for life. Love only gets them so far before secrets are uncovered and pain is left in their wake.

With blaring hip-hop and a stylistically visual flair, Black holds its own with anything coming out of Hollywood with similar subject matter. There’s humor to the proceedings considering we’re dealing with teenagers running amok before any stakes can increase tenfold into a war of possession. This is crucial too because we have to like both of the leads despite what they may find themselves doing in the heat of the moment with their brethren watching. From the start we know Mavela is caught in a dangerous situation because there weren’t any other options. She sees her mother struggling to assimilate and be accepted, so why bother trying herself? But every time something crazy happens around her, she knows it’s wrong. As for Marwan, we aren’t initially certain. Eventually, though, we understand his remorse and potential to be better. It won’t be an easy road with the lethal X (Emmanuel Tahon) pushing hard to enforce gang rule on Mavela—something we cringe in the assumption of rape connotations—and Marwan’s own brother Nassim (Soufiane Chilah) expecting loyalty after taking the rap for his crime. These young lovers find themselves on a slippery enough slope to have met while in police custody mere days before crossing paths again on a subway station battlefield fought in the name of a disrespect and “honor”. Despite all that, though, they stick together, their courtship proving to be one of an evolving romance while chaos threatens to swallow them whole. But like I said before, secrets always have a way of reaching the exact parties they were originally made hidden from. And once that happens you can throw the rulebook out the window.

A lot happens plot-wise to surround this unsanctioned union between rival gang members. The hatred between the two groups is one that ensures their paths will zigzag with each other multiple times on accident if not intentionally so. Faces are never forgotten and beefs owed never unpaid. But while we know X and his cronies will revel in the carnage just as Nassim’s boys will do what’s necessary to never back down from a fight despite being nowhere near as ruthless, we are completely unprepared for what Mavela will do to survive. El Arbi and Fallah fearlessly show us the horrific realities of this lifestyle with a brutality that should be—and is—difficult to watch. Just because they’ll follow a character away from an assault in one scene doesn’t mean they’ll do the same with the next. And looming above is the knowledge that Mavela and Marwan might have escaped given a few more hours. In their minds they already had before getting dragged back in. This makes her transformation in the aftermath harder to take and his attempts to reject his birthright all the more devastating. Not once does either’s actions read false thanks to a fantastic supporting cast of complex souls willing to do what’s right when it may be too late and a handful of two-dimensional pawns doing exactly what we expect so the rest can wrestle consciences. Even the tense, adversarial relationship Marwan and Mavela cultivate with the police brings the type of believable dynamic that made The Wire so good. Mina (Sanaa Alaoui) and Fabrice (Claude Musungayi) foremost want to help them, but they’ll lock both up just the same.

Aboubakr Bensaïhi and Martha Canga Antonio deliver unforgettable performances as these two teenagers in way over their head. So beaten down and broken to think happiness beyond instant gratification is impossible, they embrace a life built to destroy them. Finding love signs their death warrants because it cannot exist in a world where lovers are traded and discarded on a whim. What can they do other than accept their fates? Be abused so the other can be spared. The race card only amplifies things with the hate spewing forth without credible reasoning here in America. Such absurdity is on full display with Mavela calling Marwan out, laughing as he flirts with her knowing he’d never allow his sister to date a black man. The real tragedy is their love being feared because it proves we’re all human after all.