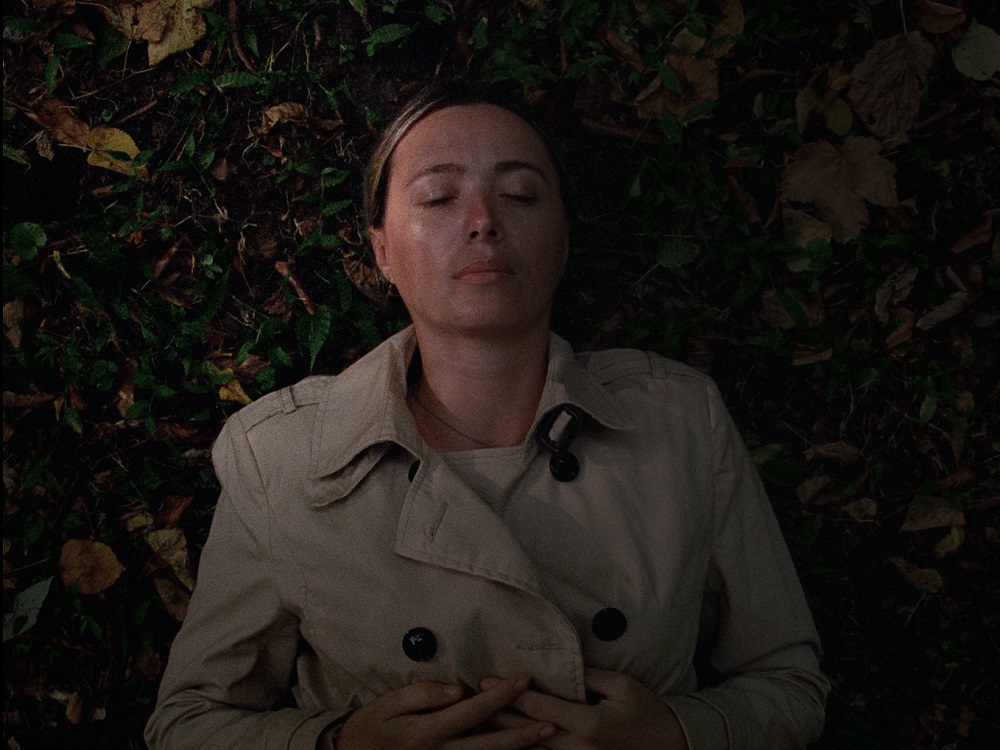 Beginning, Dea Kulumbegashvili’s debut feature, announces its director’s arrival on the arthouse scene with several bangs. In a lengthy opening shot, a group of Jehovah’s Witnesses in a rural Georgian community have their service interrupted by someone throwing molotov cocktails in their church. Everyone gets out alive, but the building gets reduced to ash and the (Orthodox Christian) townspeople won’t help them. Within several shots, Kulumbegashvili establishes the setting, story, tense mood, and her own precise style by shooting on 35mm in Academy ratio.

It takes some time before the film hones in on Yana (Ia Sukhitashvili), the wife of priest David (Rati Oneli), and their fracturing relationship. She’s experiencing an existential crisis (“I look into the mirror and a stranger looks back,” she tells David) as a result of putting aside her own dreams to stick to the faith and her husband. David goes on a trip to convince the elders to provide funds for rebuilding, and while he’s away Yana finds herself at the mercy of corrupt police officer Alex (Kakha Kintsurashvili), who terrorizes her into convincing David to withdraw his complaint about the arson. Yana wants justice (whether it’s a genuine feeling or just an outlet for her deeper issues is never made clear), and her defiance against Alex puts her on a tragic path.

Much of Beginning’s opening act feels dedicated to destabilizing expectations. A shot of children playing in a field while the church burns behind them doesn’t cut once they exit the frame. Instead, the camera slowly drifts out of focus, reducing the fire to a blur before one of the playing kids walks back into frame in a sharp focused close-up. An adult hand (Alex’s, as we soon find out) appears from the other end of the frame and grabs the boy by the nose, then heads toward the fire. The entire scene, unfolding in a single take with a stationary camera, is unexpected in almost every way with how it connects each independent moment together. Assumptions about where a scene begins and ends, and especially a scene’s function in regard to narrative, all get thrown out in favor of something on Kulumbegashvili’s terms, and her alluring imagery (with the aid of DP Arseni Khachaturan) creates a desire to find out what those terms are.

As Yana’s character develops, Beginning paints a psychological portrait of a woman who never had the chance to live her own life, and now finds herself suffering for living a life she never really wanted. Kulumbegashvili gradually reveals her big gambit, where the film begins adapting itself to Yana’s point of view the further she breaks down psychologically, leading to several surprising sequences. But at around the halfway mark, Beginning makes a decision with its story that the film never really recovers from. An earlier scene where Alex grills Yana about her sex life before shoving her hand down his pants already hinted at what might happen, but seeing it unfold marks a disappointing turn for the film. Everything up to the point of Yana’s violation carried a distinctive quality to it; everything from that point onward feels derivative of a certain type of arthouse movie, one that likes to showcase suffering and tragedy through refined aesthetics.

It’s disappointing to see where Beginning winds up, but that stumbling block is more worthy of disagreement than dismissal. Kulumbegashvili makes a bold choice and at least follows through on it with the same control of tone and atmosphere established from frame one. It all builds to a drastic decision from Yana that appears unjustifiable at first but ends up giving some meaning to the title (unfortunately the act itself feels like one of many awful outcomes the film could have ended up at). But a haunting, dreamlike coda to the film shows Kulumbegashvili is a name worth keeping an eye on, as Beginning’s biggest flaw is how it can’t live up to the amount of potential brimming within it.