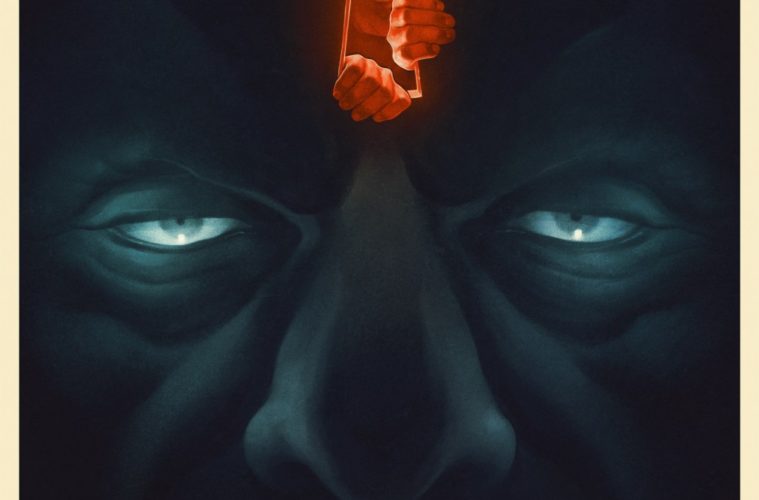 It starts off with a late night dinner scene between a quintet of cops telling crazy stories and losing their temper with the help straight out of a Tarantino movie and continues on its descent to hell with a writhing, mashing, sexual bloodletting orgy calling to mind E. Elias Merhige’s Begotten. This is Can Evrenol‘s debut feature Baskin (adapted from his own short of the same name), a journey to the depths of despair that’s at once nightmare, memory, and horrific present of unimaginable suffering. Only one glimpse of the hooded master (Mehmet Cerrahoglu) and his bucket of flesh is necessary to earn your place at the sacrificial black mass hidden within the woods and desperate for blood. Summoned or not, these police officers were destined to attend.

Rather than a supernatural monster or the demonically feral creatures we eventually do meet, the true force of Evrenol’s horror proves to be doorways. They protect us from danger, trap us within, and hold the possibility of life and death on the other side. Arda (Gorkem Kasal) knows this all too well due to a recurring dream he’s had since a child of his dead friend’s spirit visiting him with enough terror to bang on his mother’s door while a ghastly hand reaches out. He’s now a police rookie getting the lay of the land from his crass yet comical unit, engaged in a respite before the call to provide back-up in a no man’s land part of town comes. We quickly learn the badge means nothing to the people creeping around these streets.

Is the man in the hood real or just a manifestation? He supplies the chef of the run-down diner meat as our heroes await their meal, but then inexplicably appears behind a closed bathroom stall that an ill Seyfi runs to in haste. The sight of him is enough to elicit a primal scream of terror and a case of focused amnesia—telltale signs of a demonic presence picking and choosing who shall be preyed upon and when. Leader or satanic God, the dirty transients found between the restaurant and the site of their distress call willingly follow him or fear his very existence. And an inordinate amount of frogs appear to symbolize the transformation on the horizon and the spiritual rebirth of the bloodletting already in progress.

Evrenol and his cowriters Ogulcan Eren Akay, Cem Ozuduru, and Ercin Sadikoglu (who assisted in expanding the original short) revel in the blackness of their environment and the depravity of their antagonistic force. The title means raid or sudden attack and that’s exactly what they provide once Arda, Seyfi, the volatile Yavuz (Muharrem Bayrak), Apo (Mehmet Fatih Dokgoz), and their boss Remzi (Ergun Kuyucu) choose to enter a building already with dead bodies in the walkway and another cop banging his head against a wall in a trance. Each room hides a new horror of malicious figures seeking carnal and homicidal assault. But it isn’t simply a descent into this lair for torture and death—reality becomes fluid and we’re soon unsure if our feet are even touching the ground.

This is where Baskin excelled for me beyond its vile, visceral aesthetic into a puzzle of keyholes, doors, and fate. Cryptic notions of not talking about your dreams at night work their way in as we’re transported from the hooded master’s realm to the diner to Arda’s youth and back and forth with tension and fear apparently catalyzing each switch. Nightmare’s come true, memories are recycled, and we get the feeling that being awake is a luxury these men may no longer afford. These brief sojourns provide us exposition as they disorient us to the action, keeping us off-balance until control is firmly grasped by those with covered faces and deafening shrieks. They’ve been watching and waiting, drawing Arda and his fellow law men deeper and deeper into their world.

I’m not sure if the repetition and alternate vantage points of previous scenes to reveal new surprises in its destiny-fueled adventure work coherently as more than cool little twists, but I’m not sure dissecting prospective plot holes is something Evrenol’s target audience cares to do. His success lies in the entertainment value this death-ravaged orgy supplies and it has plenty to go around. The humor is authentic too as these five guys talk about soccer gambling and unforgettable brothel experiences, showing each character’s demeanor to ensure their reactions to the carnage are equally measured. Arda proves the focus as he exits rooms into other times and Remzi his confidant protector, but neither is prepared for how dire this night will turn. Not even Yavuz’s temper stands a chance.

Baskin premiered at TIFF and opens on March 25th.