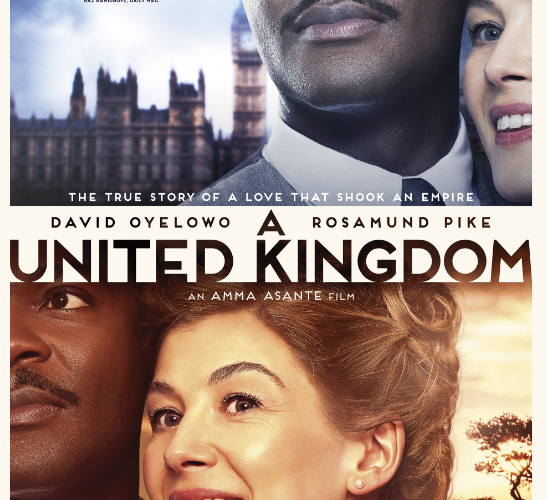 Who knew the power of love ultimately won independence for the democratic republic of Botswana? I sure didn’t. But this is the based-on-a-true-story film writer Guy Hibbert and director Amma Asante have delivered with A United Kingdom. It’s a tale of racial segregation, politically driven cowardice, and the heart prevailing over fear as two kindred spirits choose to write their own destinies. Ruth Williams (Rosamund Pike) couldn’t know the London-based missionary event her sister dragged her to would change her life forever. Seretse Khama (David Oyelowo) couldn’t have predicted in his wildest dreams the ramifications for his homeland Bechuanaland that asking her to dance would inflict. And it’s doubtful anyone would expect his amateur boxer/philosopher to reveal himself as an African prince.

Ruth and Seretse’s romance is one we’ve seen before: an interracial relationship alienating family, earning bigoted remarks in public, and showing how love trumps all. What it possesses that’s unique is a vantage point often left unconsidered. Since white America creates many of these love stories, we forget there are two sides to the prejudice. Hollywood’s white guilt makes it so we expect Ruth’s parents to forsake her decision and ignorant bystanders to pick fights. A segregated London is no different and both do occur. But don’t assume her reception in Bechuanaland will prove better. She isn’t just a white Brit entering a colony on the arm of a black man. She’s a white queen meant to represent a tribe of black women she doesn’t know or understand. This is a crazy thought to comprehend, one you cannot blame Seretse’s sister Naledi (Terry Pheto) or the King Regent holding the throne until his return (Vusi Kunene‘s Uncle Tshekedi) for refusing to accept the reality it creates. The former won’t recognize Ruth as her sister, the latter attempts to force Seretse into divorcing her or renouncing his claim as king. You wouldn’t think this ordeal would be more than a domestic squabble amongst figureheads, but you’d be wrong. This position is critical to Bechuanaland’s stability, a strong native voice to keep the peace opposite looming volatility across the border in South Africa. So it’s in Britain’s interests to ensure things remain civil and in accordance to other colonies’ desires. With Apartheid looming, this royal display becomes blasphemous.

While the true love aspect is the story’s emotional core, the film’s majority takes place during years in which Seretse and Ruth are kept apart. The journey to claim his throne turns into a legal battle, political farce, and scathing attack on human rights. British representatives (Jack Davenport‘s smugly vile Alistair Canning and Tom Felton‘s haughty Rufus Lancaster) enter to secure their nation’s interests with effective duplicity, their wives even deployed to augment their agendas. Lies are spoken and agreements made to wrest control from the Khama family without angering their people or the international powers watching. With a mining expedition potentially set to find diamonds, however, all eyes are on Africa as Bechuanaland becomes a political pawn with Seretse and Ruth sadly caught in the middle.

A singular story touching upon humanity and history, juggling both can’t avoid becoming somewhat bland in the transitions. It hits its notes when needed and ensures its leads stand firmly in their position to never back down from the happiness they deserve. But that endgame is far enough away to lose its initial impact. The film becomes compartmentalized, the whirlwind marriage and Ruth’s hope to win over Seretse’s village taking a backseat when the time for political jockeying arrives. Their love never disappears, but it can’t help prove less pronounced due to their separation. Romance makes way towards nationalism, Ruth’s desire to be by Seretse’s side paling in comparison to her support of his crown for those relying upon it to escape the greedy clutches of England.

The loss of Pike and Oyelowo’s chemistry takes away some of the spark that grabbed me. I thoroughly enjoyed watching Davenport and Felton hubristically underestimate them when stealing control, but it replaced a dramatic fire with mere entertainment. While not necessarily Asante and Hibbert’s fault considering the gap in Ruth and Seretse’s union actually happened, it does slow things down. I loved when Pike and Oyelowo got to combat their English adversaries together, shutting them up with a smile born out of intellectually besting them. I wonder if the courtroom stuff could have therefore been pushed further onto the fringes so our attention could focus on Ruth and Seretse’s struggle. A United Kingdom is obviously bigger than just them, but it’s definitely best when they’re the main focus.

Even so, the production is near flawless in period look and coherence towards what’s a rather complicated political issue consisting of numerous moving pieces. We understand why Britain looks to divide Khama’s family and why he’s desperate to stop them. But the tension is never truly born out of wondering whether their African tribe will defeat their colonizers considering the question of Ruth and Seretse reuniting demands greater emotional attention. When Bechuanaland suffers a defeat on the global stage, we don’t sympathize for the colony’s plight as much as the royal pair doomed to remain apart in the fallout. This is why it becomes frustrating when the spotlight shifts to a broader vantage point. The romance sets the film apart and yet its underutilization prevents finding full success.

In the end, the wonderful performances merely prove part of a serviceable historical drama with a desire it can’t quite fulfill of being more. The central love becomes a catalyst; the romance I believed would sustain us proving a hot-button issue at the worst possible moment that simply gets the ball rolling and mind working to separate natives and colonizers once and for all. Who knows what would have happened had Khama returned alone to take his throne? Maybe nothing. His reasons for bringing Ruth weren’t political, but the film eventually forgets this fact once it becomes politically motivated. Seretse and Ruth eventually stop being individuals, transforming instead into a concept of strength and unity bolstering the real plot despite initially seeming as though they were building it.

A United Kingdom is premiered at the Toronto International Film Festival and will be released on February 10.