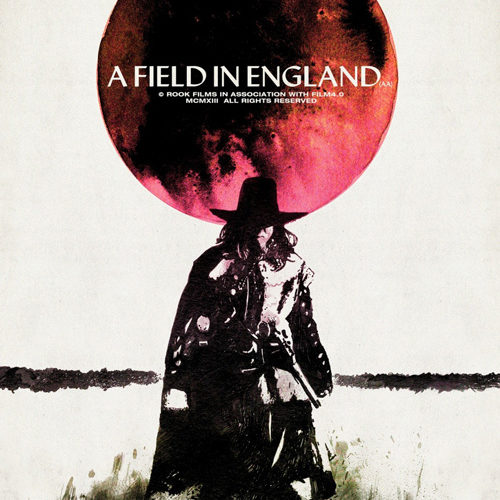 [TIFF Review] A Field in England

“A coward becomes a man” is, I suppose, the crux of Ben Wheatley’s newest thriller, A Field in England. We find Whitehead (Reece Shearsmith) hiding in the bushes while mortars explode around him during battle, weeping and praying to God to keep him hidden now that his mission (finding an elusive old comrade) seems all but futile and far too dangerous. He runs, meets a few other deserters in a mid-17th-century English Civil War pitting the Parliamentarians against the Royalist monarchy, and moves forward towards a chance at prolonging his life while, along the way, martyring himself for personal failures. A scholar amongst blue-collar men, Whitehead’s chance to prove himself once more comes courtesy of a serendipitous stumbling upon the object of his search in an overgrown field. Chaos ensues. Like Wheatley’s Kill List, A Field in England is strange, captivating, metaphoric, and utterly obtuse. There are moments of pure comedic bliss thanks to the doltish “Friend” (Richard Glover) having a simpleton’s outlook on life as well as moments of dark maliciousness from the hardened O’Neil (Michael Smiley) and Cutler (Ryan Pope) pulling the strings of the others for their personal gain. At one point, we’re dropped into a black and white warzone covered in dirt with no context whatsoever; the next, we’re seeing dead men rise with a smile, followed by a lengthy passage of avant-garde aesthetics to make us as disoriented as the characters high on hallucinogens. Equally mesmerizing and unintelligible, it begs for subsequent viewings and, possibly, even a religious interpretation to allow for proper comprehension.

But the plot itself is simple enough: Whitehead and O’Neil used to work under the same master. The latter left, the former was entrusted to find him, war broke out, and they reunite under unusually odd circumstances in a field. Whitehead’s empty words place O’Neil under arrest, O’Neil’s formidable presence turns the tables, and Whitehead is forced to divine the location of a treasure for which “Friend” and Jacob (Peter Ferdinando) must dig while Cutler stands guard. Psychedelic mushrooms are imbibed so the captors retain full control over their prisoners, everyone somehow eventually goes mad, gunshots are fired, and the devil quite literally takes over the entire proceedings with an ominously cloudy black sphere closing in from above. And at some point you begin to wonder whether any of what you’re watching is real. The words screenwriter Amy Jump puts into Whitehead’s mouth about seeing shadows can’t help but instill the possibility of everything being a dream. One character refuses to die, another is found tied to the end of a rope — which the others tug-of-war instead of simply walking over to him — and, at one point, we’re serenaded with a song. It’s a bad drug trip with a historical British context where real treasure is searched for and the metaphysical treasure of friendship is found. Bones are discovered, costumes change hands, and through it all there is an underlying aggression where two men fight in the background before being shown to be in cahoots against the rest. The surprisingly sharp humor keeps you on your toes while the mystery of truth forever remains shrouded in nightmarish insanity.

It’s what has made Wheatley a contemporary force in cinema, and one that has proven as divisive as any surrealist in the past century of film. If you don’t open yourself to the symbology and metaphor you’ll be confused, bored, and angry — but, if you do and still can’t figure out what’s happening, the frustration of being on the outside looking in is only marginally better. I’m in this second camp, trying to wrap my head around the absurdities and to understand their meanings in the context of Whitehead’s journey while, still, marveling at the bold visual choices worthy of an epileptic warning at Field‘s start. From faux static portraiture in deliberate poses to slow-motion sequences to one brilliant passage caught as though in a wind tunnel — with excised frames giving it a strobe effect — looking away proves impossible. A kaleidoscopic blending of moving images converging at the center of the screen shows the power of the drugs in a jarringly beautiful, yet almost completely on-the-nose representation — all while actors are superimposed on one another and dead characters return as if never gone. Smiley is as brutally vicious as Glover is sweetly endearing, and Shearsmith transforms from a loquaciously frightened lapdog into the soldier he adamantly refuses to admit he is. How much is real? How much is happening in the present? Who knows? In actuality, I’m not sure it matters. From a visceral standpoint, it’s uniquely attractive and inventively artistic, while the story turns into a devilish journey inside the tragedy of war. There’s enough to be glad I explored, and enough to continue hoping Wheatley makes that masterpiece his experimentations seem to promise.