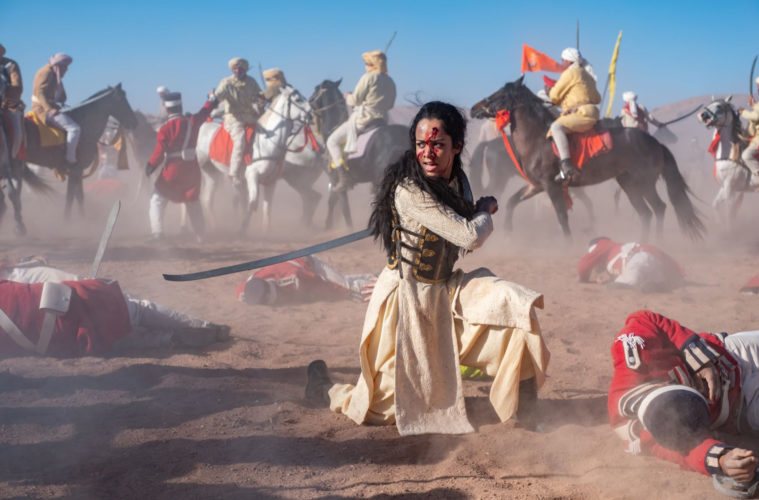 ‘The Warrior Queen of Jhansi’ Review: A Story of Heroism Stripped of Complexity

The part Rani Lakshmibai (Devika Bhise) played during the 1857 Indian mutiny against the British East India Company is massive. A great moment of perseverance and rebellion on its own, this queen became a much-needed symbol for whom her persecuted people and dwindling allies could rally behind. Widowed five years earlier with an adopted son set to inherit the throne, England presumed a moment of weakness to seize her kingdom as its own. Believing Jhansi’s allegiance to this point gave them cause to simply take over, they didn’t anticipate her staunch opposition. Lakshmibai instead decides to train the women under her rule to sword fight like her father taught her when she was a young commoner not yet wed to the maharaja. The Company had guns; she had purpose. It’s the type of tale born for an epic cinematic adaptation a la Braveheart with rousing speeches, violent battles, and pure heroism. You can sense this is exactly Bhise’s hope for The Warrior Queen of Jhansi alongside co-writers Olivia Emden and mother/director Swati Bhise because each of those aspects is clearly present. Had they kept focus upon the central Indian struggle so we could truly understand their plight and the strength necessary to keep going despite long odds, it might have worked too. Just like so many war films coming out of America lean towards jingoistic extremes with soldiers devoid of flaws and enemies sent from hell, however, Bhise and company go out of their way to spend half their runtime ensuring we know the British are monsters.

That’s a given, though. We’re talking about a colony rebelling against colonizers so of course the latter are to be transparently seen as evil. You have Sir Robert Hamilton (Nathaniel Parker) leading a crusade of bloodlust despite never holding a gun in his life, barking orders to an obviously tired Sir Hugh Rose (Rupert Everett) who will continue to blindly follow orders regardless of their malice. And there’s Lord Palmerston (Derek Jacobi) trying to talk Queen Victoria (Jodhi May) into letting them destroy Jhansi to be rid of the drama even though The Company has made many mistakes to exacerbate the situation for no reason other than raising their profit margin. She (with guidance from her Muslim Indian advisor) refuses—even though they go ahead anyway. Herein lies the problem. For some reason the filmmakers don’t feel the feminist angle of their lead (a badass queen who can drive a sword through her enemy’s heart while also teaching her son that the throne is about compassion rather than force) is enough to drive their point of “changing times” and toxic men home. The way Lakshmibai is written guarantees this idea comes across nonetheless because she’s more a vessel built for it than the history on display. And that’s okay. That’s the power of her story. What we don’t need, however, is scene upon scene of British men getting frustrated and a Queen willing to stand-up to them despite proving she has no real power to control their actions.

You could argue that’s intentional because it shows how Indian culture lets a woman rule for real while the Anglo Saxons do not, but that would then turn a worthwhile battle for gender equality into one with ethnic stipulations. If you’re going to spend all this time showing how Victoria disagrees with her male officials, you must show her ability to make her voice heard. It’s necessary because her counterpart most definitely does. When Lakshmibai wants something done, it gets done. When she asks men for loyalty or help, they listen. And she doesn’t do it for glory. She doesn’t do it to maintain a reputation (Victoria’s main motivation as described by the text). No, she does it for the wellbeing and freedom of her people. That’s brilliant because it offers an authentic example to women and girls the world over of a hero outside history’s male-centric view. Lakshmibai is like an Indian Joan of Arc (as one character remarks) because she’ll run to the frontlines and fight for what she knows is right. That knowledge is key since she never acts out of self-interest or with brutality in mind. She’s the kind of ruler that ensures those from the opposite side who take the time to meet her will do whatever they can to help her succeed. British Major Ellis (Ben Lamb) is introduced as an integral friend in this way. Besides serving as a mirror to show men like Hamilton wield cruelty as a choice, however, he’s dead weight to the plot.

But then so is most of what happens on-screen. Every time we leave Lakshmibai’s side we find ourselves treading water through staid sequences of dialogue that deliver nothing but exposition and vitriol. The latter becomes so prevalent that I began losing adulation for the queen simply because she’s conversely drawn as this perfect human. The filmmakers push hard to beat us over the head with a dynamic of good versus evil that’s already intrinsic to the circumstances. The disposable nature of that presentation therefore strips the characters of their complexity—Lakshmibai too. Bhise is good, but it’s hard to separate her performance from the heavy-handed narrative demanding we embrace her by necessity. Regardless of stirring words and emotions, her role unfortunately proves just as one-note as the rest.

The Warrior Queen of Jhansi is now in wide release.