‘The Two Popes’ Review: A Scattered Bout of Spiritual Sparring 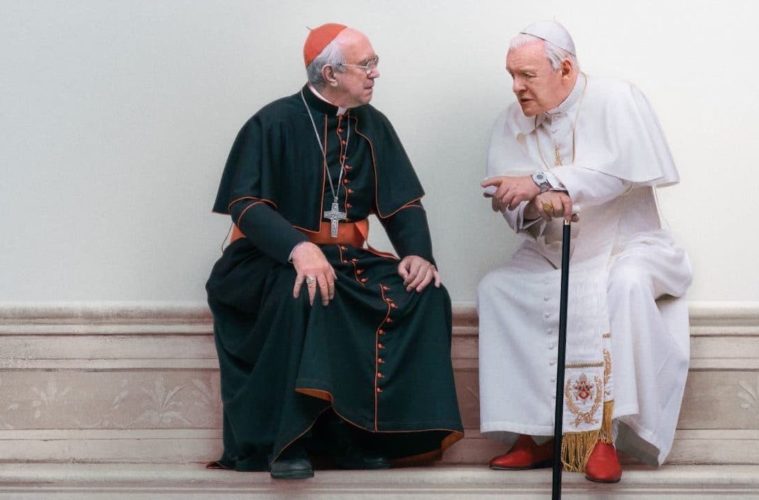 Do the principles of God change with the shifting tides of culture? This theological question is at the heart of The Two Popes. As unanswerable as the question may be, it presents an engaging-if-scattered platform for the spiritual sparring that Jonathan Pryce and Anthony Hopkins devour. Directed by Fernando Meirelles with the kind of hyperactivity that worked so well in his kinetic breakthrough City of God, that trait is unfortunately not helped here with Anthony McCarten’s script, which attempts to pack a life’s worth of history in between a few conversations.

The life at the center of the story–which takes place over many decades, but mostly 2012–is that of Argentinian Cardinal Jorge Mario Bergoglio (Pryce), who is not shy about his desire for the Catholic Church to change their stodgy, conservative ways. As the planet is being destroyed and the inequality gap continues to grow, the world built walls–figuratively and literally–and fought over hot-button issues rather than getting to the humanitarian heart at the center of Christianity. In order to attract a base of followers that continues to dwindle, Bergoglio believes the only path forward is through change. Pope Benedict XVI (Hopkins), the man of the highest cloth, diverges in this opinion with his traditional views, which leads to heated quarrels about dogma and the future of the Catholic Church when Bergoglio is invited to visit. As written in recent history, the Pope would eventually be the first one to resign in centuries, handing over the papacy to Bergoglio, who would become Pope Francis.

Before that happens, though, McCarten is keen to repeatedly jump back to different parts of Bergoglio’s life, revealing the reasons that fuel the hesitancy for accepting Pope Benedict XVI’s offer. These extended sections feature a well-cast Juan Minujín as young Bergoglio who is ostracized by fellow Jesuit priests when he doesn’t take a clear stand against the brutal military dictatorship in Argentina. These flashbacks, however, ultimately come across elongated, sluggish, and tonally at odds when compared to the more genial scenery-chewing of our two leads. Watching Pryce and Hopkins battle it out has its charms, with the two actors even occasionally opting for Italian, French, Spanish, German, Portuguese, and Latin, as subtitles are employed–a decision to which most Hollywood-backed historical dramas don’t adhere. In a humorous bit with pay-off, the Pope reveals that since only about 20% of his fellow clergy actually knows Latin, that’s how he delivers bad news. As entertaining as some of their discussions can be, the end result does leave a nagging feeling of a missed opportunity.

It’s not entirely surprising that the writer of such antiquated, timid dramas as The Theory of Everything, Darkest Hour, and Bohemian Rhapsody would script a film that opines the world is now in a great place because two men in high power were able to become friends despite their differing world-views, but the way certain issues are brought up only to check boxes feels wholly insincere. During one conversation, Bergoglio presses the Pope about the decades of sex abuse scandals in the church and immediately after it’s briefly mentioned, Meirelles drowns out dialogue and slots in a rapid-fire montage linking these travesties to images of pain in the Renaissance art throughout the Vatican. It’s one of many sections in which his penchant for over-direction skirts real issues, opting instead for crowd-pleasing quarrels.

Cinematographer César Charlone (who, fittingly, made his feature debut with The Pope’s Toilet) shoots the proceedings with the subtlety of a Paul Greengrass film. Beware the erratic handheld movements, complete with smash zooms and every format under the sun, including glaringly clean digital, actual archival footage, new footage meant to look like archival footage, black-and-white footage, and a 70s-esque documentary look. It’s a puzzling decision, as if this scattershot approach was intended to produce an immediacy and authenticity, but instead leaves almost nothing memorable on the table when all is said and done. If Meirelles and his team had a more clear-eyed vision for some of these sequences, one imagines they would feel more immersed in the proceedings rather than the pseudo-kineticism on display.

“Confession clears the mind of the sinner. It doesn’t help the victim,” Bergoglio tells the Pope during one of their conversations, a truism meant to convince him that the centuries of Catholic ceremony should be re-considered in light of the recent sex abuse scandals. Speaking to bringing a sense of Jesus-centered humanity to the religion, the Pope-to-be adds, “Communion is not an award for the virtuous, but food for the starving.” On their own, these are thought-provoking ideas to be batted around, but the film is more interested in conversation-starters then finding a way forward. It is a compelling set-up to get a fabricated what-if into a world of such high power, and Meirelles does effectively key-in on the excess and ritualistic nature that being the leader of 1.2 billion followers–and the money that brings in, in the name of God–has led to. “The carnival is over,” says Bergoglio when he takes his place as Pope Francis and declines the regalia that goes with the announcement. It’s a moment indicating a remediation of the past and a future free of ostentatious showboating. Then the credits feature an audience-coddling sequence meant to put a smile on the face of every viewer and, in return, stifle any feelings that there’s still immense issues to address and rehabilitate in the Catholic Church. It encapsulates just why The Two Popes feels entirely lacking in conviction.

The Two Popes opens in theaters on November 27 and arrives on Netflix on December 20.