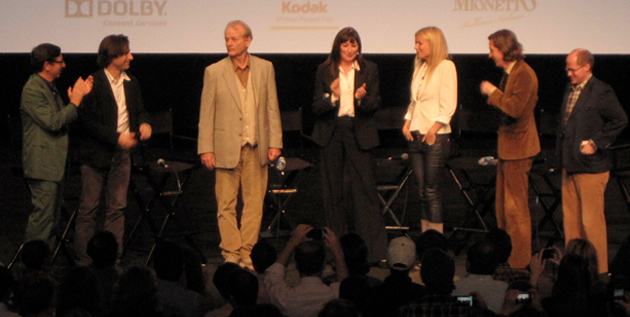 As a part of the superb line-up of the 49th New York Film Festival, The Film Society of Lincoln Center’s young patron’s group New Wave celebrated the 10th Anniversary of The Royal Tenenbaums with a screening and Q&A featuring Wes Anderson, Gwyneth Paltrow, Anjelica Huston, Bill Murray, Noah Baumbach and Eric Anderson. As someone who has long counted this quirky tale of an oddball clan of geniuses as one of her favorite films, I was among the first ticketholders to trickle into the expansive and awe-inspiring cavern that is Alice Tully Hall.

Here giddy twenty-somethings, who (like myself) must have taken to Anderson’s bittersweet yet hopeful worldview in their formative years, trickled in. Several even emulated Anderson’s recurring gentle but warm color palette in their outfits, favoring light browns, pinks and pale yellows in the forms of suit jackets, sweatervests and polo shirts. Next came a wave of college kids and soon the theater filled with people of all ages, flushed with energy and excitement over what the master of ceremonies described as a “gallery of willful eccentrics.”

Before the film began, Wes Anderson entered to ravenous applause, wearing his iconic auteur uniform: a camel-colored corduroy suit. He thanked everyone for coming, and in short order the lights went down, and the film’s colorful opening sequence filled the massive screen. 110 minutes later thunderous applause burst forth from thousands of clapping hands. Then as a spotlight revealed the evenings special guests, cries of excitement and unadulterated glee burst forth. Onto stage came the Anderson brothers followed by Paltrow, Huston, Murray and Baumbach, and life imitated art as this now classic tale of a fractured family reunited came to life before an exuberant audience. It really felt like a family reunion, from the tangible warmth and appreciation in the room to the unavoidable gossiping about absent members. A recurring topic in the evening’s discussion was Gene Hackman, who won a Golden Globe for his performance of the film’s wildly selfish yet lovable patriarch, but who was apparently a “bear” on set. Anderson and company laughed upon remembering some of the choice words Hackman had for Anderson. “He told you to, ‘Pull your pants up and act like a man!'” laughed Huston. Anderson nodded and shared that Hackman’s ire sometimes took the form of insults, “He called me worse things– well I shouldn’t say–but he called me a c*nt!”

Yet Anderson admitted he had doggedly pursued Hackman for the role of Royal, and still marvels that he landed him at all, saying, “Gene passed [on the film] for a year and a half.” He continued, “He was sort of forced to do the movie and that was not fair, really. I just kept asking him and bothering him. I just wore him down. I didn’t really have that much access to him; I don’t know how I went about that. Eventually, he just kind of caved.” The moderator asked if it’s true that Michael Caine was considered for the role of Royal, to which Anderson declared himself an admirer of Caine and his work, but insisted he was thrilled when Hackman finally signed on. “We make jokes about [Hackman] being challenging — I mean he was!” But Anderson maintained that Hackman’s tenacity made them all work harder. “He was a huge force.”

Paltrow agreed, saying of Hackman, “He was kind of a bear of a guy. But I also found something sweet and sad there.” She went onto call Hackman one of the greatest actors of all time, eliciting a wave of fervent applause from the crowd, before allowing, “You know, if you’re Gene Hackman you can be in a bad f*cking mood if you want to be!”

Anderson noted that Hackman’s gruff attitude scared many on set, but not Bill Murray, who the director felt had his back during the worst of Hackman’s moods. When pushed to comment on Hackman, Murray mused, “The word c*cksucker gets thrown around a lot these days.” The audience exploded with laughter and applause and once they settled, Murray continued, “[But] I will take that word and throw it out of this room because it doesn’t belong here!” He went onto joke that Hackman threatened to kill to crewmembers, which Murray was pretty sure the unions in New York would not allow. He then backpedaled slightly, explaining that much of Hackman’s scenes were with Luke Wilson, who was so lovestruck with Paltrow at the time that he often flubbed his lines, and Kumar Pallana who played Royal’s pink-pants-wearing sidekick Pagoda, and whose name Murray threw out with mock vitriol. He punctuated his answer by proclaiming, “If I had to work with Kumar and Luke Wilson, I’d have set fire to this whole building!” Prodding from Anderson prompted Murray to talk about the person with whom he spent the most screentime, Stephen Lea Sheppard, who played the uniquely afflicted Dudley. Murray said Sheppard was very much like his onscreen persona, “That’s what he looks like and that’s how he is…pretty much all the time…He was scarier than Gene Hackman!”

Another surprise to Tenenbaums fans was that in an early draft of the film’s script, Mordecai was not the name of Richie’s loyal falcon, but rather the name of a boy who lived in the attic of the neighboring embassy, a part Wes had intended for Jason Shwartzman. Sadly, the focus shifted before Anderson had a chance to explain why this element of the film had changed.

Other “almosts” included a bid to involve more Beatles music in the film’s (now iconic) soundtrack. Anderson so wanted certain tracks that he enlisted Paltrow, who is friends with Paul McCartney’s fashion designer daughter Stella McCartney, to get the rights by any means necessary. “I tried to bribe Paul McCartney,” Paltrow joked, “with sex and everything!” She did in fact take him a copy of the film, and then out bowling, at which point McCartney told her he loved the movie, but had no control over the rights to the Beatles’ songs. When fans asked if this version of The Royal Tenenbaums still exists somewhere, Murray quipped that apparently Paul McCartney has a copy.

The moderator did attempt to get Anderson to give up some details on his next effort, Moonrise Kingdom, but aside from revealing that it’s in postproduction, Anderson was tight-lipped, insisting he wasn’t prepared to talk about it yet other than to say, “I think it’s going to be good!” As to other future projects he did admit a long-held aspiration to work in the theater, particularly in New York, saying, “I would really love to do a play…that world really appeals to me.”

For all the joking and joviality, it may be Paltrow who best summed up Anderson’s abiding allure. Asked to explain what sets him apart from other directors, she said it was his specificity, explaining, “You step into his specific amazing world, and you just feel you want to live there.” For the audience who’d gathered at Alice Tully Hall that night, this is certainly true.