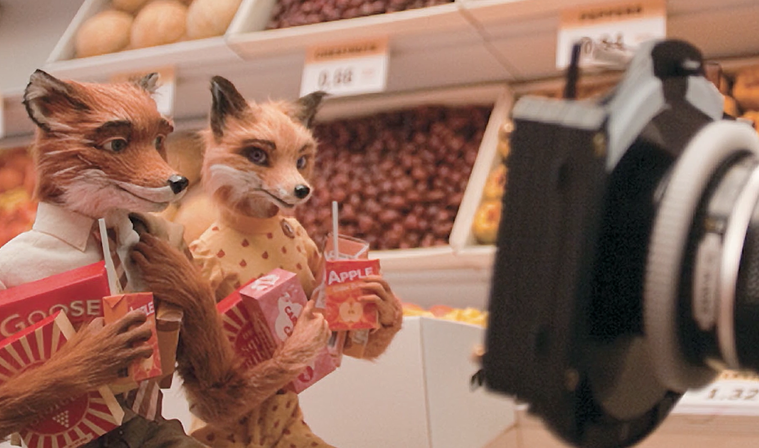 The year’s end often features a rush of gift books, many of them ideal for the discerning cinephile. 2013 is no exception and the selections are stunning. Below one will find a handful of our top recommendations, as well as a few quick hits for the holiday season. Quite simply, Matt Zoller Seitz’s Wes Anderson Collection is the film book of the year, a gorgeous, immaculately designed, painstakingly detailed, wonderfully written treasure trove. No Anderson fan could ask for anything better. It is a career overview (storyboard, maps, and more from Bottle Rocket to Moonrise Kingdom, interview collection (Anderson’s comments on casting Gene Hackman are particularly insightful), design study (the images from Moonrise and The Fantastic Mr. Fox are particularly delightful), and, well, pretty much everything else. The book is a must-have, for Anderson’s linking of The Royal Tenenbaums and Witness alone: “Harrison Ford, after he’s shot, says, ‘I know you asshole!’ And Gene Hackman says that in Tenebaums: ‘I know you asshole!’” (Abrams) An extensive, lengthy (nearly 300 pages) coffee table book, Greenberg’s Polanski text does what the recent documentary Roman Polanski: A Film Memoir could not: offers fresh insight into the films of a cinematic master. Polanski writes the book’s forward (“Why do I go on doing it? Simply because I enjoy it”), and is interviewed throughout. What is especially thrilling is that the text does not skimp on any of the films—What? and Pirates, for example, are here, not just Rosemary’s Baby and The Pianist. From rare photos and poster art to breathtaking stills, it’s a beautiful creation. And Polanski is his usual wry self; on the tone of The Ninth Gate, and its misreading by many viewers: “There was no footnote in the script that said you were supposed to laugh at a scene, but that’s how I see it. Maybe people would have had more fun if I’d played it broader.” (Abrams) The concept behind Elder’s book is a fun one: A varied collection of filmmakers—John Waters, Danny Boyle, Edgar Wright, Richard Kelly—discuss “the forgotten or critically savaged movies they love.” This makes for an uneven, but eclectic bunch, with everything from Can’t Stop the Music and The Honeymoon Killers to Fearless and Killer Klowns From Outer Space getting some love. John Dahl offers a spirited defense of fellow Montana native David Lynch’s Twin Peaks: Fire Walk With Me (although Dahl seems ignorant to the charms of the opening Chester Desmond sequence), and, best of all, Jay Duplass breaks down why Joe Versus the Volcano us an underrated gem: “I see it as a weird-ass little piece of art that I’ve never quite seen anything like before—or after.” (Chicago Review Press) In his own inimitable way, Roger Corman is as important and influential a filmmaker as Roman Polanski, and Entertainment Weekly’s Nashawaty makes that clear in this fun look at the B-movie kingpin’s career, his role in the careers of the likes of Scorsese and Cameron, and his utterly unique oeuvre. We have heard many of these stories before, from the clever way Ron Howard snagged his first directing gig to Corman’s collaborations with a young Jack Nicholson. But there is real joy in each story, and it is especially nice to read new interviews with Nicholson, Peter Bogdanovich, Jonathan Demme, and many, many more. It has also made me desperate to track down Katt Shea Ruben’s Stripped to Kill, so there you go. (Abrams)

Moments That Made the Movies by David Thomson I’m not sure Biographical Dictionary of Film author and critic Thomson could be more prolific. But again and again, he finds wildly fascinating new ways to ponder, judge, and write about the movies. His latest book examines a diverse mix of films (The Passion of Joan of Arc and Blow-Up, but also Mickey One and Burn After Reading), and asks the question, “Well, what is a movie moment?” Those familiar with Thomson’s work won’t be surprised to see him discuss Birth and In the Cut, but no one could have seen Hoffa coming. His finest writing is the chapter on Rivette’s Celine and Julie Go Boating. In it, Thomson hits on a feeling increasingly lost as films become more and more available at the push of a button: “The film has not yet been put on DVD in America, and I like it all the more for that. So it is hard to get at, elusive, difficult to see … Still, we should not be deceived by the chronic availability of DVDs. We need to know there are unattainable things, or films we must search for. Or wait for. There is no desire without that frustration.” (Thames & Hudson) What do you say about the film that’s been discussed from one end of the earth to the other, every single piece – glowing briefcases, golden watches, gimps, $5 milkshakes, misplaced (?) bullet holes in an apartment wall – now its own special thing, almost to the point of exhaustion? (Okay, maybe not that last one.) Since its release, no film has had the same impact as Pulp Fiction, but the extent to which it shaped our cinematic landscape hasn’t always been delved into with the deserved termitic qualities – so, enter Pulp Fiction: The Complete Story of Quentin Tarantino’s Masterpiece, an oversized hardcover text that does exactly what its titles promises. Jason Bailey writes of the 1994 Palme d’Or winner with the reverence it still deserves so dearly while, too, looking at the filmography of its creator, from the obvious to the lesser-known – how exciting it is to have some writing that explains the writer-director’s involvement with Past Midnight, that in immediate proximity with an unexpected origin story for From Dusk Till Dawn – and providing the sort of historical overview a work of this magnitude simply demands. – Nick N. (Voyageur Press)

It is a bit of a shock that Tartt’s modern classic The Secret History has never been filmed; if there is any justice, The Goldfinch, an epic exploration of art, adolescence, and America itself, will be given the deluxe HBO treatment. (Little, Brown and Company.) Stephen King’s Doctor Sleep is the horror icon’s horribly titled, slightly batshit sequel to The Shining, and while it doesn’t quite compare to King’s story of Jack Torrance, this Danny-focused follow-up is always readable, even if, for many readers, it is impossible to not think of Kubrick’s Shining while reading King’s text. (Scribner)

Jo Nesbo’s Harry Hole was once set to hit screens under the direction of Martin Scorsese, and while The Snowman did not happen, it is only a matter of time before the grizzled Norwegian detective comes to life at the cinema. Police is just as compelling as Nesbo’s earlier Hole tales; interestingly, Hole is gone for much of the novel, for reasons … you’ll have to discover for yourself. (Knopf) Sometime in 2014, we will see Paul Thomas Anderson’s Inherent Vice, the first instance in which a book by Gravity’s Rainbow author Thomas Pynchon has been authorized for an adaptation. The elegantly wasted Vice was an apt choice, but Pynchon’s newest book would also make for an ambitious flick. Bleeding Edge is the author’s genre-hopping chronicle of post-dot-com crash, pre-9/11 America, and I demand PTA make it his Inherent Vice follow-up. (Penguin Press)

Lastly is Artie Lange’s Crash and Burn, and if this sounds funny to anyone, you don’t know Artie. The former Howard Stern Show castmember’s follow-up to Too Fat to Fish is a dark and moving account of addiction and near death. Someone book Lange a one-man show and start filming, asap. (Touchstone)

What film books would you recommend this season?