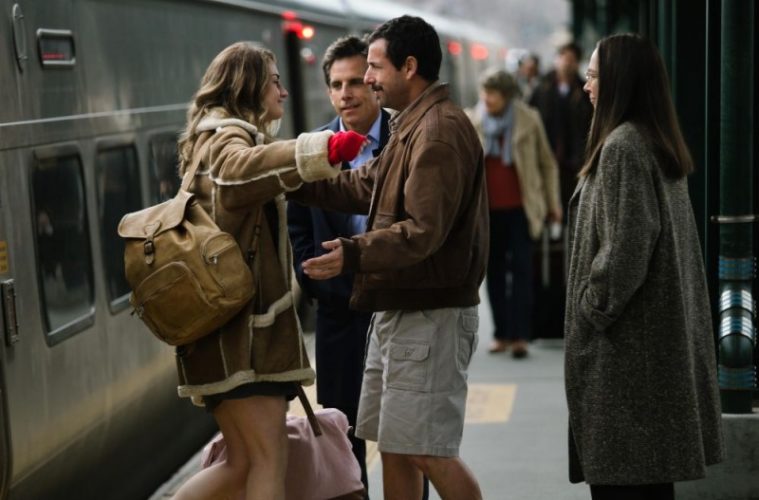 Adam Sandler has acted in nearly 50 feature films, the majority of which he’s played the lead. It won’t come as any great surprise to learn that The Meyerowitz Stories (New and Selected) is amongst the best works of his career, comfortably scaling the lower denominators to reach those sparse upper peaks. Director Noah Baumbach draws from the 51-year-old’s main talents as both comedic songwriter (as in his early standup and his time at SNL) and ticking time bomb (his signature switch from toddler-voiced timidity to raging lunatic that Paul Thomas Anderson harnessed so effectively in Punch Drunk Love).

Meyerowitz is a lesser film than that PTA masterpiece, more a scattered selection of parts than any kind of convincing whole (a fact that the cumbersome title in no way excuses). It does, however, have the welcome casual feel of a mid-career Woody Allen New York-set picture — all starry ensemble casting, artistic discourse, tastily decorated apartments, and failed romance — captured in the pastel-deifying camerawork of Robbie Ryan (American Honey, Slow West).

The first such pastel to dominate Ryan’s lens is the pink sweater of Eliza (Grace Van Patten) in the opening frames. She’s sitting shotgun as her father Danny (Sandler), the subject of the first title card — Baumbach will later give similar billing to his half-brother Matt (Ben Stiller) and sister Jean (Elizabeth Marvel) — attempts to park the car. Having split with his wife after Eliza left for college, studying film in Bard, he’s come to stay with his dad Harold (Dustin Hoffman, holding court) and Harold’s third wife Maureen (Emma Thompson). Danny is the beta male to his younger half-brother Matthew, a property guy of some description from Harold’s second marriage. The root of the various disparities between the brothers (that of wealth, ambition, and self belief) is the chief concern of the film.

An interesting plot point of Baumbach’s recent While We’re Young was that Ben Stiller and Naomi Watts’ middle-aged couple did not have any kids (although not for lack of trying). Has the great examiner of prolonged adolescence (now comfortably into fatherhood himself) finally come to terms with middle age? Whatever the case, and contrary to recent outings, Meyerowitz is a work with parenting very much on the mind.

Danny and Jean (both portrayed as likable but rather lost human beings by Sandler and Marvel, respectively) feel that they were denied adequate love from their father after Matthew was born. Harold, a moderately successful sculptor by trade, seems disappointed that none of his children became artists, while at the same time apparently favoring Matthew (although Matt doesn’t seem to know it) despite the fact that he’s the least creative of the lot. Meanwhile, Danny has to brave the reality of Eliza’s move to college and try his best to support her burgeoning — and humorously transgressive and provocative — filmmaking career. Baumbach even reverses the roles at one point, having Eliza console her father before she goes out to a party, offering to keep her phone on her in case he needs to chat. The imminent loss of this relationship with Eliza (as he knows it) should act as another link severed to his younger self, but he’s once again single and unemployed and back living in his father’s house. The staving off of adulthood, an essential Baumbach theme.

Meyerowitz reverts somewhat to type when Harold is later hospitalized, with the disparate siblings forced to air out their grievances or put them to one side. You know the drill, but nevertheless, in this middle third things also finally click. Stiller and Sandler strike a warm and believably awkward brotherly connection, hitting some real on screen highs as they sit around the piano with Marvel singing Sandler’s catchy tunes. It almost feels like a superhero cross-over movie to see these two true veterans of their recent shared era duking it out, quite literally. Most welcome, surely, is that off the ivories Sandler comes across remarkably well as a sort of bumbling, less Italian John Turturro, all self-deprecating mumbles and gruff empathetic New York wit. We would be foolish to hope, but a little more of this side of Sandler would go a long way.

The Meyerowitz Stories (New & Selected) premiered at the Cannes Film Festival will be released this fall on Netflix. See our coverage below.