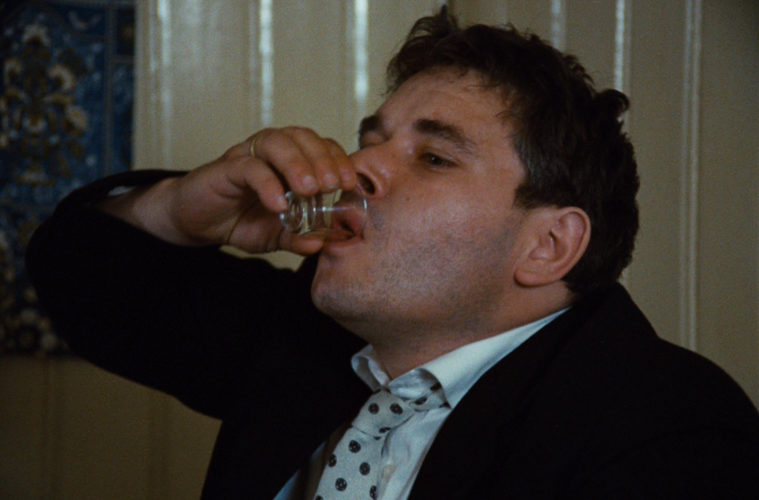 ‘The Merchant of Four Seasons’ and ‘Make Way for Tomorrow’ Hit Criterion: The Melodies of Marriage

As long as there has been art, there have been tales of love. Or mostly stories of love gone wrong. Cinema’s obsession with physical intimacy, all the way back Edison’s kiss, has made it a fitting medium for examining the trials and tribulations of only love, but also the institution of marriage. Only second to the will-they-won’t-they is the will-they-stay-together, as its ability to fly time by while carrying the weight of years is practically built into the form. Marriage’s follies have inspired many of film’s great comedies, as Stanley Cavell has elucidated, but truly many of its best melodramas. However, each story carries a different melody; the rhythms of each story define our reaction to the couple at the center of them. Two recent Criterion releases are thus worthy of comparison in this respect: Rainer Werner Fassbinder’s The Merchant of Four Seasons and Leo McCarey’s Make Way for Tomorrow. Only one could make a stone cry, but how and why we react to each is essential to our reading of each’s melody.

One could say that Fassbinder’s goal is crocodile tears. This 1971 feature was the first to win him international acclaim and success, and his first inspired by the American work of another melodramatist, Douglas Sirk. But what can we say is Sirkian about this tale of a marriage gone sour? A former French legionary, Hans Epp (Hans Hirschmüller), returns and takes on the lowly work of a fruit seller, while his wife, Irmgard (the great Irm Hermann), aids him. If there is any love, it is doubly disguised through their Brechtian performances, reducing delivery to brute and blunt directness.

This is not to say, however, that it is a film without emotion. Even more than other works by Fassbinder, The Merchant of Four Seasons is brimming with emotional releases: the cruelty held within the bright-lipped smiles of Han’s sister (Hanna Schygulla), the passionate exchanged gazes of his former lover from her high window, and the way the family leaps in fear when Hans comes at one point to “reclaim” his wife. Fassbinder’s distanced perspective, presumed by many as a “distaste” for his characters (when did one need to love their characters to be empathetic toward them?), is in full force here, often through the shocking edits he employs. When Irmgard talks briefly to a man on the street attempting to pick her up, Fassbinder cuts directly to her spread nude in front of us, like a Bernini statue in the ecstasy of orgasm. The moment contrasts sharply with when Hans returns home one night and beats her for no reason. As shot in a single long take, we see Irmgard’s hands and legs stretched in pain as she screams for him to stop. The image is awkward — not putting us in a place where we really can see what is going on — and thus, also authentic.

Fassbinder is an artist of artifice. His tale is set in the 1950s, but clearly uses cars from the 1970s, for example. A flashback to Morocco near the film’s end is so wildly unreal it feels better suited to a Pasolini movie. But the truth of a Fassbinder film is different from that of his Italian counterpart; the pains of emotion are at the vortex, and the straining to keep happiness alive in a society that feels rigged against Hans is what drives Fassbinder to work with staccato rhythms. Fassbinder’s pointedly telling camera movements — such as two symmetrical pans left and right during a crucial family dinner near the end — expose a type of theatrical stasis to his stifling universe. But, most importantly, Fassbinder exposes the emotions as real, what Thomas Elsaesser, writing in the Criterion essay, calls “the faux-naive sincerity beyond irony,” turning these rhythms into something that makes Han’s final suicidal gesture both comic and intensely upsetting. The numerous whiskey shots for each wrong in his life suddenly jolts us to the past — to real pain, and real remembrance, even though it is the fakest scene in the movie. And, with one final line, we see the process begin once again.

The Merchant of Four Seasons manages to create a paradoxical relationship with its emotions. Make Way for Tomorrow registers in something that could only be described as “bittersweet,” which is to say it holds the same principle as Fassbinder, but it never asks us to divide our emotions. This is not to say that Make Way for Tomorrow is a lesser film; few would argue against the fact that it remains one of the most tragic, affecting films in the medium’s history. But understanding how the film gets every viewer to somehow burst into tears (including this one) is part of understanding its magic.

The setup is simple: Barkley and Lucy Cooper (Victor Moore and Beullah Bondi, sublime) have lived a full life together over fifty years of marriage, but their money has dried up and their home taken away. Their five children want to support them, but only two are willing to help at the bare minimum, housing one each… 300 miles apart. Visiting is barely an option, and phone calls are expensive. And, of course, Barkley and Lucy become ostensible threats to their children’s usual rhythms of life, if only by accidental, mostly harmless ways they’ve adjusted to their lives. (If the story sounds familiar, it has served as the basis for both Ozu’s Tokyo Story and Ira Sachs‘ recent hit Love Is Strange.)

McCarey, a born-and-bred-in-Hollywood man, could not be more different in style from Fassbinder’s model of Sirk. His camera is kept to simple, unshowy compositions, and he employs few camera movements. He’ll often keep characters equal in the frame in evenly designed two shots (though never symmetrically so). If he cuts in between people in conversation, he won’t necessarily rush it on natural drama beats, matching the tempos of the elderly lives. The music is often kept to a minimum — yes a feel pulls on violin strings, but the chords rarely reach beyond a mezzo-piano. For Sirk, it was creating a overwhelming slate of emotions. For McCarey, whose often made screwball comedies (e.g. The Awful Truth, The Ruggles of Red Gap, and Once Upon a Honeymoon), it was allowing the rhythms of life to often speak for themselves. His actors often move in different registers (literally: watch young granddaughter Rhoda dance while Lucy sits calmly in her chair) and actions are never met with direct malice. (Only a single subplot involving Barkley’s daughter rings with an air of plotting in her somewhat single-minded characterization.)

But Make Way for Tomorrow would be nothing without its truly monumental third act, a blissful passage where Barkley and Lucy are allowed to relive their honeymoon in New York, knowing the hours they spend together are likely to be the last during which they’ll ever see each other. Moment after moment, McCarey erases plotting, creating a series of harmless incidents that only those with years of shared experience could savor. A ride through Manhattan, a pair of cocktails, a final waltz. McCarey never lets us forget the doom that sits just around the corner — the cuts back to the children keep us just slightly unbalanced — but his sequences are lovely in the way they speak the language of their characters. There is a delightful small tracking shot that goes back and forth as the two spy a woman taking a nip, and their private delight in something rather mundane is filmed without pretensions, rather sharing in their astonishment of the new at such an old age.

And so the film then crescendos without ever once raising its voice. As Robin Wood notes, “The underlying, unstressed irony of these last sequences is by now clear: it is because of the hopelessness of their situation that the couple are able to rediscover this intimacy from their premarital days.” Make Way for Tomorrow climaxes with a simple exchange, but one brimming with the entire spectrum of emotions. Its almost genteel series of words and exchange are one not of grand gesture, but of the simple reminder that a life fulfilled deserves its acknowledgements, too. The melody carries off as the train moves along, and one last turn suggests a grand, impossible strength in simply carrying on. It is only there that cinema could show a power of love that no other medium could ever imagine.

The Merchant of Four Seasons and Make Way for Tomorrow are now available through The Criterion Collection.