“The Mask Hides My Ugliness:” Violence and Trauma in Rob Zombie’s ‘Halloween’ 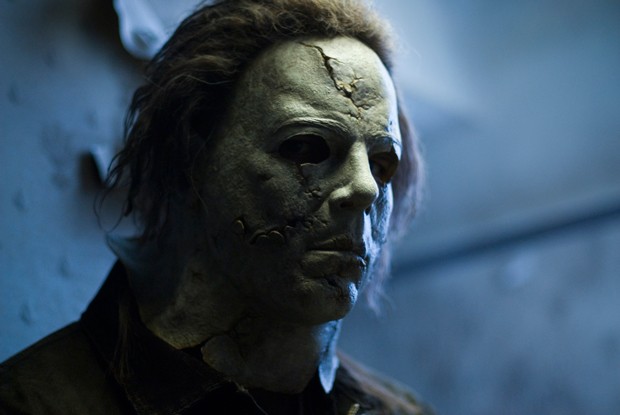 In 2007, Rob Zombie, for his third feature, took on a beloved horror franchise — helmed at its inception by genre maestro John Carpenter — and dug his grime-coated nails into Halloween with tenacity. Insistent on finding reason behind a remake, Zombie chose to devote the film’s first half to the darkly formative years of horror icon Michael Myers. The faceless killer stalking high school students now has a human visage, bespeckled with familial abuse and an already-burgeoning inclination toward violence. With this backdrop, Zombie planted a seed of specificity in the soil of the franchise, its roots digging deeper than ever before towards the heart of darkness. What blossomed is a brutal and subversive study of trauma and toxic familial ties, one as morally dense as it is utterly human.

Fitting neatly into Zombie’s oeuvre, Halloween makes you look ugly right in the face. Not just the rugged, sweaty faces of damaged and sadistic people, but the rotten within, peeled back to tendon and tissue. In this world, characters are forced to bear their souls, showing glimpses of humanity as life is drained from their bodies. A school bully becomes a cowering, sympathetic child as he is beaten, his menace quickly dissolving into terror. This creates a fascinating dichotomy alternately savage and gentle. Zombie forces us to confront violence — and more importantly, the results of violence — directly. When it is unleashed, it is barbarous and ugly, a feat that many horror films fail to achieve. These scenes do not feel tasteful because they are raw and disgusting, stripped of flash and fun.

And in this rawness, a humanity shines through. Zombie is not wallowing in violence for pleasure, but because the unyielding stare robs the act of its glorification, silencing cheers for the masked psychotic who murders. Zombie’s eye is more sympathetic on victims — an almost gentle, grasping understanding as they depart — than many in the genre. He focuses on the faces of the wounded and terrified, but not in an austere or callus manner. Instead, the camera, with all its momentum, turns their trauma into a visceral sensation for the audience as it shakes and shudders with the fear, pain, and confusion of those it studies. This is the external trauma dealt with in Halloween, but not the only kind that fascinates Zombie.

The two central victims of deep, emotional trauma — Michael (Tyler Mane) and Laurie (Scout Taylor-Compton) — are at different stages of the process. Michael is completely enveloped in his, and Laurie’s is about to arise. Michael and, as a baby, Laurie grew up in a household where domestic abuse serves as breakfast conversation. Michael used his mask as a safety blanket, a form of coping he later, if only momentarily, sheds when he kills his step-father, removing the mask to stare into his victim’s eyes. This action allows Laurie to temporarily escape the Myers name once she’s adopted as a baby by the Strodes. Once inside the asylum, Michael starts to recede into his own head, reverting back to the safety of the mask for good. After his mother (Sheri Moon Zombie) commits suicide and his psychiatrist (Malcolm McDowell) abandons care over him, Michael detaches completely. Inside the psychosis that is born, Michael develops a deep, innate impulse to find his baby sister. So he sets out to find her. This first half contextualizes Michael without overstating his motivations or urges: he is still partially obscured by mystique, but this is coated in understanding.

As Halloween reaches its second half, there is a looming sense of fate that cannot be shaken. At first, this may feel like remake syndrome, a refashioning of old clothes. Yet as Michael slowly and pointedly stalks his victims, dismantling the familial infrastructure around Laurie so the estranged siblings can reunite, this notion falls into a deeper subtext. In his last hour, Zombie is consciously grappling with Carpenter’s original film. Yet equipped with the emotional foundation of its first hour, Halloween’s proceedings and Zombie’s wrestling fit into the themes of Laurie’s inevitable trauma and the deep neurosis of Michael, adding a newfound depth to the franchise.

This could be summarized by a single subversive image: a masked Michael standing near a young girl in a living room, both transfixed by the television. At first, this classic horror image feels menacing, chilling. Yet within Michael’s context, it is shifted. Captured by the flickering lights of cinema, Michael is transported to a formative time in his life, when the same film aired on Halloween. A time when he confronted his abuser and tried to make the world right for him and his mother and his baby sister – and something he then repressed. And so for a moment, he is lost in childhood daydreaming, in revere. Unfortunately, his bastardized sense of morality remains vile in our eyes — and Zombie understands this. Within this canvas, he favors emotionally dense images instead of jump-scares, creating terror and sympathy with a single stroke.

During the sustained sequence of tension and terror that serves as the climax, Laurie takes refuge from Michael among the support beams in the ceiling of their childhood home, and thus Michael smashes the ceiling to a pulp. The revered heights of Carpenter’s classic do not frighten Zombie. He is set on tearing the ceiling down and dismantling the concept of a mythic and faceless killer with no tragic circumstances. We have seen Michael abused — by his stepfather, by bullies at school — and we’ve watched him become alienated by — and, in turn, alienate — the few people in his life where a mutual foundation of care could be fostered. Now the connection to his estranged baby sister is crumbling around him, by his own hands. It is a moment he has waited years to actualize, but through his own twisted sense of morality and brutal methods, he has butchered it. He has failed to bring Laurie into the fold, failed to communicate to her the familial strands they share, so he destroys. But in the end, Laurie puts a revolver to Michael’s head and pulls the trigger, sobbing and screaming as waves of terror already chip away to trauma and adrenaline seeps into confusion. In her eyes, she was forced to kill — because there was no choice. Laurie Strode is now a Myers.