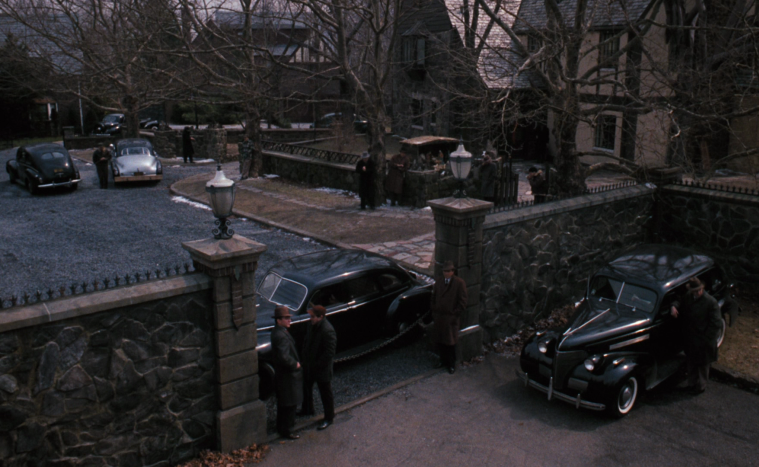 Have $2.89 million? You could own the mansion from The Godfather, NY Post reports.

At Cut Print Film, Josh Oakley on the cruel parade of time in Boyhood and Interstellar:

Two images, both completely different and yet one in the same. The first: a son, readying to depart for college, stands across the room from his mother, her head on the table, weeping. The second: a middle-aged man aboard a spacecraft, holding the hand of his elderly daughter. The former is from Boyhood, Richard Linklater’s quiet, gorgeous exploration of the process of aging. The latter is from Interstellar, Christopher Nolan’s space mammoth, capturing the human capacity for ambition. Though both films are distinct and unique, they have a surprising amount in common (beyond both being among my favorites of the year). Both are around three hours long. Both are epics, capturing an immense scope of human experience. And, most importantly, both are dependent on the power of time, and how it fractures relationships between parents and their children.

At Badass Digest, Britt Hayes on the loneliness of Magnolia:

Paul Thomas Anderson’s Magnolia opens with a series of gruesome coincidences which serve as a gateway or a primer for his poetic narrative about the human condition. The film doesn’t ask us to believe in coincidences, for they do exist. All it takes is that one moment, that chance encounter, being in that exact place at that exact time. Right and wrong do not matter; these are simply a matter of perspective upon reflection. If so much of our lives can be determined by a single moment in the past, then so much of our future can be determined by the recognition of an opportunity in a chance encounter, the recognition of that coincidence, and the faith in the allowance of intervention.

At The Talkhouse, Ti West on The Homesman:

The Homesman is the type of American filmmaking we should be celebrating. Filmmaking that does not conform to current trends. Filmmaking that focuses firmly on the story and the characters it represents, and does not attempt to make extra appeals to its audience. Respectfully, Tommy Lee Jones is not looking for an easier way to tell a difficult story. For better or worse, these are the people, places and situations this film is about — and the audience can deal with that as they see fit. This is traditional moviemaking, where cinema is art, and where deliberate storytelling is the most important. As Lars von Trier once controversially said, “You (the audience) are all my guests, it’s not the other way around.”