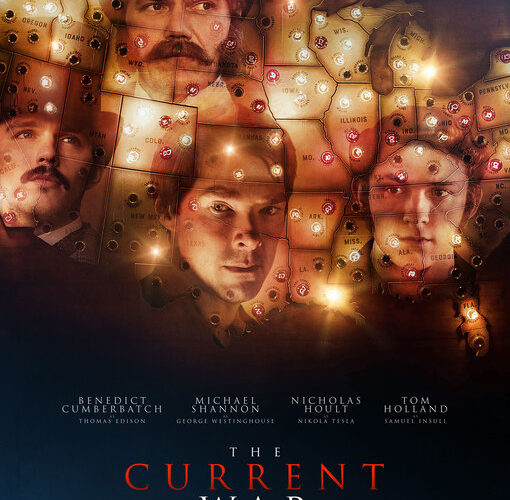 A casualty of Harvey Weinstein’s downfall, Alfonso Gomez-Rejon’s thought-to-be awards-contender that was rushed for a lukewarm TIFF reception in 2017 finally sees the light of day. Retitled The Current War: Director’s Cut due to the director’s extensive revisions (thanks to producer Martin Scorsese’s contractual ability to block the other version’s release), the film remains narratively identical with effective pacing tweaks that fix some of what gave me pause two years ago. The most noticeable change is the slight increase in screen-time for Nicholas Hoult’s Tesla to help provide the character his deserved due alongside the two leads (Benedict Cumberbatch’s Edison and Michael Shannon’s Westinghouse).

I liked the film with reservations back then and enjoyed it a bit more now. Hardly a different film (I stand by my original review, reposted below), it exists as a stronger variant of what already was. Whether that’s enough to win over its detractors remains to be seen, but the fact this improvement was made possible at all proves a victory for artistic integrity. The title is The Current War, but it’s subject is truly more history than battle. It’s flashier to think about our modern day electrical system as a conflict between two geniuses fighting for their vision’s victory, but the truth is more complex. Michael Mitnick’s script understands this (mostly) despite the title representing it. The way he documents the personal, professional, and public struggles experienced isn’t as much about letting the audience choose a winner as it is to represent facts for posterity’s sake. Whether the Chicago World Fair picked Thomas Edison’s (Benedict Cumberbatch) direct current (DC) or George Westinghouse’s (Michael Shannon) alternating current (AC) is moot when compared to the result. In the end no one truly lost this “war” because the world at-large ultimately won it together.

If Alfonso Gomez-Rejon’s film depicts any “versus” scenario it’s in the abstract. We’re talking science against ego for the good of mankind. Edison may have built his inventions to advance the species, but such altruism is rendered false when also craving fame. One could call him a brand above hero—something detractors of his historical status have sought to teach. They’ll be happy to know this film does no favors as far as defense. He’s portrayed as a visionary blinded by the celebrity he so readily absorbs. Where his light bulb was genius and his harnessing electricity profound, his work merely scratched the surface of what was possible. While he attempted to perfect his system, he blatantly ignored a better one. And he created fear to reason why.

He’s the showman, Westinghouse the humble servant who struck it rich and stayed modest. Edison motivated with fear; Westinghouse love. This is a crucial distinction Mitnick takes pains to highlight, perhaps at the detriment of a script beholden to such repetitive encounters aspiring towards evolving drama. George sees Thomas’ achievement and understands how to improve it. And rather than create a competitive company, he seeks partnership. If his way is better and Edison agrees to help solve AC’s problem powering more than light (DC already did), they could perfect a shared vision. It’s an olive branch a wealthy man can present to one that must consider the financial loss of starting over. Perhaps the competition spawned by Edison’s refusal was the only reason progress was eventually found. What follows are the successes and failures by both men in a race to power the country. Edison does see it as a war while Westinghouse an obstacle towards a better future. The former begins to slander the latter by talking about AC’s electrocution (a word not yet invented, allowing for one of Thomas’ verbal jabs) potential despite ignoring how DC would do the same at the same level. The latter continues to try and meet the former to talk like adults and put aside differences (logically- or emotionally-motivated) to provide America what it deserves. We watch Edison bulbs on a giant map illuminate each city (yellow for Thomas, red for George) as contracts are signed. And we learn how electricity was always much bigger than two men.

This is where Mitnick’s script excels beyond biography and onto historical documentation. He leaves Edison and Westinghouse behind to follow the journey of young Nikola Tesla (Nicholas Hoult); the birth of the electric chair in Buffalo, NY; and the entrepreneurial pursuits of J.P. Morgan (Matthew Macfadyen) proving him more than merely Thomas’ benefactor. Everyone’s a cog in electricity’s story, each (save Tesla) drawn to it from other pursuits that may have supplied even more interest. The concepts of light, machinery, infrastructure, and capital punishment all converge synergistically in the late-1800s to deliver this captivating tale of ingenuity and technological advancement. And in this way The Current War is a film about American imagination in a free market driven by progress. Our modern electrical grid’s evolution is actually exciting.

So it’s unfortunate when things move too far into the backstories of the two men at the top. It’s not that either was handled poorly or proved unsuccessful in letting us emotionally invest in them. I simply question their relevance to electricity. Edison faces personal tragedy—but he was withdrawn and egomaniacal before it. Westinghouse finds himself desperate with back against the wall—but do we need a Civil War flashback to accept his being able to survive? We never receive the same level of devotion to Tesla’s origins (brief shots of his OCD, poverty, and billiards prowess aren’t as in-depth or meaningful) despite his role in the tale confirming he was just as important (if not more). This is what happens when a studio holds star power above ideas. I can see it: a project about the chaotic turmoil surrounding electricity’s take over of the world being second-guessed for not being “sexy” enough of a topic. It’s decided that Thomas Edison must be highlighted because of name recognition, but is he even enough to prop up an entire film when he’s only a small part himself? The search begins for an equal in vision but adversary in tone. Westinghouse is chosen because his motivations are truly pure. He can be the protagonist with Edison turning anti-hero. Tesla the eccentric arrives to come and go while adding color (he does get involved in both men’s careers after all) and their wives can be included as two-dimensional support vessels. Inventors at war sells better than the birth of invention.

But they aren’t as interesting. So every time we sink our teeth into the latest hiccup pitting DC against AC for American supremacy (the film does well to explain why this is such a huge deal), we find ourselves wallowing in Edison’s sorrow and Westinghouse’s frustration. Instead of showcasing Tesla as he creates the missing piece to their work and letting the film be a three-headed monster (despite ample time provided to the creation of theirs), we’re given the origins of the movie camera with melancholic angst. Adventure becomes stalled for overwrought melodrama and you feel it every time. What could be said with one line of dialogue is endured for five minutes because “actor showcase.” It begs the question whether this story was better suited to documentary.

Until one arrives, however, Gomez-Rejon’s docudrama will have to suffice. And it’s not like the film isn’t without merit: Cumberbatch is very good, Hoult is fun, and Shannon rises above them all with his Boy Scout charm hiding beneath a pensive, straight-back demeanor. I enjoyed the visual style too (save two opening shots with the camera swooping as though a bird indoors and the constant decision for two shots to put one actor off the left edge and the other off the right with three-quarters of an empty screen between). The transitional aesthetic has an energy that moves us from mansion to workshop to Buffalo police station as though on electricity’s current. Despite the filmmakers investing so much time in unnecessary biopic exposition, the whole is an exciting and informative history lesson.