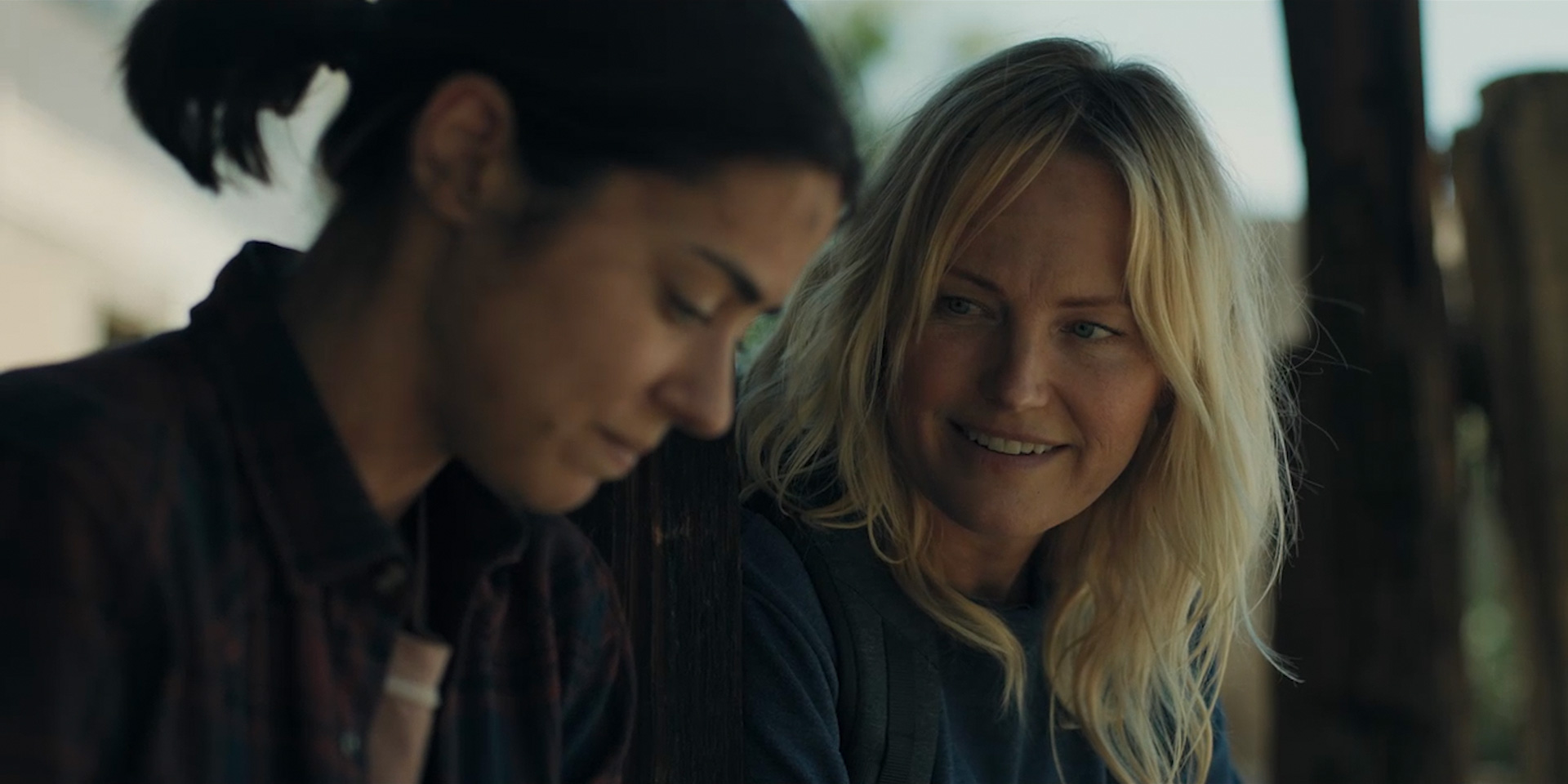 Freedom is an escape from society’s invisible cages. Thus Seth (Chris Messina) teaches his followers at The Aviary to emancipate themselves from those walls. He serves as their quasi-psychoanalyst conducting what he’s coined “barrier therapy” (or BT), allowing them to open themselves to what they truly want outside of the norms civilization feeds them. And they love him for it. They embrace his teachings and enjoy his hugs while walking lockstep into the New Mexican desert to inhabit his new, fully immersive BT barracks. Outsiders might say Seth is merely leading them from one prison to another, preying upon their weaknesses to interject himself as their God. To hear Jillian (Malin Akerman) and Blair (Lorenza Izzo) talk is to realize those outsiders are correct.

The two have escaped his clutches this time, their awakening arriving courtesy of revelations they could no longer silently live with. Blair was there shorter than Jillian, but her connection to Seth was intimate and just as strong. The latter actually recruited her to join their community, telling her that the sessions would change her life. So when Jillian makes light of the fact they are running through the desert from a cult, Blair takes offense. To her it was simply where her therapist lived and soon—once a romantic relationship began—where she lived as well. It’s a coping mechanism, considering her decision to flee was predicated on finding out every young woman in the compound was romantically linked to Seth, but no less valid.

Jillian initiated their jailbreak because of what she did in his name. Acting as an engineer (for what we glean are the types of therapy performed, whether BT or a mysterious new program labeled “synergy”), her ability to get closer to Seth was through performance rather than sex. Her drive to rise higher went so deep that she ultimately betrayed her best friend and mentor (Sandrine Holt’s Delilah) in order to steal her position as his right-hand woman. The guilt has been eating away at her and Seth’s gradual descent into possessiveness and paranoia has led her to acknowledge her role in his oppression. So, Jillian grabs food, water, and a map before leading Blair outside the Aviary’s borders to head towards the nearest town’s salvation.

It’s a taut premise concocted during the COVID shutdown by writer-directors Chris Cullari and Jennifer Raite. That one comes from a strict Catholic upbringing and the other a New Age obsessive only allows them to delve into the psychological torment that we so easily fall prey to in a world that has become overrun with tribalism devoid of nuance. As such, their script never condemns its leads by treating them as though they should have known better. Whether they should have or not, it doesn’t excuse what Seth has been doing to them. That Jillian and Blair could even attempt to leave says so much more about their fortitude than any amount of brainwashed indoctrination could. That strength is what can save them if they sever his hold.

Doing so won’t be simple. Physical escape is not the same as mental escape and, as we soon discover, the latter has barely begun. Because while they say they want out, something is pulling them back with every step forward. The map seems to have misrepresented how far their oasis is, turning a two-day hike into three or more. Their joyous relief in no longer being recorded and tested only lasts so long before fear sets in to turn every sound into potential capture. It’s when they fall asleep, though, that their autonomy is officially questioned. One starts sleepwalking herself into peril while hallucinating dead bodies. The other holds conversations with Seth as though his voice lives inside her brain. Perhaps it does too—figuratively and literally.

The filmmakers flirt with sci-fi conceits in this capacity, hinting that “synergy” could be some game-changing technological breakthrough leading to memory manipulation and / or telekinetic bonding. That would explain why they seem to be going around in circles despite always following the sun. So too would cognitive decline, though—either by dehydration and starvation or withdrawal from the “safety” of their place by Seth’s side. The further they travel, the greater the risk of complete psychotic break. Hallucinations become harder to shake, paranoia drives a wedge between them, and we must begin wondering whether both are even real. Who’s to say the fracture didn’t occur long ago to create two personas? Who’s to say they aren’t laying in Seth’s office right now, imagining everything at his behest?

That’s the appeal of films like The Aviary—the not knowing until the end or, even better, never truly finding out at all. This duplicity ultimately becomes enhanced by smaller budgets; it forces the filmmakers to find visually inventive ways with which to tell their story. We get camera pans where a not-there Seth suddenly replaces one woman and then the next as they begin to lose their bearings. Dreams merge with flashbacks and visions with reality until we cannot know for sure what onscreen is real or not until the consequences of that blurred line are learned in the aftermath. The whole therefore lives or dies by Akerman and Izzo’s performances and, in my mind, they carry that weight with an effectively captivating intensity.

I wouldn’t say Cullari and Raite necessarily give us anything we haven’t already experienced with the genre or themes, but they utilize them with deft hands to keep us invested in the characters and, by extension, the mystery connecting them. And by leaning into the ambiguity of the scenario they can provide a climax that’s simultaneously satisfying (insofar as supplying us a concrete answer) and alluring in its ability to render that foundation fluid enough to recognize any answer remains forever incomplete. Because everything that happens can happen, regardless of whether it unfolds via reality or imagination. One isn’t any less “real” than the other—at least not for the people involved. Maybe it’s a test. Or maybe it’s manipulation. Either way, freedom proves an illusory aim.

The Aviary opens in limited release and Digital HD/VOD on April 29.