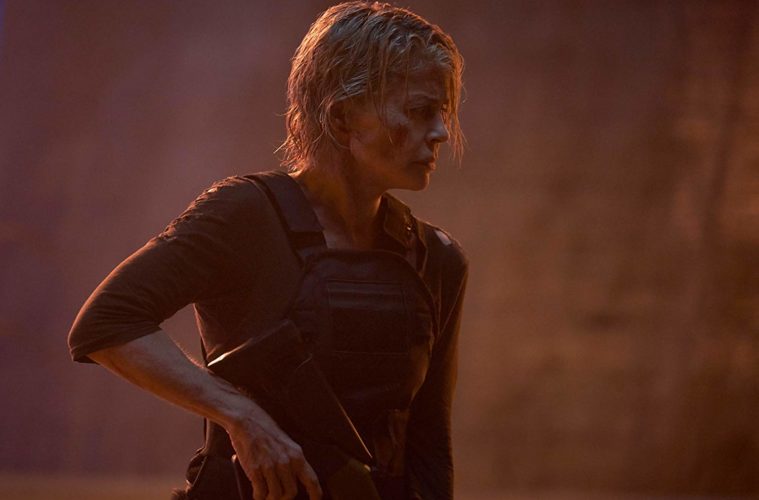 Time and Terminators make fools of us all. Much like the cold-blooded killers that have inhabited it, the sci-fi action franchise seems hellbent in its refusal to die. At six films in–across four studios and five filmmakers–few other film series have been able to sustain such longevity despite a seemingly exponential growth in disapproval. Every few years, a new model reemerges with a subsequent dismay from even the most ardent of fans. With Terminator: Dark Fate, however, there looms the promise of a true fresh start: a Terminator 3 the die-hards wish they’d gotten. This installment touts the return of Linda Hamilton as Sarah Connor, and James Cameron with a story and producer credit. The latter is a curious laurel, considering Cameron had given his thumbs up on every previous entry that wasn’t his, but alas, whatever fills the seats. Once again parading an aging Arnold Schwarzenegger in front of prospective movie-goers, Terminator: Dark Fate is unsurprising in its standard fare attempts at a make good with its fanbase. Barreling forward with a back-to-basics nostalgia, the film and those behind it bear a general attitude and methodology that gives it just as much in common with 2018’s Halloween as any other Terminator. Director Tim Miller’s true surprise is that, with a little bit of introspection, and a lot of well-paced action, it kind of works.

In ditching most of the other sequels, and establishing itself as a direct follow-up to Judgment Day, Dark Fate relieves any burdensome and wonky time travel spaghetti in favor of simplicity. We’re introduced to Dani Ramos (Natalia Reyes), a young woman living south of the border, who’s taken under the care of Grace (Mackenzie Davis, in an exhilarating action performance), a mechanically enhanced human sent from the future to protect her from a Terminator “Rev 9” (Gabriel Luna), for reasons obvious, though initially unclear. It’s an all-too-familiar setup that Miller feels frankly bored by, as he uses it in a perfunctory nature to push Dark Fate where he wants it to go: back to Sarah Connor.

Not unlike other veteran actors returning to their respective pop culture sanctuaries for a victory lap (see also: Harrison Ford, Jamie Lee Curtis, Sylvester Stallone), it could be easy to write off Linda Hamilton’s reappearance here as a mere fan bait; a pandering nostalgia play. That’s certainly a fraction of it, but it’s still a generally welcome move, anchoring a tired story on a world-weary and grouchy savior, who swears and snarls her way through each scene with all the saltiness she can muster. Whatever the intention, it’s a veritable joy to see Hamilton in the role again. She fills out what Miller positions as a trifecta of strong heroines, but harbors the soul of the film. While most of the runtime is spent plotting to position our trio in a string of action set pieces, Miller takes one or two to tease us with some of the most meditative moments in any Terminator film. Without delving deep into spoilers, Dark Fate dangles nuggets of interesting notions, using both Hamilton and Schwarzenegger to ruminate on purpose amid apocalyptic stakes, and what the future means for a killing machine who has finished killing.

While certainly not uninteresting, these moments don’t prove potent enough for the film to achieve the magnitude of emotional catharsis it seems to want to give its fans. Though smart enough to finally shift gears away from John Connor’s obvious Christ allegory (something Dark Fate takes some winking, but labored jabs at), Miller paints himself into another corner with Dani and Grace, rendering Dani as something barely resembling a character.

In its lesser moments, the film places plot in service of the action, as opposed to the reverse, but if you came for some rad terminating, you’re in for a ball. Davis shines here, and if the world is kind, she could be the next great action star. Each sequence moves in percussive fashion ensuring a near-constant momentum, particularly in the final act. One of Dark Fate’s key strength is in its one-upmanship, never succumbing to “Atlanta Syndrome,” wherein the forces at play settle their conflict in a vacant lot somewhere in Georgia. There’s a progression in the way Miller lays each one out, like a well-compiled playlist of hits.

While often a lazy rehash of the first two installments, Terminator: Dark Fate nevertheless capitalizes on familiar territory as best it can, in order to casually examine the inner clockwork of its human and inhuman stars. How successful it is in clearing the admittedly low bar of being the best Terminator since Judgment Day may very well depend on one’s level of commitment to the franchise as a whole. Terminate-by-numbers it may very well be, but it’s also entertainment as durable as a T-800.