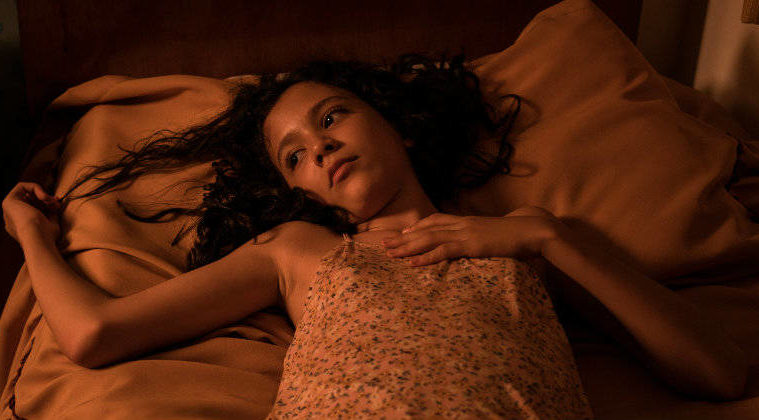 A flock of dark, wavy hair covers Ángela’s luminous face as she stares at her father’s casket a few minutes into Rubén Mendoza’s heart-wrenchingly humane Niña Errante (The Wandering Girl). Ángela (preternaturally talented Sofía Paz Jara) is twelve, her mother died at birth, and her dad just passed away in a motorcycle accident. Stranded in Cali, Colombia, with no relatives who can look after her, she attends the funeral with her three estranged and older step-sisters: Carolina (Carolina Ramírez), Paula (Lina Marcela Sánchez), and Gabriela (María Camila Mejía). They have flocked to bid farewell to a father they seldom knew, and have agreed to drive across the country to leave Ángela in the hands of an old aunt, lest she be handed to the government’s child protection agency.

Thus begins a mesmeric journey that blends the candor of Hirokazu Kore-eda’s Our Little Sister with the sensuality of Deniz Gamze Ergüven’s Mustang to conjure up its own language–one that works through silences, small gestures, oneiric visions, evasive answers, and moments of sisterly tenderness. It’s been years since the older siblings have met; as for Ángela, the faces are all new. Carolina, the eldest, is struggling with an overprotective partner and a pregnancy she may or may not interrupt; tattoo artist Paula has a history of past lovers inked on her skin; and Gabriela has only a few days left before leaving the country again to trail behind her mother, hobnobbing from one embassy to another with affluent expats while harboring a sense of existential ennui that grows stronger as the four drive through the country–a staggering 1500 km road trip from Colombia’s South West all the way to the Caribbean coast.

It’s a reunion orphaned by an almost inexpressible vulnerability and loneliness: everything from a shared joint to a toast to a lingering group hug portend an encroaching and inevitable farewell. The imploring voice with which Paula addresses the funeral attendees to call for any other unknown sibling to come forward–“it’s time we met”–echoes the searching and wanting tone with which Gabriela delivers her icebreaker once the four are alone again: “at last dad introduced us.” All the buzz and happiness around the long overdue rendezvous is tragically reined in by its expiry date: the quartet’s journey is heading straight to its own dissolution, and it is this seldom spoken truth that graces Niña Errante with an achingly melancholic vibe.

Mendoza’s parsimonious script reveals very little of the quartet’s father–leaving it up to them to patch together the portrait of a man who was either a loving father-cum-artist, or a rakish womanizer, or both–depending on whose recollections Mendoza lingers on. Still, this is a journey about mourning as much as it is about self -discovery; the relationships between the four may well pivot around the memory of a late parent, but as the trip unfurls, if not symbolically pushed offscreen altogether, the father ceases to serve as the group’s invisible centerpiece, and the focus turns inward, as the four seek to re-negotiate their mode of being in the world.

Nowhere does the shift feel more evident than in Ángela’s coming of age. Director of photography Sofia Oggioni excels at capturing the humbling immensity of Colombia’s lush countryside, but it is when the camera zeroes in on Ángela that Niña Errante reaches some of its most lyrical heights. An optical effect on a mirror splits the girl’s reflection into two–an echo of her two intertwined selves: an outer one grappling with a looming adulthood, and an inner one wrapped up in a private, dream-like universe, where JCB diggers lend themselves to impromptu dances, and a whimsical vocal score by Las Ánez elevates the journey onto a magical, fairytale dimension.

Ángela’s childhood is coming to an end; the journey finishes with the start of her puberty, and the road trip turns into an opportunity to confront her sisters about the mysteries of womanhood. Paz Jara plays out the sexual awakening as a game of searching glances and furtive, innocent touching, and that the intimacy with her sisters feel so delicate is courtesy of Mendoza’s respectful touch as much as the compelling chemistry between his youngest actress and the other cast members–a scene where the young girl slides into the bathtub next to Carolina and asks her older sister when her own breasts will grow remains one of the most touching moments from this year’s festival circuit.

In a brief exchange during the Tallinn Black Nights Film Festival–where Niña Errante world premiered to rapturous acclaim (and eventually nabbed the edition’s Grand Prix for Best Film)–Mendoza told me shooting his fourth feature film was by far one of the most enjoyable experiences behind the camera. Watching the four sisters interact on the big screen, their happiness swelling a beach in the Colombian Caribbean into something expansive and hopeful, the statement rang true. This heartwarming wonder of a film percolates with the sadness of a long goodbye between people who may never see each other again; if the final embrace feels so devastating, it is because of the ineffable authenticity the journey has conjured along the way. By the time Angela predates the end of the happy-go-lucky escapade with a poignant “I wish I could tell dad about these days,” the feeling is not just to have watched four sisters grow, but to have grown with them too.