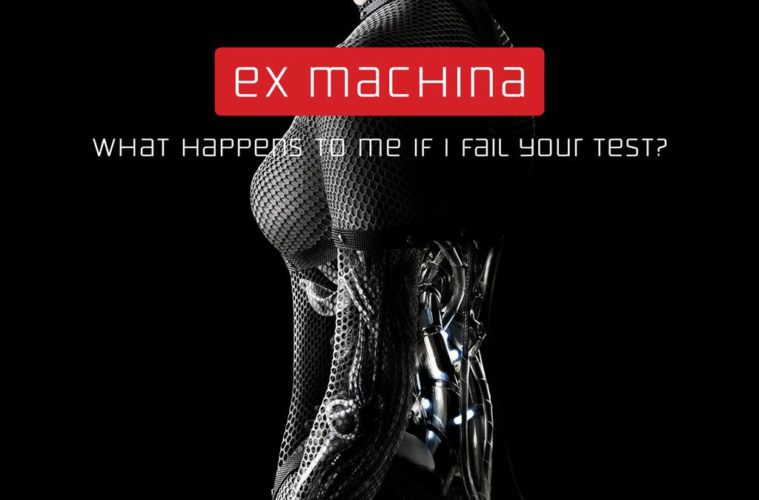 Ex Machina doesn’t want to simply be another movie in the large pantheon of science-fiction cinema, but instead builds on what has come before and distills it into a narrative that is rich and layered. With outstanding performances from Domhnall Gleeson, Oscar Isaac, and Alicia Vikander, a world of science is created that manages to blur the line without ever getting bogged down in exposition. We meet the robot, Ava (Vikander), within the first 15 minutes and we are treated to a simple plan: Caleb (Gleeson) is going to perform the Turing test, a scientific evaluation on whether artificial intelligence can convince a human that they are talking to another human through conversation. But Nathan (Isaac), a billionaire genius programmer of an online search engine, isn’t pulling any punches and wants Caleb to truly interact without the illusion that he is talking to a human. Instead, Nathan intends for Ava to truly convince him that she has a conscience and can decide things for herself. It’s a wildly ambitious goal set in a lavish high-tech, secluded compound where one gets the sense that some mysteries are left to be revealed.

Fans of genre cinema should recognize Alex Garland’s name, but this is the first time the writer behind Never Let Me Go, Sunshine, and 28 Days Later is stepping behind the camera as well, making this a feature that, in his own words, won’t be twisted or warped. It’s his vision, and he does a wonderful job of giving Gleeson and Isaac plenty of captivating moments with a strong script. In many ways, they are trapped down in the compound while Caleb performs the test on Ava and what ends up occurring is a verbal sparring match of wits. Nathan is loose and fun, while Caleb is a bit uptight. No better example can be shown than when they both quote things from books. While Caleb is always using direct quotes, Nathan paraphrases in order to more specifically tailor it to the situation which constantly draws Caleb’s ire. They both are hyper intelligent with a photographic memory, but Nathan is loose and has fun with it. There have been a number of androids in cinema and yet Garland and conceptual artist Jock manage to give Ava a distinctive look, creating the true highlight of the film. A bit more texture would have been fun to witness, as Ava is enclosed in a glass room, interacting with Caleb as a glass divider separates them, but there is an oddly alluring look to her throughout. She has skin layered over her hands, feet, and face, but everything else is robotic molding, apparent with her clear arms and legs that show the connections between the limbs. So far is the conceptualization brought to reality here that we actually get a monologue on what Ava’s “brain” is made out of: something along the lines of liquid electronics able to build and mold itself. Against the backdrop of the ultra modern compound where Nathan and Caleb are, Ava manages to look perfectly at home.

Yet as the film progresses — and each new day is announced with a title card — we get an impending sense of doom. The facility, which is Nathan’s secluded workspace for this experiment on a remote piece of land he owns in the middle of millions of acres, is plagued by sporadic power outages that cause the entire place to take on a nightmare feel and shut down to make sure nothing can get in or out. Nathan even has Caleb sign an incredibly thorough non-disclosure agreement, despite being in a secluded compound. Of course, it all makes sense as the tech he is going to reveal is a game changer. Reminiscent of Pedro Almodóvar’s The Skin I Live In, a fantastic film about the nature of sexuality and gender identity, the parallels are fascinating and there is a rich history built up in each. Nathan has various cameras throughout the facility and monitors Caleb’s interactions with Ava. He guides Caleb and wants him to try to pierce the veil of Ava’s mind. He wants Caleb to explore without inhibition as he plays mentor, when he isn’t getting stumble-down drunk.

There’s a large game of set-up and much of the film is Caleb interacting verbally with Nathan or Ava, each interaction so well-written that I was enthralled throughout. There’s a layer of what it means to be exposed to another human and given a mind and the drive to be free. We can tell that even when Ava seems to be processing her words she has a sadness underneath. As we learn the history of Ava, a darker side is explored. By the time things really start to increase in pace, we are already driven to feel a certain way. The unique aspect of the film is that it doesn’t particularly take sides in the debate of whether we should create AI or not. Instead, it seems to ask whether humans can actually keep from making this all go wrong.

A film about a robot isn’t the normal place to find a rich and thoughtful exploration of patriarchal society, gender identity, seclusion and nature versus nurture. Yet Garland and his ensemble have managed to deliver all of this within the realm of a resonant science-fiction narrative that is as brutal and honest in its observations as it is entertaining. All of that is to say that Ex Machina has both a heart and soul. Within these close quarters, there is something to chew on, observe, and explore.

Ex Machina screened at SXSW and will hit theaters on April 10th.