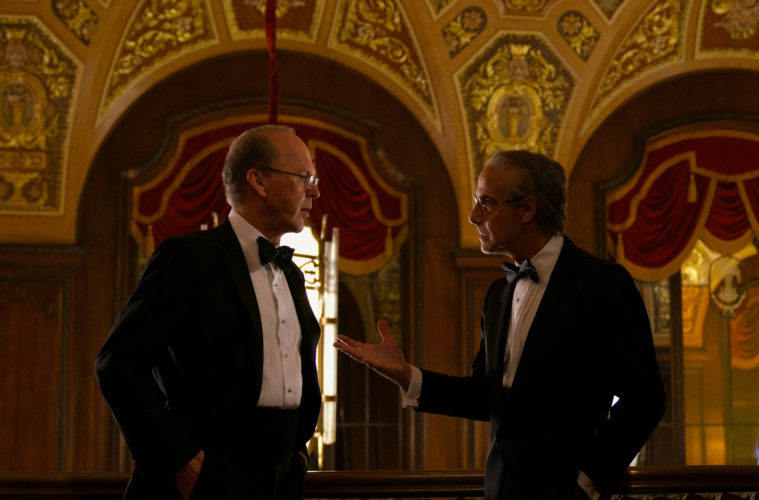 In the wake of a tragedy, who decides who gets compensated? And how much? These are the opening queries in Worth, written by Max Borenstein and directed by Sara Colangelo. Following the terror attacks of September 11th, 2001, Congress appointed attorney Kenneth Feinberg (Michael Keaton, impressive as ever) to run the September 11th Victim Compensation Fund. Along with his firm partner Camille Biros (Amy Ryan, understated), Feinberg quickly produces a formula by which to calculate what each victim’s loved ones are owed. It’s an unfair system, paying out larger sums to those who made more money when they were alive. With a deadline and a requirement to get at least eighty percent of the victims to sign (thereby agreeing not to sue the airlines), there is a ticking clock. Of sorts.

Charles Wolf (Stanley Tucci, arresting here), who lost his wife in the attacks, emerges as an opponent to Feinberg’s plan. He starts a website called Fix The Fund, forming his own coalition in an attempt to get Feinberg to adjust his formula. Feinberg also has to consider the slimy Lee Quinn (Tate Donovan), who insists the rich people who died are entitled to quite a bit more of the pie.

Watching Keaton and Tucci go at each other in a handful of scenes is worth the price of admission. Here are two of the best actors we have, doing subtle, solid work. As Feinberg and his staff attempt to get the majority of victims to sign on, they listen to their stories. Of course, these passages are emotionally affecting. Final voice messages from the towers, last-minute decisions that left one person trapped while another survived–so much heartache. As it wears on the staff, so will it wear on the viewers as a stark reminder of the catastrophic tragedy nearly twenty years ago. Actress Laura Benanti steals a few scenes as a grieving wife and mother whose firefighter husband reveals secrets from the grave that complicate who’s owed what from the fund on his behalf.

Where the film falls short is in illuminating the actual math of the fund. Despite the ticking clock device and the clear opponents of the formula, it’s never exactly clear why the decisions ultimately made couldn’t have been made far sooner. We are told more than once that Feinberg has full oversight of this process. His counter to this, in certain moments, is essentially that if they throw the formula out it will get bounced back to Congress for fresh consideration and they will miss their deadline. While this makes sense–to a degree–in the film’s narrative structure, the third act suggests there was always wiggle room to this conflict.

Colangelo is a strong director of actors, but Borenstein’s script lets her down a bit. One wonders if there was a sensitivity to breaking down dollars and cents in regards to specific victims. More than a few characters tell Feinberg a version of the phrase, “My loved one is not a statistic.” Keaton’s response to this is always measured if not a bit misleading. Of course, based on his formula, they are a statistic. His character’s journey to finally seeing them as individuals is crucial to the film, though not quite as effective as it perhaps should be.

There’s a lot of repetition from scene to scene, covering the same emotions and bureaucratic roadblocks. It’s a bit frustrating to take in as a viewer, but then it does feel true to the process being rendered. When has working with the government ever been easy, after all?

Worth premiered at Sundance Film Festival.