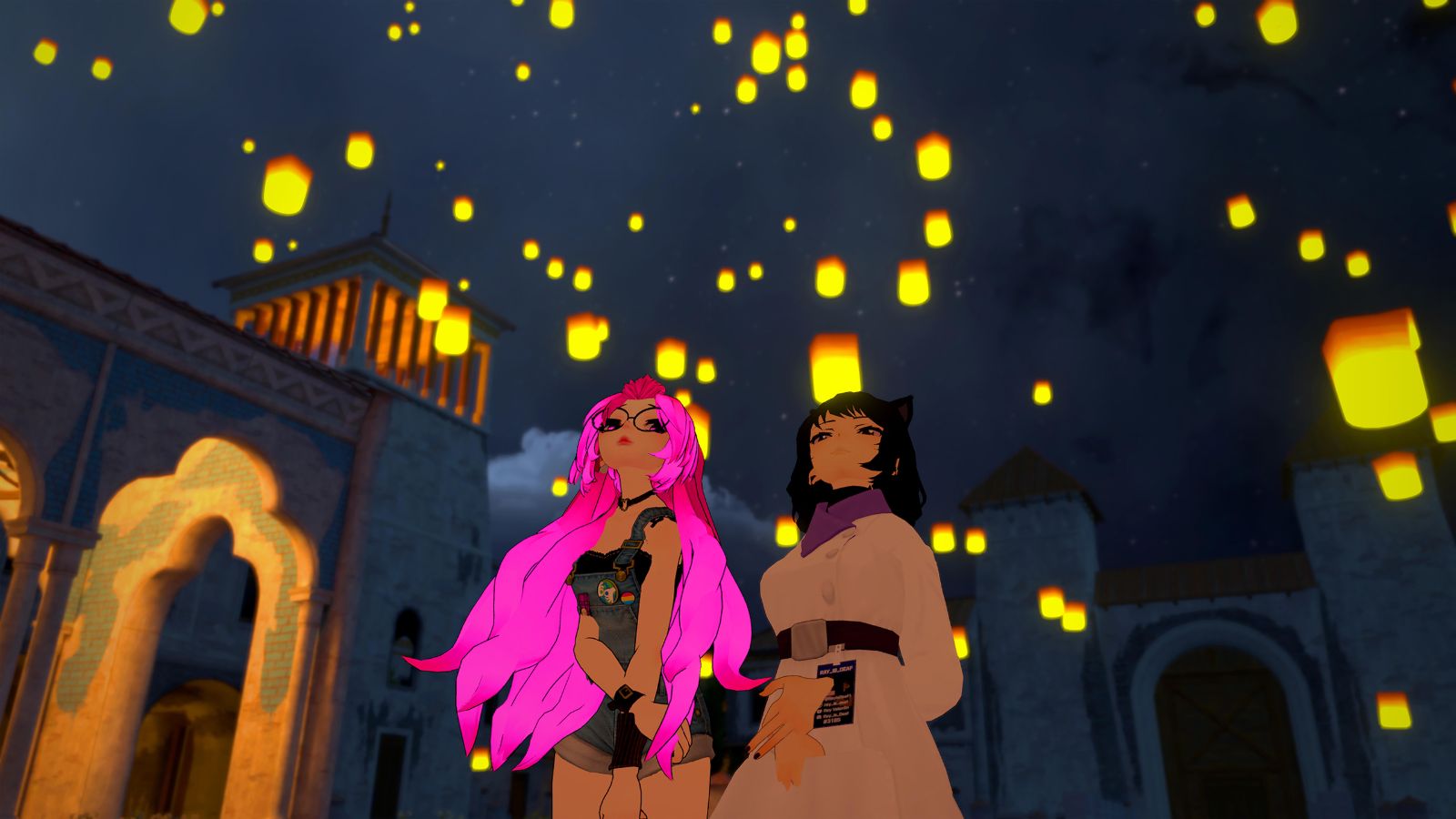 Joe Hunting has spent the last few years documenting VRChat, a social-virtual-reality platform that allows users to create their own worlds and avatars. His debut short, A Wider Screen, was just a taste of the kind of communities existing within the virtual realm, and his feature documentary We Met in Virtual Reality rather lovingly expands on that.

There’s a casualness to the way Hunting drops the viewer into VRChat, truly making one feel like a part of the scene and space from the get-go—not far removed from how Frederick Wiseman’s films hone in on the atmosphere and perspective of their subjects. In late 2020, with COVID still raging, people communed within the safety of virtual reality, creating everything from karaoke bars and amusement parks for parties to recreations of films (e.g. Jurassic Park) for users to explore. There’s sometimes an absurdity to how cartoonish avatars clash with the surprisingly realistic spaces that have been built, be it a classroom or mountain range—this is part of the documentary’s charm.

While A Wider Screen featured key moments outside VRChat to place emphasis on the distinction between one’s identity and one’s avatar, Hunting never breaks out of the virtual realm here. It’s a bold, smart choice, effectively ensuring the viewer doesn’t make judgments about who these people are outside their preferred avatar while also allowing them to experience the vastness of VR through some truly engaging montage work.

Hunting’s gaze is one of respectful voyeur; each intimate confession about virtual reality allowing people to be their true selves and find connection comes across as heartwarming rather than exploitative. There’s a beautiful sincerity to the way his subjects discuss this world they inhibit, the freedom it gives them, that’s rare in depictions of virtual reality, which is often saddled with undue negative cultural criticism. It’s in something as simple as a brief scene between users discussing what control an avatar gives them over their identity and the fluidity of representation.

We Met in Virtual Reality smartly chooses its key subjects: a collection of users who are all flourishing within this space that transcends the limitations of reality. Its two long-distance couples are a delight to watch, recalling the development of their relationships as though an extension of When Harry Met Sally’s couples interviews. DustyBunny & Toaster are as lovely a pair as DragonHeart & IsYourBoi, each bearing a unique story that nevertheless emphasizes the importance of VRChat to their relationship. It’s as romantic to listen to one couple describe their first in-person meeting ever (and hopes for a speedy reunion) as it is watching the other two prepare a virtual wedding in the face of a pandemic that has kept them apart.

Hunting doesn’t limit the film’s connections to the romantic, as his focus on Jenny and Ray shows. They, both together and apart, dive into the nuances of teaching within VRChat; their roles as American Sign Language (ASL) teachers in the “Helping Hands” community are one of the film’s highlights. Jenny and others teach over 2,000 members how to sign in five different languages, and We Met deftly shows how the digital world is as nuanced as reality for signing. Where the limitations of virtual reality are often the focus of showcases (see an embarrassing recent Metaverse video), it’s fascinating to watch how fluidly the avatars navigate each sign and how much body and hand movement is captured by the user’s mechanics (which remain unshown in the film due to the nature of remaining internal to the world).

An extended monologue about grief and personal experience, as signed and delivered by Ray during a lantern festival, is one of We Met‘s most rewarding moments—an ideal showcase of the humanity that exists behind avatars that some might dismiss due to their aesthetic presentation. Whatever glitches and oddities are present, VRChat is effectively depicted as a safe space that facilitates communication between users. It’s a space that offers users a plethora of rewarding experiences, with Hunting giving the audience a glimpse into everything from a pansexual cabaret to individuals frankly confronting the realities of their lives and learning to grow beyond them.

We Met In Virtual Reality then is a perfect showcase of how VRChat (and the Internet at large) allows users to transcend the boundaries and limitations of reality to form meaningful connections. As DustBunny & Toaster note, it’s a world where “you can be who you always wanted to be.” Hunting does it justice by highlighting all the beauty and possibility that exists within.