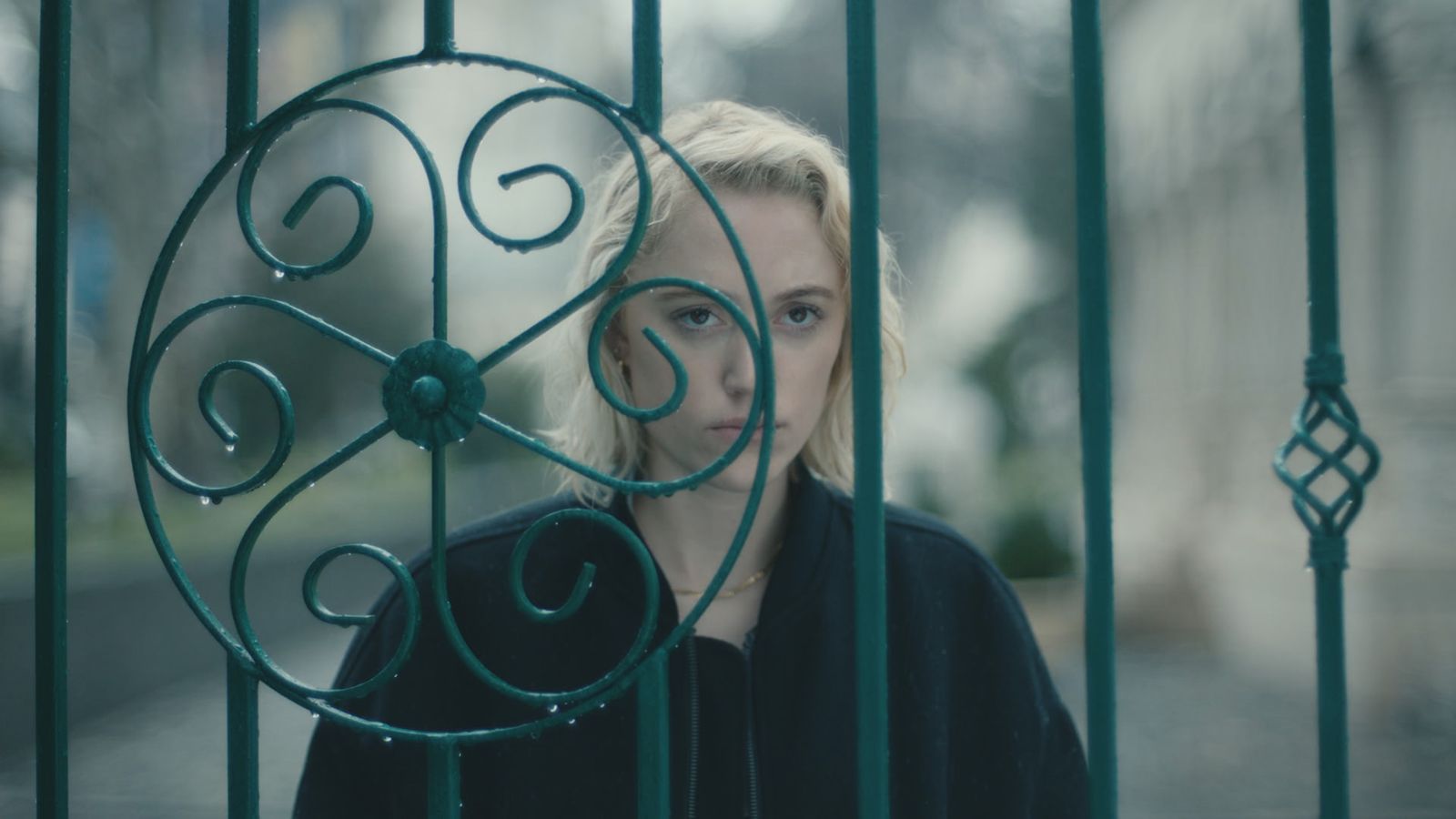 Ever since It Follows, the 2014 horror movie about a spectral grim reaper stalking a teenage girl, Maika Monroe has become her generation’s avatar of fear and paranoia. Throughout her filmography, she boasts an inner world of melancholy that begins in a delicate register and then multiplies into a feverish anguish the farther her characters tumble down their own rabbit holes. It’s the kind of psychological spiraling that gives oxygen to director Chloe Okuno’s feature debut, Watcher, a chamber piece thriller and the latest gaslighting parable to champion Monroe’s specific set of skills.

She gets to flex them right away as Julia, an ex-actress with an enviable fashion sense who has agreed to move from New York to Bucharest with her half-Romanian husband, Francis (Karl Glusman), on account of his job. In the taxi to their new apartment, he makes small talk in Romanian with the driver, who later scoffs and insults Julia’s inability to speak his native language. Francis takes offense, but then softens the translation to his wife, a kind of instinctual condescending and infantilizing reaction that Okuno and co-writer Zack Ford nudge throughout this sterile relationship abroad.

If Julia already feels alone and incommunicable in a new country, their grand apartment’s high ceilings and spacious windows only accentuate her feelings of isolation. As she observes the apartment complex across the street, she notices a shadowy, slightly luminescent figure staring in her direction, a haunting presence that she shrugs off as first-day jitters. But his cold body language begins to itch when she sees a familiar-looking man following her around the city, and then finds him back at his perch whenever she peers through the glass. Okuno has referenced Kieslowski’s Three Colors: Blue, Sofia Coppola’s Lost in Translation, and Roman Polanski’s apartment trilogy as tonal and visual inspirations, and they echo the movie’s more obvious allusions to Hitchcock and De Palma.

It’s only when Julia learns about a local serial killer, called The Spider, who has targeted young women that this stalker becomes more than just a nuisance. The news forces her to externalize the growing suspicion that this lurking figure could be after her, and she convinces Francis to get the police involved. She also makes friends with her next-door neighbor, a friendly face named Irina (Madalina Anea), who works as an erotic dancer at a nearby club and can sometimes be heard through the walls. The contrivances of the genre suggest this relationship will have some form of consequences, but Julia finds comfort in someone that believes her worries.

One of the challenges in constructing a spare movie like this is growing the level of intrigue. You need a little more than just atmosphere in a slow-burn thriller that only uses a candle’s flicker for warmth. For the most part, Okuno has enough escalations to keep you engaged, specifically in the way she slowly unveils Julia’s stalker (Burn Gorman), who evinces the look and energy of Rami Malek’s recent portrayals of menacing men. At one point, Francis hints that his wife may be the one stalking him, slowly chipping away at her already-fractured mental state. The suggestion of self-doubt crystallizes in Okuno’s framing, placing Julia in large rooms and subway stops and letting the gray void consume her.

Because Julia remains in control (there are no delusions, and erratic behavior is kept to a minimum), it’s easier to inhabit her feelings of frustration and betrayal. Which is to say, it’s easier to believe what we’re seeing, including the gaslighting that her husband keeps propagating. But Okuno isn’t interested in blasting these ideas. She’s made a smart, controlled movie of pricks and gestures and tones that accumulate into a satisfying catharsis. And perhaps validated the urge to follow your gut.