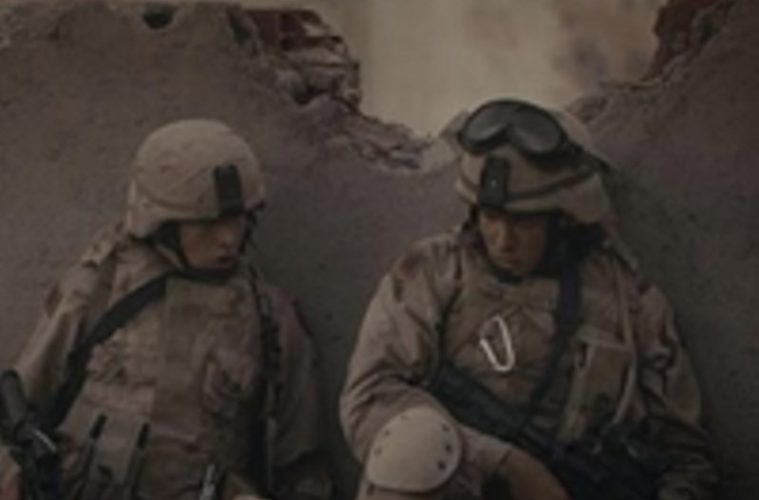 Sundance Review: ‘The Yellow Birds’ Stumbles in its Rendering of War

War, of course, is hell. We know this, but it stands that we should be reminded now and again. With The Yellow Birds, filmmaker Alexandre Moors tries to find beauty in the brutality. From a screenplay by David Lowery and R.F.I. Porto and based on the novel by Kevin Powers, the film centers on two young soldiers, Brandon Bartle (Alden Ehrenreich) and Daniel Murphy (Tye Sheridan), in the thick of the Iraq War.

Taking orders from the intense and unstable Sergeant Sterling (Jack Huston, doing a lot here, for better and worse), Bartle and Murphy become fast friends. At a family event, Murphy’s mother Maureen (Jennifer Aniston, also on as executive producer) meets Bartle and asks that he look after her son. This interaction underlines the conflict to come.

The narrative is structured around a mystery: what happened to Murphy? It’s a disjointed framework, in which we slowly learn that the young soldier’s gone missing and Maureen’s taken on a one-woman investigation following some unsatisfying updates by the military police. Engaging though this device may be, the film is driving towards a finale that disappoints.

Ehrenreich does brooding work as a young man with scars and secrets, letting everything stew inside until it bursts out of him, sometimes violently. Both Sheridan and Huston are a mixed bag, building characters that never feel like much more than tropes from war movies past. That said, Sheridan’s young age (20 years old as we speak) and vulnerable face highlight the youth of so many of those who serve.

One of the biggest stars of the film is the cinematography by Daniel Landin. Moors and Landin collaborate well, contrasting their soft, pensive aesthetic with quite brutal subject matter. Often, Bartle takes in the nature around him, quickly brought back to reality. These moments, at their best, recall Terrence Malick’s The Thin Red Line and John Toll’s powerful lensing. At their worst, it feels more distracting than anything else.

Aniston, working with the same team that produced Cake a couple of years back, is clearly inspired by this tale of loss, grief and the aggravating bureaucracy it’s all wrapped in. Unfortunately, her character doesn’t have enough of a presence throughout the picture, and the ultimate lessons to be taken away feel fairly standard. She brings emotions to the table, but never feels essential to the story being told. Jason Patric puts in a terribly stale performance as Captain Anderson, on the hunt for Sterling and Bartle who may have answers to Murphy’s whereabouts.

Moors is a filmmaker with immense talent, as demonstrated in his Sundance film Blue Caprice from a few years back, but the beats don’t quite align this time around. This kind of film is important and should be made and made often. Perhaps the problem is that this kind of film has been made, and made often, and made a bit better.

The Yellow Birds premiered at the Sundance Film Festival and opens on June 15, 2018.