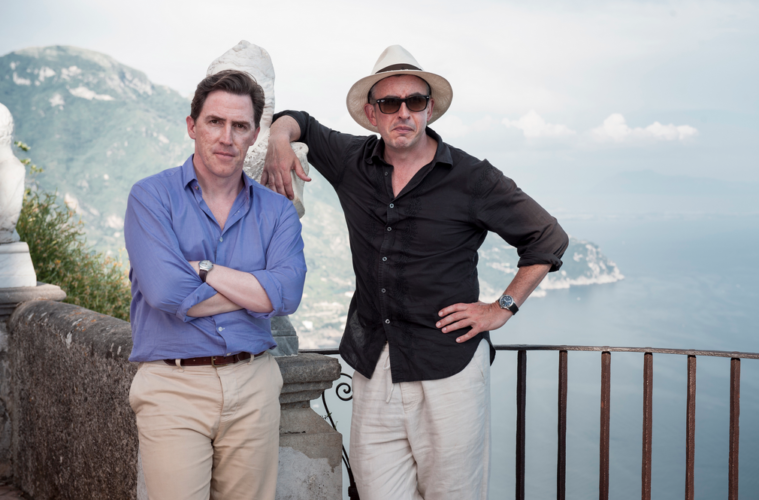 [Sundance Review] The Trip To Italy

If all one needs to make a movie if a girl and a gun, as per Godard, then perhaps all you need to make a good comedy is two guys in a restaurant, talking about nothing.

That’s the basic gist of Michael Winterbottom‘s The Trip and the basic gist of his sequel, The Trip To Italy. Returning are comedian-actors Steve Coogan and Rob Brydon, this time traveling around Italia to eat well and write well as a follow-up to the foodie piece they wrote (or rather Rob wrote) the first time around.

For fans of the first film, you’ll get your bevy of celebrity impressions from the two men, varying from great to purposely dreadful. There’s a particularly engaging bit on Bane’s voice in The Dark Knight Rises. Not unlike the first film, Winterbottom operates in the small details, fully aware of each performer’s strengths. Coogan excels like few others in dry, vain comedy, Brydon countering with large, outgoing comedy that’s sometimes broad, sometimes insightful. As the duo drive their rented Mini Cooper across the Boot (yes, there’s an Italian Job joke to be made, and it is), cinematographer James Clarke (who also shot Winterbottom’s superb Everyday) captures the countryside in its most romantic light. The only thing that looks more appetizing than the country is the food.

General tomfoolery does give way to pockets of emotional resonance. While Rob’s acting career is moving in the right direction, his marriage falters, leading to some temptation from a particularly beautiful local woman. Steve, whose estrangement from his family lined the original installment with some tragedy, is determined to retrieve what he’s lost, reaching to his older son in the middle of the trip.

As derivative as this film may be to its predecessor, funny is funny. What’s more, all of these guys are smart enough to know that the greatest comedies ever made have a hint (sometimes more than a hint) of sadness dusted throughout. Coogan has emerged as one of the most impressive comedians-turned-dramatic actors in the game, evidenced clearly in last year’s Philomena. Brydon serves as the perfect foil for Coogan, bringing out the best of both sides of the veteran performer.

In short, The Trip To Italy is more of the same. Thankfully, what’s the same is very, very funny and heartwarming.

The Trip to Italy premiered at Sundance Film Festival 2014 and opens this summer. One can see our full coverage of the festival below.