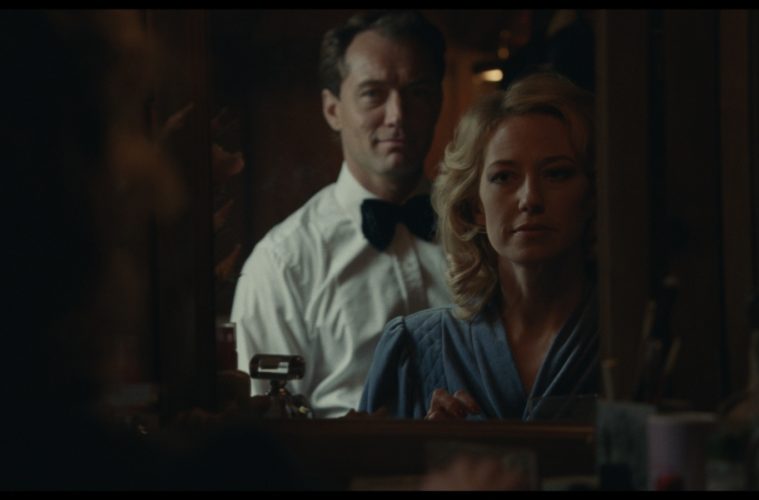 One of Sundance’s most stunning break-outs in the past decade was Martha Marcy May Marlene, Sean Durkin’s remarkably crafted, psychologically deft exploration of an upstate New York cult starring Elizabeth Olsen. After nearly a decade, the director finally returns to the festival with his feature follow-up The Nest, another exquisitely mounted drama that revels in letting minute character details slowly become elucidated as Durkin puts trust into his audience to pick up the pieces along the way. In peeling back the layers of a fractured family and the soulless drive for wealth, the emptiness underneath is patiently revealed, so much so that it backs itself into a heavy-handed corner.

Set in 1986, the O’Hara family seemingly enjoy their nice life in a New York suburb. Rory (Jude Law) and Allison (Carrie Coon) raise their children Benjamin (Charlie Shotwell) and Samantha (Oona Roche)–Allison’s daughter from a previous relationship–with just the right amount of attention, complete with soccer matches outside and entertaining dinner chatter. When Rory gets the opportunity to move back to his native home country of England to return to former colleagues, the rest of the family agrees with some hesitation. Their new home is a massive, weathered manor, full of secret doors and hiding places, set on a sprawling estate. Right from the bat with the opening credits font, there are indeed Kubrickian touches, from Durkin’s formal control (including a few well-timed crossfades) to the way his script picks at the subtleties of human behavior. Yet, while this set-up has the right ingredients for quality gothic horror, the only dread on display is tied to the way Rory’s blind, hopeless yearning for status and money causes his family to crumble.

Cinematographer Mátyás Erdély, best known for his frenetic, claustrophobic portraits of chaos such as Son of Saul and the Durkin-produced James White, shows a different side here. Until some use of handheld in the third act to match the familial ruination we witness, virtually every shot prior is a wide master that steadily opens up the spaces on display and lets the story carefully unfold amongst them. It’s a similar approach to Durkin’s last feature, which also had a sole central location, but he’s clearly been given more budget here and the production design shows, juxtaposing the sleek, empty surfaces of Roy’s office life with the isolation felt throughout their vast, creaky home. Richard Reed Parry’s haunting score also plays into the unsettling atmosphere, which is rendered with splendid detail.

Law is well-cast as the smarmy, charming commodities trader with an empty, wayward soul. As he chats his way through utterly hollow business-minded conversations, Durkin excels at painting him as a man who literally doesn’t know any other way as he tries to fill a meaningless hole in his life. Where Durkin’s script trips up is the thuddingly obvious metaphor of Allison’s horse, shipped over from the U.S. and is now living a life as isolated as the rest of their family in their newly built stable–one that Rory didn’t have the money to pay for. Disregarded by the family, the horse becomes a symbol of the festering sickness pervading Roy’s life as he ignores what is most important right in front of him. For as understated as the rest of the script is, it’s a strange decision to key into such a clear-cut allegory, and particularly in how snowballs even larger in the third act.

As Allison, Carrie Coon steals the show. Introduced as a timid, obedient wife who trusts her husband to provide for her and her family, things begin to shift as new details begin to add up. As her world comes crashing down, she delightfully blossoms and decides to take on independence on her own terms in richly satisfying, emasculating ways. From the initial realization that Rory lied to her–he went after this position in London, it wasn’t offered to him–to the ways in which her sycophantic husband is trying to posture as a prosperous success in his field, Coon’s priceless reactions and maneuvers to establish a semblance of power in their marriage will certainly be meme’d as the film finds a wider audience.

The Nest may not reach the sustained highs of Martha Marcy May Marlene, but there’s still a great deal to admire in the way Durkin’s total mastery of composition and perspective carry through to the final shot. A measured exploration of marriage and the ways in which it can all crumble through dishonesty–as well as a look at the mindless, soul-sucking rat race of capitalism–The Nest is another clear-eyed drama from Durkin that shows genuine vision. The finishing of the narrative puzzle isn’t as graceful as the mindful setting of its pieces, but this is a rare director who has something compelling to convey with each choice he makes behind the camera. It’s invigorating to see his return, and here’s hoping the wait for his next film won’t be as prolonged.