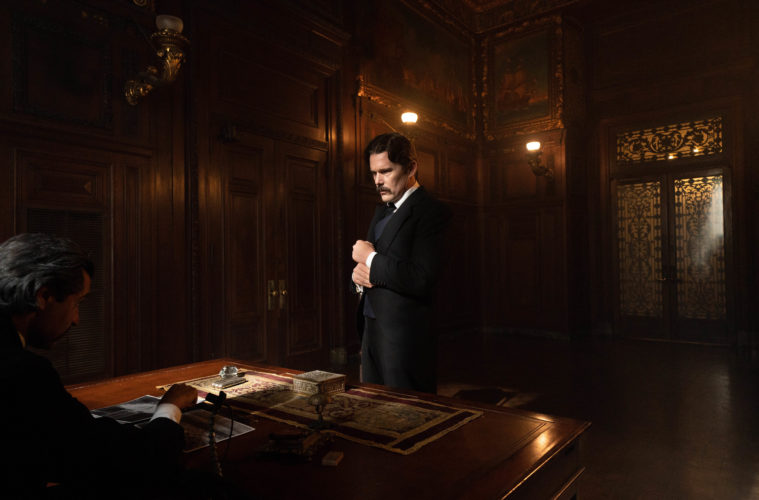 A Michael Almereyda film can be a special thing. A few years back, the writer/director gave us Experimenter, an impressive kinda-biopic of Stanley Milgram starring Peter Sarsgaard and Winona Ryder. Two decades ago, Almereyda rendered an arresting, modern take on Hamlet. Just as Ethan Hawke was his Prince of Denmark then, so is he Nikola Tesla now.

Tesla plays a lot like Experimenter in its use of minimalist production design in parts (perhaps forced by budget) and exciting flights of fancy in others. Almereyda has been a Sundance mainstay for much of his career and it makes sense. His films are a testament to the independent spirit. Limitations be damned! The messy creativity on display is something to admire.

Here we follow Tesla as he leaves his job working under Thomas Edison (Kyle MacLachlan, a joy) to pursue some radical notions. He connects with businessman and Edison rival George Westinghouse (Jim Gaffigan, sporting a great mustache), to whom he sells the rights to his AC induction motor. What follows is a series of ill-advised financial decisions, a lack of focus in personal relationships, and an endless stream of futurist inclinations that leave our titular character alone in his own head.

Hawke is smart to hedge his accent work a bit, only slightly playing into the inventor’s Croatian-born intonation. It’s a devoted performance, far more concerned with personifying the obsessions that drove the man rather than doing any sort of presumed imitation. How interesting that the inventor has been portrayed three separate times by actors (Hawke, Nicholas Hoult, David Bowie) of vastly different ages and styles–all within the last fifteen years. Hawke has become one of our most accomplished, most reliable performers. No matter the film, he’s locked-in at all times.

While Tesla is full of the anachronisms one would expect from an Almereyda picture, the historical accuracy is legitimate. And when it’s not, a character will say so. Often this task falls to Eve Hewson, playing Anne Morgan, the daughter of financier J.P. Morgan (Donnie Keshawarz), who gives Tesla $150,000 in 1900 to build a wireless communication system. Every so often, the film will cut to Ms. Morgan sitting in front of laptop offering additional details to the narrative or slight corrections. In one particularly funny scene involving ice creams cones, she comments: “This probably didn’t happen.” Her’s is something of a dual role. As Anne (unsuccessfully) pursues the beginning of a romantic relationship with Tesla, she also remains the story’s narrator. It’s a quite complicated ask of the young actress, and she excels impressively.

Frankly, one wishes there was a bit more brevity throughout. Somewhere in the second act things slow down a bit, the picture ultimately reenergized thanks to a karaoke scene viewers will not soon forget. Tesla is the kind of film you hope to see at Sundance: an unapologetically ambitious, unwaveringly singular take.